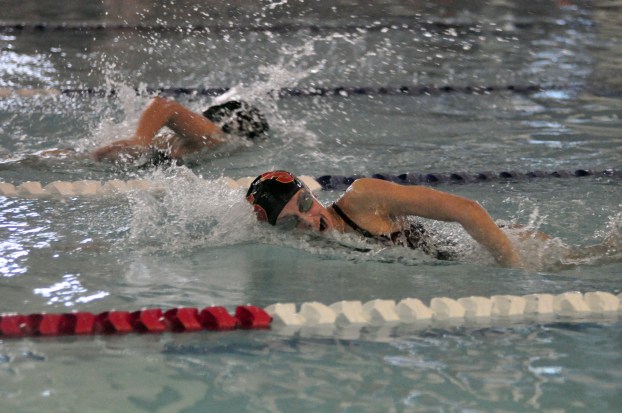 The Salisbury High School women’s swim team arrived at the Hurley YMCA on Thursday simply as contenders. They left as conference champions. The Hornets outpaced second place Lexington 135-113 in a meet that could only be described as the McKenzie Stevens show.
The Hornets began the meet in impressive fashion, winning the 200 medley relay. Shelby Holden swam a solid leadoff leg for the Hornets, but conference foes Marina Moore (East Davidson) and Taylor Blankenship (West Davidson) grabbed the early lead. Freshman phenom Sharmi Amin dove in second for Salisbury, catching the Dragon’s Brooke Owens for a slight lead. And then Stevens went to work. She quickly put the rest of the conference in her rearview mirror. By the time anchor leg Amelia Steinman entered the water, the race was all but over.
Stevens returned to the water 15 minutes later for a dominating win in the 200 freestyle, defeating runner-up Laura Payne of West Davidson by 24 seconds. She also took home the top spot in the 100 butterfly by 10 seconds. In her final event of the day, Stevens powered Salisbury’s 400 freestyle relay to yet another come-from-behind win.
Despite her obvious success, the Queens University signee was quick to give credit to her teammates. “I wasn’t happy with my times,” Stevens said. “But I was happy with the relays and I was happy with my team.”
The Salisbury star listed off a number of teammates who played key roles in the title effort, notably among them Amin and Steinman. Amin coasted to easy wins in both the 200 IM and the 100 breaststroke, while Steinman garnered a pair of 2nd place finishes in the 50 free and 100 free. In both races, Steinman swam lights out, falling only to East Davidson’s Moore.
But if Stevens was the athlete of the day, the race of the day was less noticeable, perhaps because Stevens wasn’t even in it…or perhaps because it wasn’t even for a first place. Callie Alexander entered the meet the fourth seed in the 100 breaststroke with a 1:29. Charging through the last 25 with a ferocious closing kick, Alexander passed Lexington’s Sydney Parker and West Davidson’s Rachel Hamrick for second place behind Amin, slicing four seconds off her time. The 1-2 punch was too much for Lexington to handle.
In a testament to the quality coaching of Ryan Starrett, Alexander wasn’t the only Hornet with a heroic race. For a small team that has too often found itself swamped by numerically superior opponents, Starrett’s squad showed off some quality depth of its own on the right day. Allie Knorr fended off Lexington’s Meredith Groce for a third place in the 500 free, while Shelby Holden (seventh in the 200 free and fourth in the 100 back) and Nellie Brown (fifth in the 100 free and seventh in the 100 back) picked up valuable points.
The Hornets weren’t the only Rowan team in the pool. Sallie Hundley’s North Rowan Cavaliers also had a solid showing. Samantha Pritchard had a fantastic outing in the 200 IM, finishing second. Though no one touched Amin in the event, Pritchard came into the race as part of a pack of four girls with times in the 2:50s. But Pritchard made a statement early in the race, finishing the first lap a full two seconds ahead of third place Blankenship. She never let up, burying Blankenship over the final three laps to earn her silver medal with a 2:48. North also got a strong performance from Rebekah Horning, who finished fourth in both the 200 free and 100 free.

GRANITE QUARRY — It was billed as a showdown game, but the East Rowan Mustang girls quickly turned it into... read more