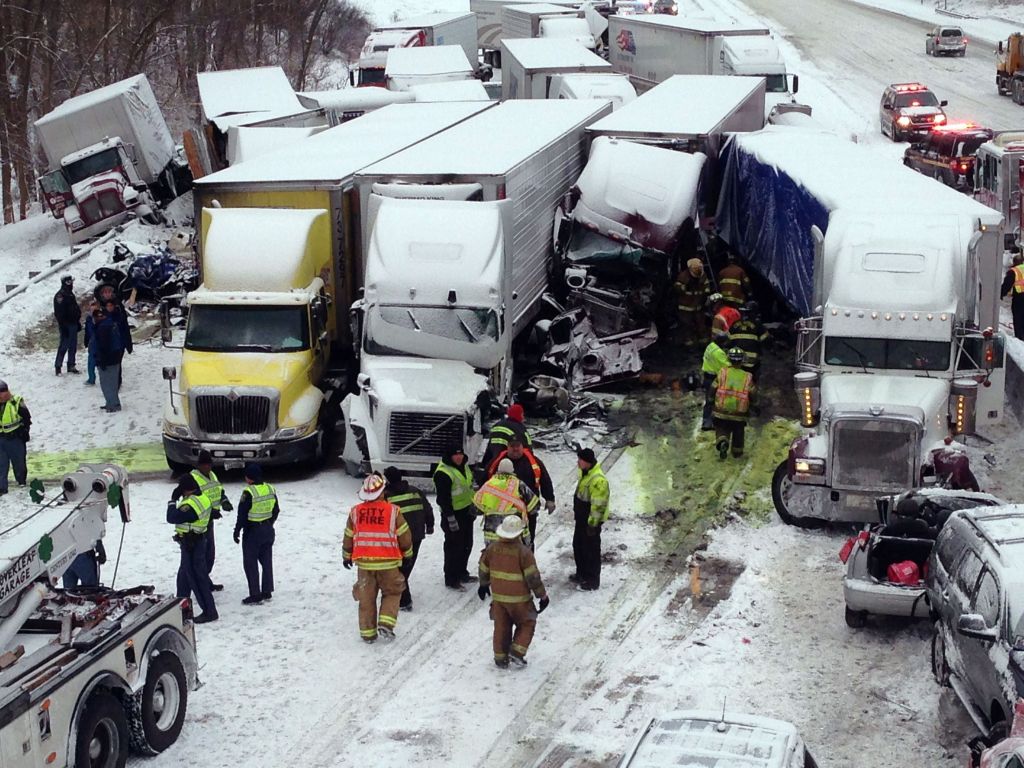 MICHIGAN CITY, Ind. (AP) — A couple from Michigan and a man from Chicago were killed in a massive pileup on a snowy interstate in northwestern Indiana, authorities said Friday, as crews cleaned up after the 40-plus-vehicle wreck.
More than 20 people were injured in the crush of semitrailers and mangled passenger vehicles Thursday afternoon on the eastbound stretch of Interstate 94 connecting Chicago with Detroit. Two of those are critically injured, Indiana State Police Sgt. Ann Wojas said.
Conditions very quickly changed from clear to near-whiteout at the time of the crash. State police Lt. Jerry Williams said there was a sudden burst of heavy lake-effect snow that took everyone by surprise.
“As these people came into that whiteout condition, it became that environment where they couldn’t see each other,” Williams said at a Friday news conference.
Thomas Wolma, 67, and his 65-year-old wife Marilyn, were killed in the crash, LaPorte County coroner John Sullivan said early Friday. The Wolmas, of Grand Rapids, Mich., were returning home after taking care of a relative in Wisconsin when they were caught up in the massive crash, Sullivan said, citing the couple’s son.
Sullivan said Jerry Dalrymple, 65, of Chicago, was killed in his car, along with his dog.
Two box trucks and 18 semitrailers were among the 46 vehicles involved in the wreck near Michigan City, about 60 miles from Chicago, Wojas said at the news conference.
The eastbound lanes of I-94 remained closed Friday morning as crews continued working to clear the scene, state police Cpl. Larry Koebcke said. Cranes and wreckers were brought in to help remove the wreckage, and officials haven’t estimated when all the lanes will reopen.
Drivers stuck in the backup Thursday could only wait and try to stay warm as temperatures hovered around 10 degrees.
Stacey Johnson, 37, had a family emergency and was traveling from western Michigan to Tennessee with her three sons, ages 3, 9 and 10. She told The Associated Press she’d researched road conditions before leaving because she was worried about the weather. She didn’t know about the accident until traffic started crawling and then stopped.
Nearly five hours later, long after she’d planned to stop for dinner, her car was still sitting on the westbound side of the highway. A woman in the car next to hers noticed she had children with her and offered cereal, popcorn and fruit to tide them over.
Scott Collins, 17, of Chesterton, Ind., was riding in a car with three other teens and saw the crash happen just behind them.
“One of the semis started sliding and I think it jackknifed in the middle of the road” and collided with another semi, he said. “After that happened, multiple semis locked up. … We were pretty nervous.”
Indiana State Police Sgt. Ann Wojas said 20 to 30 people were injured, including one with life-threatening injuries and another who was flown by medical helicopter to a hospital.