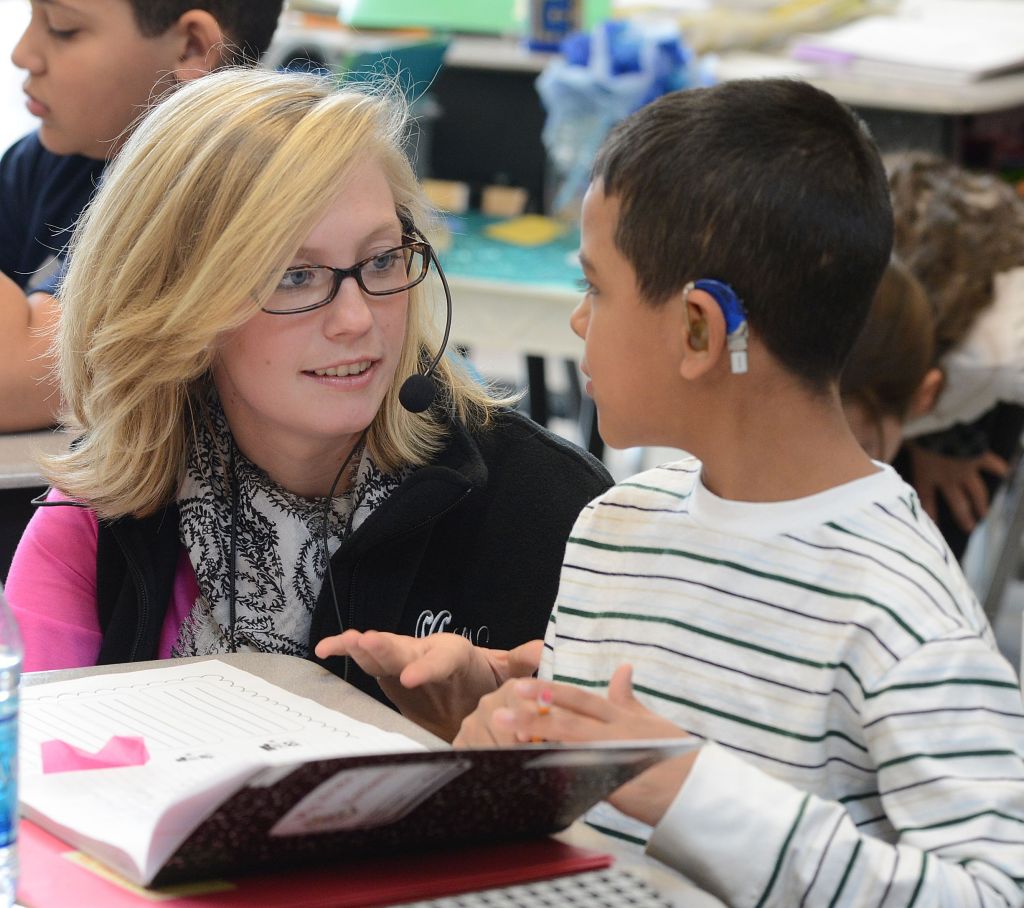 HENDERSONVILLE (AP) — This year, Mills River Elementary third-grader Danny Castro, 9, got a very special present from his school.
School officials purchased an FM-based wireless system that allows the hearing-impaired youngster to hear his teacher, Julie Ann Mitchell, through his hearing aids.
Every day the gregarious boy enters school, hooks up his hearing system and prepares to learn. Mitchell uses a microphone and a palm-sized wireless transmitter that hangs around her neck to reach the receivers in Danny’s hearing aids, allowing him to listen to her lessons at a higher decibel level than he otherwise could.
“Whenever she speaks on the microphone, it connects to my ‘boots’ (receivers in his hearing aids), and it’s cool because you can hear what she is saying,” Danny said on a rainy Friday morning after he finished reading a book passage to a classmate. “I use it to help me hear better.”
Until this year, Danny had been using a similar system his parents had purchased and sent him to school with every day since kindergarten. The new technology, however, can be left at school.
Mitchell said “Danny is excelling this year. With his hearing loss, he works with a speech therapist and he has come a long way.”
Learning vocabulary, math or any other third-grade subject “would be difficult for him” without the sound-amplifying apparatus, Mitchell said. “He would miss about 80 percent of instruction without the hearing aid and the FM system. Without the system, it would be a struggle for him and his vocabulary would suffer.”
She added that Danny’s parents have been very conscientious about making sure he has the proper technology to aide his learning. “They have been working with his doctors and audiologists to make sure he is receiving the help that he needs,” Mitchell said. “He has become used to it over the years, so it’s very much second nature to him. It’s part of his everyday life.”
Mitchell said Danny will often take the initiative to charge the system or initiate it in the morning before class starts.
“He is a very outgoing, very sweet and eager student,” she said. “He wants to get his work correct, so he works very hard.”
Fellow students think the system is “cool,” she added. “They see that it is helping one of my students and because they have been in class with him for years, they have been very accepting.”
Mitchell said several other hearing-impaired students at the school use systems to help them hear their teachers. “One student has a tower speaker that sits on the floor” and amplifies the teacher’s voice, while another has a desktop speaker that accomplishes the same mission.
“With this system Danny, has really grown over the years,” Mitchell said. She would like other school administrators to know that it is “easy for students who have hearing loss to receive help with some sort of FM system in order to grow academically. Without it, there’s a lack of vocabulary and compensation with anything being taught. Our school has been working hard in the past year, and we were fortunate to get the system this year.”
Danny said he likes the system “because wherever Mrs. Mitchell goes, the speaker follows her and moves with her so I can hear her. I also like it because it connects to the computer speaker so I can hear it better. Without it, I would not be able to hear Mrs. Mitchell and if I can’t hear her, then what kind of lessons can I use?”