Some gave all: Scout’s Eagle project will provide memorial for Marine killed in Iraq 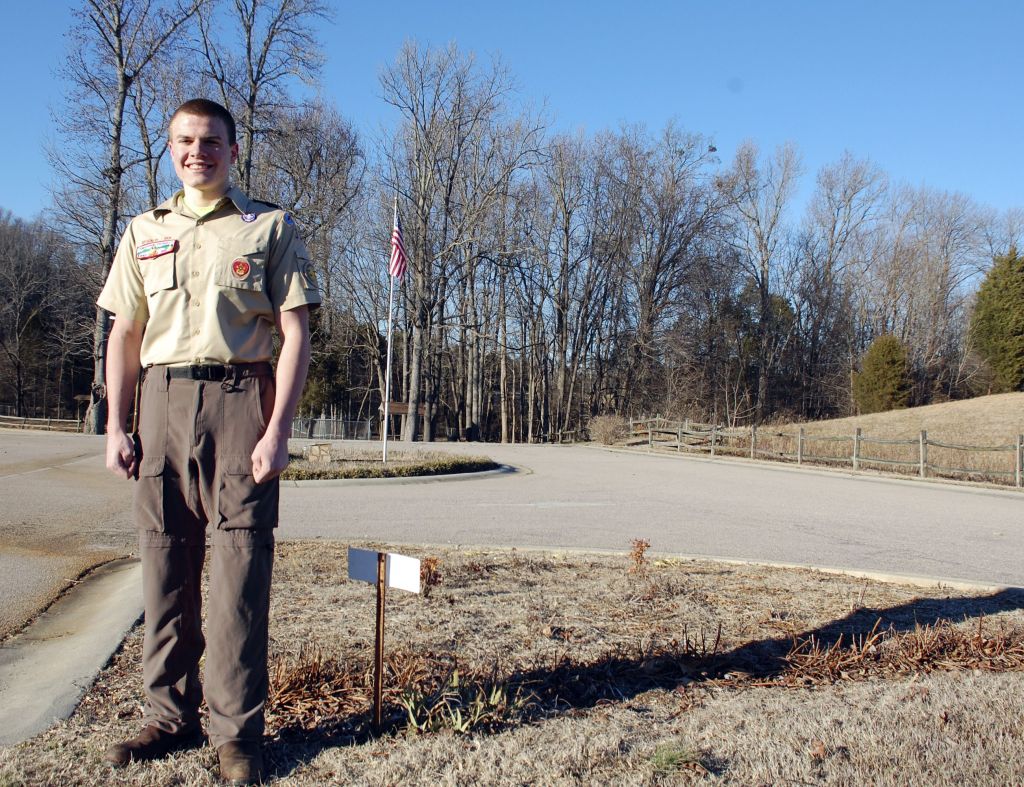 ROCKWELL — Long, winter shadows cross Rockwell Park as Faris Rogers sits at a picnic table and talks about someone he never met.
Rogers motions toward a hill beyond the park entrance. Nathan Elrod lived on the other side of that hill.
“I’m pretty sure, at one time or another, he came and played at this park,” Rogers said.
Lance Cpl. Nathan Elrod, a Marine gunner, died Oct. 21, 2006, in Iraq when the Humvee he was riding in hit an improvised explosive device.
Elrod, only 20, was a Rockwell boy and graduate of East Rowan High School, where he had belonged to the Junior ROTC.
Rogers, 17, didn’t know Elrod, but for his Eagle Scout project, Faris has set a goal of raising more than $6,000 toward a bronze memorial for the slain Marine.
It’s something to let Elrod’s family know that the community is grateful for his service and ultimate sacrifice, Rogers says. It’s also a reminder that our freedom isn’t free.
“I don’t want future generations to ever forget,” Rogers says. “… All gave some, but some gave all — that’s not my quote.”
The bronze tribute — the standard memorial for fallen troops, including a helmet, assault rifle and boots — will stand 42 inches high and include a base and inscription for Elrod.
Powles Funeral Home is helping Rogers in ordering the memorial.
Rogers also will be doing the landscaping — mulch (provided by the town), shrubbery (from Rufty Garden Shop), potting soil and rock.
Rogers and his father, Cameron, an assistant Scoutmaster for Troop 333 at St. Matthew’s Lutheran Church, first visited Elrod’s parents to make sure the idea for a memorial was OK with them.
It was. Rogers then met at the park with town officials in early October 2013 and received Rockwell’s nod to install the memorial.
A district Scouting committee then approved Rogers’ Eagle project in November.
But the toughest part remains — raising the funds for the memorial. “That’s my worst thing, asking people for money,” Rogers says.
He has been writing letters, making telephone calls and walking into businesses to pitch his project.
Rogers has concentrated first in Rockwell, but his father thinks he’ll have to expand his efforts into the Salisbury area.
“One way or the other,” Cameron Rogers promises, “he’s going to get this done.”
Faris Rogers devotes himself to the outdoors.
He loves hunting and fly fishing. He shot his first deer on Black Friday, the busiest shopping day of the year. As Rogers describes it, “I was doing some grocery shopping.”
Rogers’ other interests extend to hiking, kayaking, rock climbing, boating and all that Scouting entails.
“I don’t stay inside, that’s for sure,” he says.
A junior at Rockwell Christian School, Rogers wants to attend community college for two years before enlisting in the Coast Guard and learning to pilot helicopters.
Faris comes by his interest in the military honestly. His favorite books are biographies of Navy Seals.
His late maternal grandfather, Edwin Caudill, was a full colonel in the Air Force. His late paternal grandfather, also named Faris, was an Air Force master sergeant and for 18 years was the boat captain on the vessel that transported officers between Bolling Air Force Base and the Pentagon.
Both grandfathers are buried in the Salisbury National Cemetery.
Cameron Rogers also was a sergeant in the Air Force, and he hinted to Faris that a memorial tribute to Elrod might be a possible Eagle project.
“I took it from there,” Faris says.
Rogers is shooting for a summer dedication because he will age out of Scouting on his 18th birthday Aug. 8.
The memorial will sit in a spot at the entrance to the park’s parking lot — between the well and flagpole.
“I feel like it’s something I’m not doing for me,” Faris says.