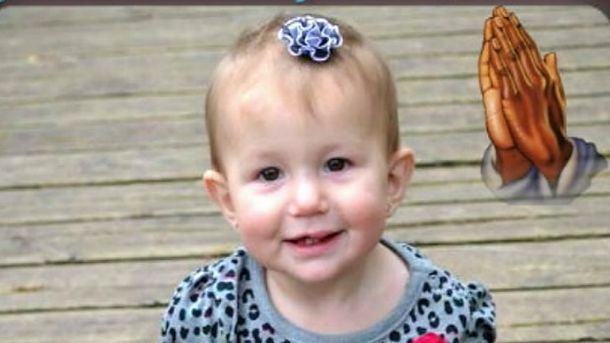 KANNAPOLIS — The mother of a 15-month-old girl beaten earlier this week says her daughter died in her arms at the hospital Wednesday.
Police are investigating the death of Malaya Heun, who apparently was assaulted Sunday night at her family’s apartment in the Running Brook Community of North Kannapolis.
The girl was the youngest of Christy Heun’s four children.
Wearing a Duke sweatshirt and speaking from the door of her apartment Thursday night, Heun said, “I want them to find who did this thing to my baby. I want answers.”
Heun, who is separated from Malaya’s father, said she was at work Sunday night when she received a call about the assault.
“She was a precious little girl,” Heun said. “… She should be here with me.”
Overall, Heun was vague about what happened Sunday. She said her sister called her, and she went straight to the hospital, but Malaya never regained consciousness in the days leading to her death.
Heun said she thinks she knows who hurt her daughter, but she can’t believe that person would do it. She added that she has been cooperating with police.
Officials at Carolinas Medical Center in Charlotte contacted Kannapolis Police on Monday “regarding the assault of a 15-month-old female who lived in Kannapolis,” Police Chief Woody Chavis said in a news release.
Malaya Heun was initially taken to the Carolinas Medical emergency center in Kannapolis then transferred to CMC in Charlotte due the severity of her injuries, the news release said.
The Police Department released no other information Thursday afternoon.
“Due to the sensitive nature of this investigation, we are unable to provide any specific information regarding the injuries or potential suspects,” the news release said. “Any information released at this point would be detrimental to the successful resolution of this case.”
Members of the department’s Felony Investigation Unit are interviewing witnesses and collecting evidence, the news release said.
Neighbors expressed shock that something so horrible could happen close to them.
“She was a beautiful little girl,” said Michelle Lowery, who has a 9-month-old of her own. “I don’t believe anyone could do something like that. That’s why I protect my kids.”
Kim and Justin Webb said two of their children played with Heun’s kids all the time, and they often saw Christy Heun coming and going from her apartment.
“I couldn’t imagine anything like that happening to me,” said Kim Webb, who has five children ranging in age from 2 to 10.
Christy Heun said her other children are 7, 5 and 3.
“They’re taking it bad,” Heun said of her children’s reaction to Malaya’s death, “especially the oldest.”
Heun said Malaya’s funeral probably will be held Monday.
Contact Mark Wineka at 704-797-4263.