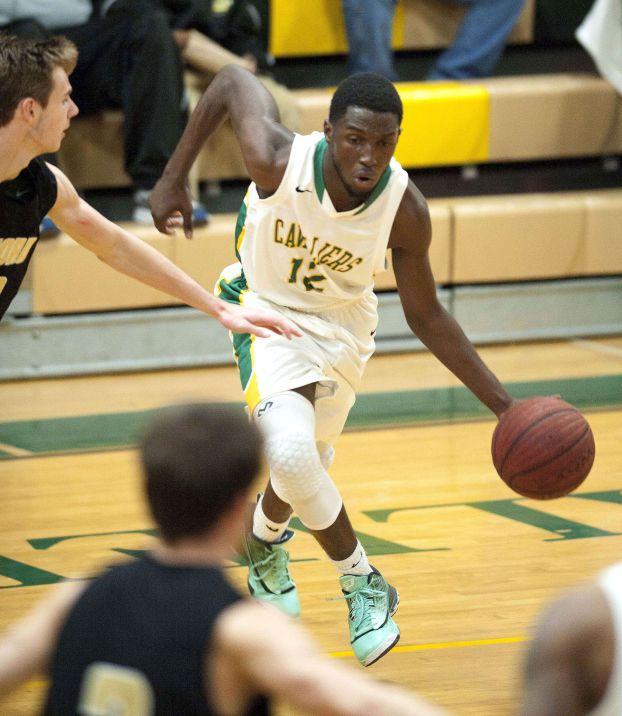 SPENCER — North Rowan has been no stranger to scheduling the top teams in western North Carolina this season.
Less than a week since hosting defending state 1A champion Winston-Salem Prep, the Cavaliers hit the floor against fourth-ranked 3A Concord Wednesday night.
A furious North comeback down the stretch came up just short as the Spiders escaped with a hard-fought 83-78 victory on the road.
“That’s a tough team,” Cavalier head coach Andrew Mitchell said. “When you find teams that can shoot the ball like that and make free throws, it’s going to be hard to beat them. I can know understand why they only have two losses.
“I thought our guys stood up and played. We didn’t make as many shots or get to the free-throw line near as many times as they did,” he continued. “But I told our guys that the last two losses were better than the 40- or 50-point wins we were getting last year at this time.”
At this time last season, the Cavs were rolling over teams into the state playoffs. But when they got into the postseason, they found holes in their team and were pushed around. Mitchell is dead-set on changing that this year.
“Last year, every game we played in January, we won by 40 or 50 points. And when we got into the playoffs, there were little situations that we needed to work on that we weren’t aware of because we never really had to focus on that,” he explained. “Now we know there are some out-of-bounds situations, three-minute situations, two-minute situations and 50-second situations that we need to work on.
“Concord shot the ball better than any team we’ve ever played, but with 15 seconds to go, it was a one-possession game,” Mitchell added. “These things will help us to come back into practice and focus and work hard and be prepared in March versus winning by 50 and getting into the playoffs and getting beat up a little bit and not being able to take it.”
The Cavaliers were able to take it and even dish it out in the first quarter against Concord, matching the high-powered Spiders point-for-point.
North grabbed its first lead of the night on a Michael Bowman layup at 6-5 and led 20-17 late on a Michael Connor 3-pointer. A trey by Concord’s freshman phenom Ty-Shon Alexander tied the game at 20 after one.
The Spiders built up a six-point halftime cushion, but North kept battling, led by Connor. The senior scored six quick points after the break to trim the deficit down to two at 49-47.
After taking a 59-51 advantage into the fourth quarter, Concord’s lead hit double-figures on a Connor Burchfield 3-pointer as the Cavs found themselves in a corner.
Connor continued his career night and led the charge, reeling off five straight points to bring North back within five at 69-64. Connor then converted a three-point play before drilling a long triple that cut the deficit to 81-78 with 30 seconds to play.
The Cavs had two chances at tying the game with time winding down, but two shots in the paint hit iron as the Spiders added two insurance free throws to seal the 83-78 win.
“We just made a couple mistakes down the stretch and it cost us the game,” Connor, who turned in a career-high 31 points, said. “Playing a team like this will get us ready for the playoffs. It feels good to play against good competition because in the playoffs we’ll know what to do down the stretch.”
“I thought our guys played well, but when you have guys knocking down 3s from 30 feet, what do you do?” Mitchell asked. “We can normally switch into the right defense to slow a team down, but we switched into every defense that we have but they were still able to get off good shots.
“I told our guys that I appreciated the effort they gave and that if we can continue to work like we have the past two weeks, I can see us in Raleigh or Chapel Hill right alongside Concord in March.”
The Cavs return to CCC action Friday night against Thomasville.
“We need to bring it every night and not take any days off,” Connor said.