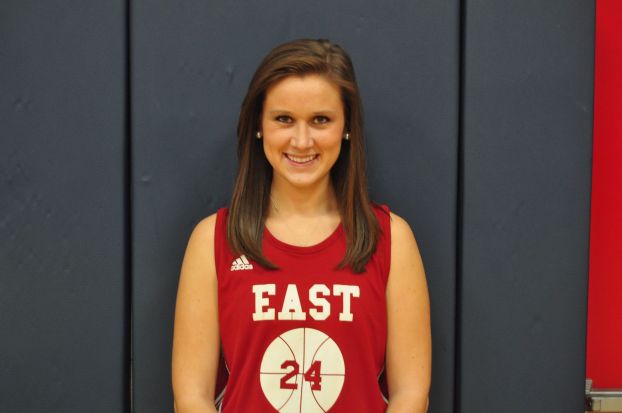 GRANITE QUARRY — It was billed as a showdown game, but the East Rowan Mustang girls quickly turned it into a bold statement.
In a battle for first place in the South Piedmont Conference Wednesday night, East broke out of the gate in a big way and dominated all phases in a 70-44 win over Central Cabarrus. The red-hot Mustangs (13-3, 9-1) shot 56 percent from the floor, blocked 17 shots and never trailed. The Vikings (9-8, 7-2) tried to respond with their swarming pressure defense but never mounted a serious threat.
“We knew coming in this was going to be one of our toughest games,” senior guard Lauren Thomas noted. “We knew we had to come out fast and we did. We played as a team. It was just a fun game.”
Thomas was one of many stars for the balanced East attack as she led the way with 20 points including three of five from behind the arc. The inside duo of Kelli Fisher (6-foot-3) and Karleigh Wike (6-4) controlled the lane at both ends in their own special ways. Fisher powered for 14 points to key the 20-3 start East enjoyed in the first period.
Wike, who surpassed the 1,000 point career mark Tuesday night, added eight more in the win. But more importantly she grabbed nine rebounds and blocked 10 shots. Her rebound basket at the first quarter buzzer closed out a 12-0 run and gave East a 17-point lead.
Fisher, who scored 10 of her points in the opening period, added five blocks of her own.
“We realize our defense creates our offense so we have working real hard on that and protecting the rim,” Fisher said. “I was really impressed with our team tonight. We stepped up to the challenge.”
The Vikings played East on even terms in the second quarter to trail 35-18 but a pair of Thomas long range bombs to open the second half keyed a 16-5 run that put the Mustangs firmly in control at 51-23.
Led by point guard Jocelyn Lowe, East was able to solve the Viking full-court pressure for easy transition baskets. On the other end, Central tried repeatedly to drive inside only to have their shots blocked by Wike and Fisher.
“We wanted to come out and make a statement that we belong at the top of the conference,” Mustangs coach Danielle Porter stated. She praised Lowe and Thomas for directing the offense against the press and her inside players for defending the rim. “It was a great overall effort.”
The Vikings did have to play the game without the services of their star freshman point guard Mahaley Holit (17 ppg.) due to injury but it may not have made a difference on this night.
Forward Justice Wallace led Central with 15 points while freshman Elanna Peay added eight. Center Sophia McFarlane had six but her biggest contribution came inside against the twin East towers as she grabbed 12 rebounds, nine of them on the offensive end.
For the game, East did out-rebound the Vikings 38-35 but Central had a huge advantage on the offensive glass with 25 boards.
Central Coach Brandon Blalock felt his team was its own worst enemy.
“We made a lot of silly mistakes and we kept shooting ourselves in the foot,” Blalock said. “If you miss free throws like we did, and turn the ball over that many times, you are not going to win too many games.”
The Vikings committed 30 turnovers for the game, many of them unforced, At the foul line they were 15 of 30 while East was slightly better at 17 of 33.
East now has a 1.5 game lead in the SPC and will try to stay there this Friday with a trip down to Concord High. The Vikings travel to Hickory Ridge Friday.