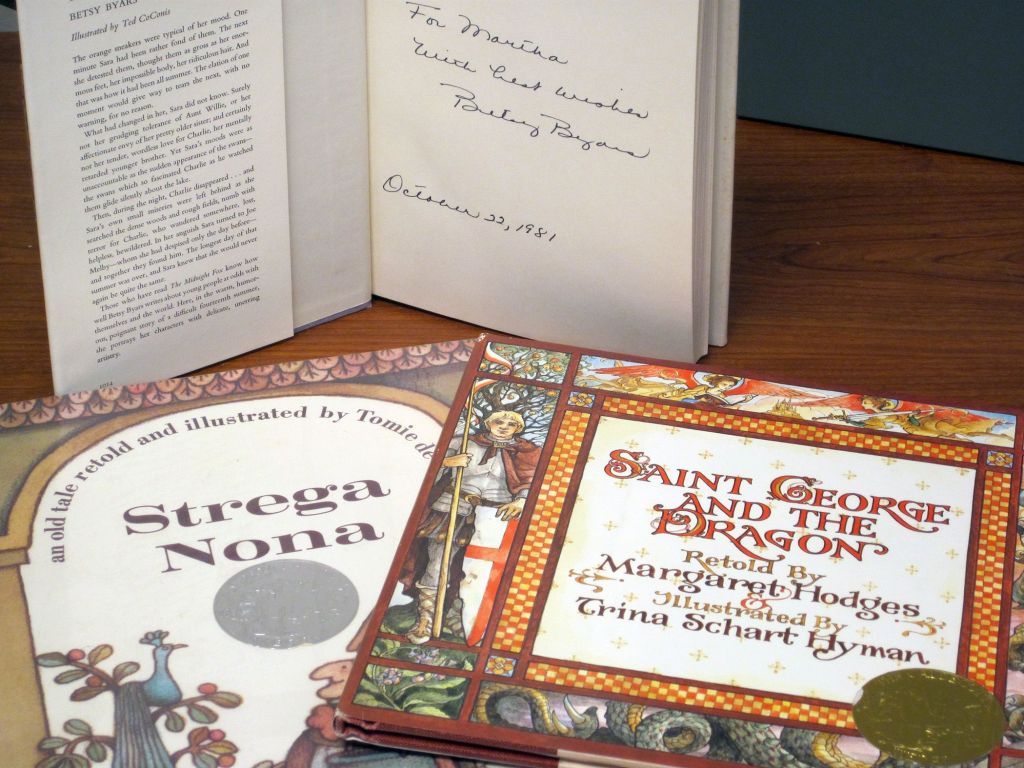 There are Caldecott Award winners, Newbery Award winners and Coretta Scott King Award winners among the 70 autographed children’s books that Martha West recently donated to Catawba College. For West, a 1959 alumna of the college and a former faculty member who taught children’s literature for 15 years in Catawba’s teacher education department, the donation completes a full circle in her life.
“When I was growing up on Catawba’s campus, I would go over and check out books from Catawba’s children’s section and I had the library almost to myself,” West explained. “Then I taught children’s literature at Catawba. I bought these books for me, but I always intended to give them to Catawba. I don’t know why it took me so long.”
West, the daughter of Catawba’s legendary football coach Gordon Kirkland, spent the first 12 years of her life on the campus of Catawba. She graduated from Catawba with an English major and history minor. She later went on to earn her master’s of education degree and her Ph.D. in elementary education from the University of North Carolina at Chapel Hill.
During her long career in education, she held three different positions. Her first job was as an elementary school (fifth grade) teacher in the Charlotte-Mecklenburg School system. Her second, which lasted 16 years, was as a member of Catawba’s faculty. Her third, which lasted 18 years, was as director of elementary education for the Rowan-Salisbury Schools.
West took a sabbatical from Catawba in 1977 and went to the University of Georgia to take classes. One of those classes was in children’s literature. That class brought children’s author Doris Buchanan Smith, who wrote “The Taste of Blackberries,” to the Athens, Ga., campus. West heard her speak and observed Smith interact with children about her book.
“I thought we could do something like this in Salisbury,” West remembered.
She wrote Smith directly and invited her to come to Catawba and make visits into the Rowan Salisbury Schools. Smith did in 1978.
“It was always a joint project among Catawba, the Rowan-Salisbury Schools and the Rowan Public Library,” West explained of the effort that brought first Smith and then other children’s authors to the community.
“At the beginning, we would go to one central school and groups from other schools were brought over by bus. After the fourth grade writing test began, we encouraged the children to write books. Then we would bring groups of children to the Catawba campus to hear the author talk about how they got their ideas for their books. Then, the kids got to read their books to each other and talk about them and how they got their own ideas for their books.”
This annual children’s author project began in 1978 and continued after West left Catawba to join the Rowan-Salisbury School System in 1981 and for several years after she retired from the school system in 1999. West and her friend, Elda Buxton, even founded a local Children’s Literature Guild as a grassroots way to support the annual author project.
“We were excited about all of the authors who visited. It was an exciting time for all of us and especially for the children,” West, who now serves on Catawba’s Board of Trustees, said. “I hope that those children who participated and who are now adults remember that they got to meet a real author.
“I think it is so important to make learning memorable and this was so different from anything else they (the students) were exposed to. It was a good example of creative teaching.”
Some of the authors who visited and whose autographed books West donated to Catawba’s Corriher-Linn-Black Library include Doris Buchanan Smith, Carole Marsh, Robert Burch, author of “Queenie Peavy” and “Christmas with Ida Early”; Peggy Parish, author of Amelia Bedelia books; Pat Cummings, Nancy Roberts, Kenn and Joanne Compton, Gloria Houston, M.C. Helldorfer, Jack Gantos, John Reynolds Gardiner, Andrea Davis Pinkney, Newbery Medal winners Betsy Byers, author of “The Summer of Swans,” and Katherine Paterson; and Caldecott Medal winners Gail Haley and Brian Pinkney.
Dr. Steve McKinzie, director of Catawba’s library, welcomed West’s donation of children’s books and said it added some new titles to the college’s already robust collection. As soon as the books are cataloged, they will be available to patrons of the library. Then, only these books’ telltale autographs from their authors to West will belie their history and the path that brought them into the library’s permanent collection.