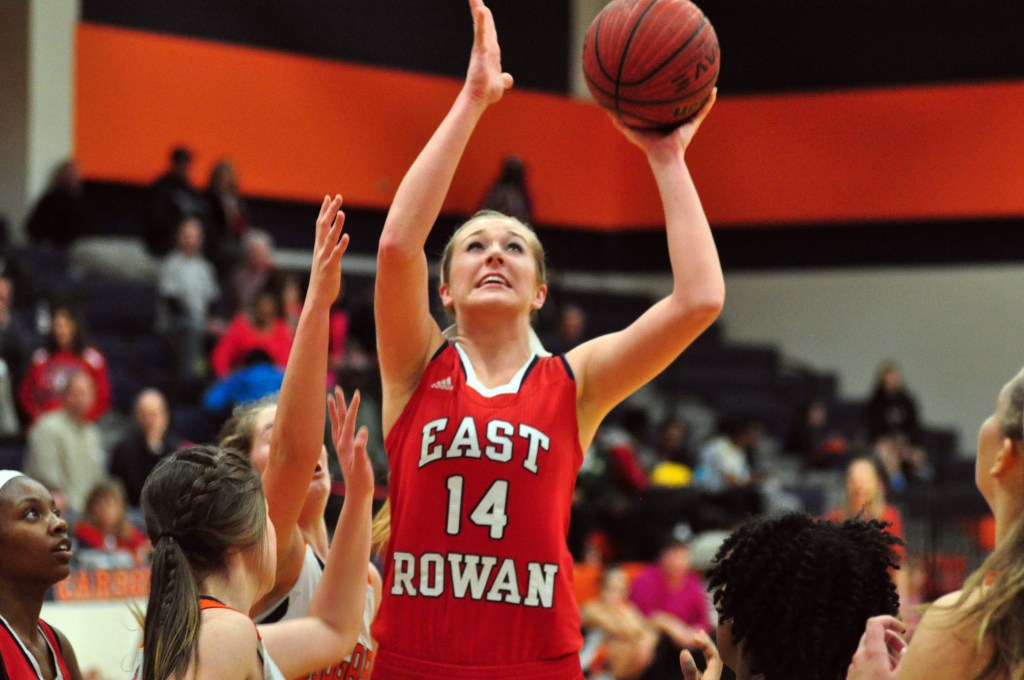 CHINA GROVE — No one needed more proof, but Karleigh Wike provided it anyway.
The East Rowan senior reminded everyone what a special player she is in Tuesday night’s 64-48 SPC triumph at Carson.
“You always want to do whatever you can to help the team win,” the 6-foot-4 forward said. “If it meant me scoring 1,000 points tonight, then that’s what it is.”
Wike shot 9-for-17 from the field and had a season-best 27 points, boosting her career total to 1,016. She added 15 rebounds and seven blocked shots as the Mustangs (12-3, 8-1) crept back into first place.
“I told her before the game, ‘Just go out and play your game and everything will fall into place,’” said East coach Danielle Porter. “And she did. Defensively, she was an animal. We rely on her a ton for that.”
The game was stopped momentarily after Wike sank the first of two free throws with 29 seconds remaining in the first half for career point No. 1,000.
“I thought she had a career night tonight,” CHS coach Brooke Misenheimer said after the Cougars (7-9, 5-5) dropped their second straight SPC decision. “Or at least her best game of the season. She lit it up, unfortunately for us.”
East found itself trailing 16-13 after Carson’s Sydney Huffman hit an over-and-under layup early in the second quarter. The Mustangs responded by scoring the last 14 points of the first half, the last two when sophomore Amani Ajayi coralled an offensive rebound and hit a putback as the buzzer sounded.
“I feel like boxing out killed us,” Huffman said after scoring 15 points. “It’s like we listen to our coach — but we don’t. We could have made smarter decisions.”
East padded its lead to 29-16 when Kelli Fisher snagged an offensive board and sank a layup as the third quarter unspooled. Wike scored nine fourth-quarter points, mostly on lob passes to the inside, before leaving the game with about two minutes to play.
“That’s always been the game plan,” said guard Lauren Thomas, East’s only other senior. “You dish it in to her and you feel confident something good will happen.”
Teammate Shennell Pharr gave ER its biggest lead midway through the final quarter. But when they rolled the closing credits, this night had only one leading lady — and the 15 realtives she brought with her.
“We knew she was gonna get it eventually,” Porter said. “It was nice that Carson let us stop the game so she could bring the ball to her parents. We really appreciate that. I’m just a proud coach.”
East will host second-place Central Cabarrus (7-1 SPC) tonight.
EAST ROWAN (64) — Wike 27, Shen.Pharr 9, Fisher 9, Shen.Pharr 7, Thomas 5, Lowe 4, Ajayi 3.
CARSON (48) — Huffman 15, Allen 14, Cole 10, Gray 9, McClary, Jackson, Clark, Roberson, Van Voorhis, Hunsucker.
E. Rowan 11 16 13 24 — 64
Carson 10 6 12 20 — 48