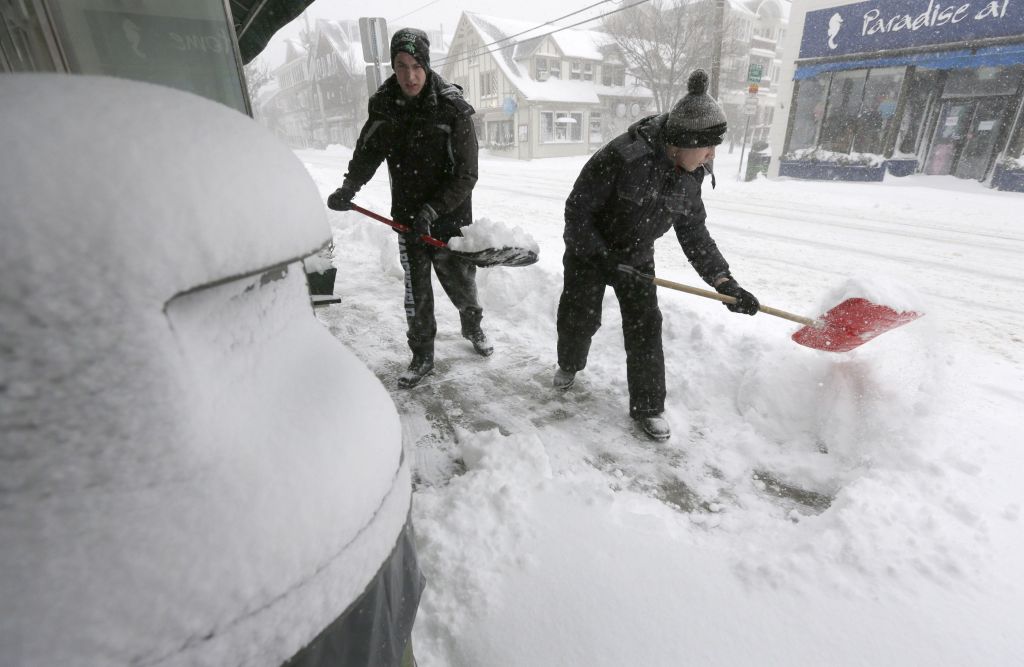 BOSTON (AP) — Snow blowers whirred and shovels scraped across sidewalks on Wednesday as the Northeast started cleaning up from a winter storm that swirled up the coast, creating blizzard conditions on Cape Cod, disrupting government work in Washington and leaving behind bitter cold that sapped fuel supplies.
The huge storm stretched from Kentucky to New England but hit hardest along the heavily populated Interstate 95 corridor between Philadelphia and Boston. Snow began falling at midmorning Tuesday in Philadelphia and dumped as much as 14 inches by Wednesday morning, with New York seeing almost as much. Manalapan, N.J., had the highest snowfall reading with nearly 16 inches.
The storm, which dropped more than a foot of snow in parts of Massachusetts, largely spared Boston and areas west and north of the city, which got about 4 inches. But it was slow-going on roads elsewhere including New Jersey, where speed limits were reduced on the turnpike, and the New York metropolitan area, where authorities cautioned motorists about black ice. Commuters in Philadelphia and New York packed early trains or spent hours inching along roads in swirling darkness to get home the night before.
The New Yorkers and Bostonians who normally swarm Cape Cod in fishing hats or bikinis in July and August wouldn’t recognize it this week. A blizzard warning through Wednesday afternoon kept business brisk at Aubuchon Hardware in Sandwich, where salt and snow shovels were popular.
“The flow of customers is pretty steady, but everyone waits until the worst of the storm to start worrying,” manager Jeff Butland said.
Boston and Philadelphia officials ordered schools closed Wednesday, but in New York City, the nation’s largest public school system remained open. Schools also were closed in Rhode Island, Connecticut, upstate New York, New Jersey, Delaware, Maryland, northern Virginia and the District of Columbia. Federal workers in Washington who got a snow day Tuesday were getting a two-hour delay on Wednesday.
About 3,000 commercial flights were canceled Tuesday into and out of some of the nation’s busiest airports, including in Washington, Baltimore, Philadelphia, New York and Boston, where Logan Airport advised passengers to expect extremely limited domestic service at least through Wednesday morning. About 1,400 flights were canceled nationwide Wednesday, according to according to flight-tracking site flightaware.com.
Melody Martinez, 23, who was heading home to Miami after visiting her mother in New York, went to LaGuardia Airport, hoping to catch her 9:10 a.m. flight Wednesday, which was canceled. She initially was told she couldn’t get another flight until Thursday.
“I thought, ‘Oh, no!”’ said Martinez. “I have to go back to work tomorrow.”
Martinez, who works in retail and attends Florida International University, eventually lucked out.
“Thank God I was able to get on a flight today,” she said. She’d have to hang around the airport until 3 p.m., but she was still “very relieved.”
Amtrak told passengers on its busiest line, the Northeast Corridor between Washington and Boston, to expect fewer trains. Lines serving Harrisburg, Pa., and Albany, N.Y., also were slowed.
The storm put a damper on New Jersey Gov. Chris Christie’s inauguration, forcing the cancellation of a Tuesday evening gala on Ellis Island. In Massachusetts, Gov. Deval Patrick postponed his annual State of the State address, saying he was worried about guests trying to get to the statehouse.
On I-95, one of the nation’s busiest highways, traffic was bumper to bumper Tuesday evening north of New York City, where some people simply gave up and tried to navigate side streets, creating another traffic jam in suburban New Rochelle.
“I just want to get to the Bronx,” Peter Neuwens said. “It’s a big place. Why can’t I get there?”
The storm was a conventional one that developed off the coast and moved its way up the Eastern Seaboard, pulling in cold air from the Arctic. Unlike the epic freeze of two weeks ago, it was not caused by a kink in the polar vortex, the winds that circulate around the North Pole.
Nonetheless, bone-chilling temperatures settled in across the Northeast on Wednesday. Temperatures were in the single digits in many places and not expected to rise out of the teens.
The newest wave of cold air helped to deplete fuel supplies and send prices for propane and natural gas to record highs. Higher natural gas prices also are leading to sharply higher wholesale electricity prices as power utilities snap up gas at almost any price to run power plants to meet higher-than-normal winter demand.
Propane users will get pinched the most. Those who find themselves suddenly needing to fill their tanks could be paying $100 to $200 more per fill-up than a month ago. Homeowners who use natural gas and electricity will see higher heating bills because they’ll use more fuel. But prices won’t rise dramatically because utilities buy only a small portion of the fuel at the elevated prices.
The storm was blamed for at least one death in Maryland, after a car fishtailed into the path of a tractor-trailer on a snow-covered road about 50 miles northwest of Baltimore and the car’s driver was ejected. Police said the storm might have claimed more lives: A preliminary investigation showed wet conditions played a role in a two-vehicle crash that killed two people in Prince George’s County, Md., and a tractor-trailer that jackknifed on Interstate 81 in Frederick County, Va., ran off the highway and hit a tree, killing the driver.