Protesters call on Rowan County to euthanize animals by injection 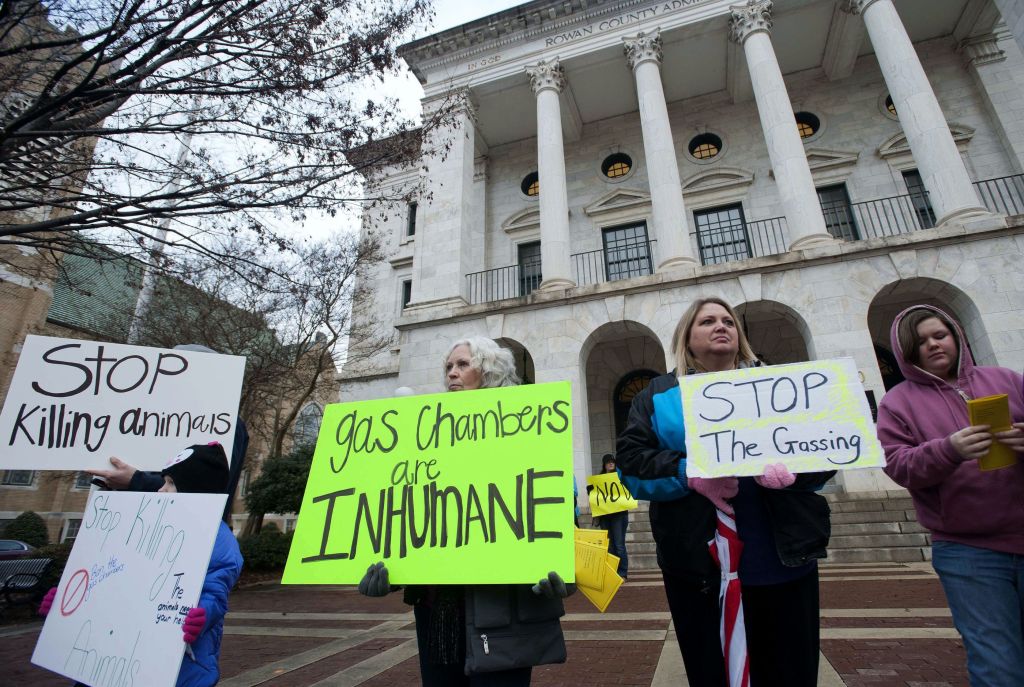 SALISBURY — About 30 people braved a chilling rain Monday to rally against the continued gassing of animals at the Rowan County Animal Shelter.

With signs around their necks, a couple of dogs also were among the protesters.

“I don’t understand the logic behind continuing with the chamber,” said Lexington resident Michelle Tonn, who held her dog Chloe, an animal adopted from the Rowan County Animal Shelter in July.

It included a mix of adults, children and animals, and many of the protesters were from counties outside of Rowan. A similar rally is scheduled in Randolph County from 4-7 p.m. Feb. 3.

An on-line petition, accessible through change.org, had 12,146 signatures through Monday calling for Rowan to quit the gassing of animals.

Rowan County is among 10 counties left in North Carolina which euthanize cats and dogs using carbon monoxide introduced into a chamber.

Other counties euthanize by injection, “EBI, for short.

According to animal advocates, the other nine counties still using a gas chamber at their shelters include Davidson, Randolph, Union, Cleveland, Wilkes, Martin, Beaufort, Wilson and Granville.

In the past, Rowan County commissioners have cited the safety of Animal Control officers as a reason to stick with the gassing over EBI.

But animal advocates argue EBI is cheaper by about half, much more humane to the dogs and cats and as safe for workers.

“The money is not the issue,” emphasized Laura Ashby, who belongs to the Fix Rowan Advocacy Group.

“Yeah, it’s something else,” said Kayli Stanton, one of the rally organizers from Kernersville.

Citing an American Human Society study from 2009, Randy Orloff, president of Project Pets of Greensboro, said the cost of EBI is $2.29 per animal vs. $4.95 for gassing.

The Humane Society also has offered any county still gassing, including Rowan, $7,000 to $10,000 grants toward training their animal control officers in lethal injection.

Orloff said the number of counties which gas animals has declined by about a third, from 33 to 10, in the past eight years. He has established a Facebook page called, “We Will End Gassing in North Carolina,” which has 2,286 members.

Monday’s protest was the second rally animal advocates have staged against gassing in Rowan County.

During a public comment portion of the commissioners’ meeting, Orloff said he would tell commissioners it wasn’t an us-vs.-them situation.

Rather, it was making people aware of how inhumane the gassing is to the animals and how taxpayers are spending twice the amount of money to gas over EBI, Orloff said.

Animal advocates contend the carbon monoxide is often a slow, painful torture and that animals fight each other in the chamber to get out.

The gassing method is dangerous and barbaric and is the kind of round-them-up animal control practiced 180 years ago, Orloff said.

“The animal shelters are backward,” he added. “… It’s time to move into the 21st century.”

Orloff claimed the corpses of gassed cats from the Rowan County Animal Shelter are sent legally to a research lab in Long Island, N.Y., for a price.

In effect, the shelter is being paid to kill cats and not adopt them out, he said. Even with that, the New York lab prefers cats killed through EBI, Orloff said.

“I figure I do my best work out here,” Michelle Lipe of Kannapolis said at Monday’s rally.

She spoke against the Rowan shelter’s policy of not allowing volunteers, and Lipe supports a no-kill policy overall.

“I don’t understand why Rowan County doesn’t want to do that,” she said, adding that every animal can be loved — “it just takes time like everything else.”

Handing out brochures, Stanton said most taxpayers don’t know they are paying for the gassing or how barbaric this kind of euthanasia is.

“They’re going to have to change eventually,” she said. “We just want it sooner than later.”

Melissa Lockhart and Kimberly Gutierrez, both from Guilford County, described themselves as soldiers for the case against gassing. Lockhart was holding her snoodle, Lilly.

Gutierrez said the worst job she ever had was working for animal control in Chatham County when the county was still gassing animals.

“They suffer in there,” Gutierrez said. “That’s why I got out of it.”

The women were a little bit disappointed with Monday’s turnout, because 240 people had indicated on social media sites that they would be attending.

Gutierrez said they expect to be going to many more rallies against gassing in the future.