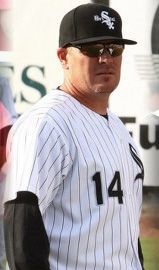 KANNAPOLIS — Pete Rose Jr., son of the 17-time National League All-Star and baseball’s all-time hits leader of the same name, has been named the 10th manager of the Class A Kannapolis Intimidators, the Chicago White Sox announced.
Rose, who has spent the last three seasons managing at the Advanced Rookie level, will be joined by hitting coach Robert Sasser and pitching coach Jose Bautista as the field staff for the Intimidators, which begin their 14th season as a White Sox affiliate April 3.
Rose, 44, managed the Great Falls Voyagers to a 48-28 and a Second Half Division Championship record in the Pioneer League last season. All three of his seasons with the White Sox organization have been as manager, including a combined 43-90 record with the Bristol White Sox from 2011-2012.
Before joining the White Sox, Rose began his coaching career in 2010 as the hitting coach for Florence in the independent Frontier League.
As a player, he appeared in 11 games with the Cincinnati Reds in 1997 and played for 14 seasons in the minor leagues with the Baltimore, White Sox, Cleveland, Cincinnati and Pittsburgh organizations from 1989-2002. His father, Pete, played 24 seasons in the Major Leagues with Cincinnati, Philadelphia and Montreal, collecting a record 4,256 hits.
Bautista, 49, returns for his fourth season as the Intimidators pitching coach and his seventh in the White Sox organization.
While in Kannapolis, he has helped develop prospects Addison Reed, Erik Johnson and Daniel Webb, all of whom made their MLB debuts within a season of working with Bautista.
Last season, starting pitchers posted a 2.81 ERA during the second half of the season under Bautista. In total, his rotation made 53 quality starts in 2013, including a string of nine straight in July. He served as the Sox’ Latin Roving Instructor from 2009-10 before joining Kannapolis in 2011. In 312 major league appearances (49 starts), Bautista went 32-42 with a 4.62 ERA with Baltimore, the Cubs, San Francisco, Detroit and St. Louis from 1988 to 1997.
Sasser, 39, spent the 2012 season as the hitting coach for Kannapolis before serving in the sale role for Class A-Advanced Winston-Salem last season. This will be his second season with the Intimidators and ninth in the White Sox organization.
A 13-year veteran of minor league baseball, Sasser began his coaching career as the hitting coach of Double-A Birmingham in 2006. He also served as hitting coach for Great Falls in 2007 and 2011 and for Winston-Salem from 2008-2010. In his lone major league game, Sasser appeared as a pinch-hitter for Texas against the White Sox on July 31, 1998.
The Intimidators field staff also includes James Kruk as athletic trainer and George Timke will serve as the team’s conditioning coach. Kruk, 30, will begin his sixth season with the White Sox and first with Kannapolis. The Coastal Carolina graduate spent last year in Bristol and working in Great Falls from 2009-2012. Timke, 32, worked as the conditioning coach for Great Falls in 2013, his first season in the White Sox organization. He previously worked as a strength coach in the Kansas City organization from 2009-12.
The Kannapolis Intimidators are preparing for the team’s 20th season of professional baseball in our community and 14th as a White Sox affiliate. Opening Day of the 2014 campaign is on Thursday, April 3, against the Greenville Drive (Boston Red Sox).
The Intimidators play at CMC-NorthEast Stadium, located off I-85 at exit 63. Season tickets and mini-plans are currently on sale by calling the F&M Bank Box Office at (704) 932-3267. For ticket and promotional information, visit IntimidatorsBaseball.com.

MLK Day speaker encourages all adults, not only teachers,…