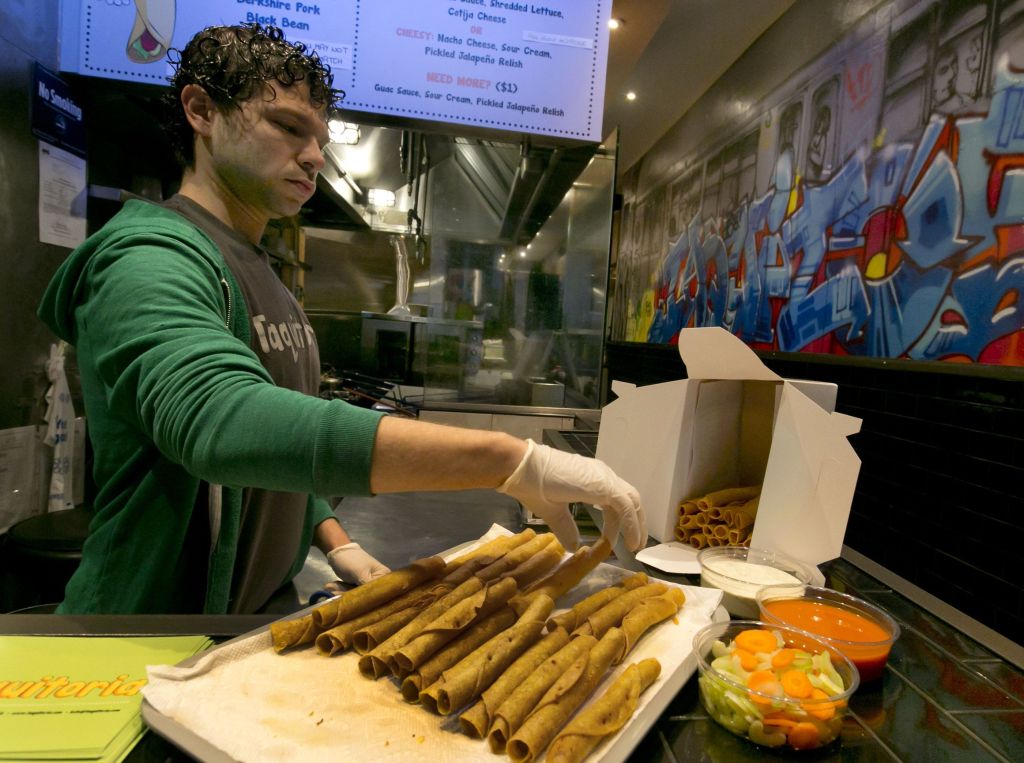 The Super Bowl won’t touch down in New Jersey until next month, but the New York restaurant scene already is rolling out the turf carpet.
The city with the endless appetite for great food is going all out for the big game, mounting a culinary spectacle in keeping with the over-the-top nature of the event.
“We go crazy for things,” says Kate Krader, Food and Wine magazine’s restaurant editor and a lifelong New Yorker. “But I’m kind of astonished at the level of things people are doing.”
Exhibit A — The 50 Yard Lounge. At the intersection of Madison Square Garden and Penn Station, the 50 Yard Lounge will offer what amounts to a five-day food and wine festival with athletes. Heated roof decks, tented plazas and restaurants will showcase themed menus from top New York chefs while current and former NFL players mingle with diners.
In some of the many chef-and-athlete demonstrations, Michelin-starred chef Michael White will teach Football Hall of Famer Cris Carter to make pasta. And celebrity butcher Pat LaFrieda will show three-time Super Bowl champion Matt Light how to break down meat.
“It’s about New York City chefs, New York City music, and about experiencing the Super Bowl in New York City,” says Lonny Sweet, founder of marketing agency The Connect Group and creator of the event. “I felt I had an opportunity to show what makes this city so great.”
Super Bowl XLVIII also will give rise to Forty Ate, a pop-up steakhouse created by hospitality giant Danny Meyer where VIP tables will cost $50,000 — food and drink included.
Commissioned from Meyer by the National Football League and hosted in the Renaissance New York Times Square Hotel, the restaurant will serve burgers, steak and pasta with a view of “Super Bowl Boulevard,” which is a section of Broadway converted into a street fair featuring a giant toboggan run.
A more modest offering will be found in Brooklyn, where the charity Taste of the NFL will hold its annual fundraiser to combat hunger. The event, which costs $700 per ticket, will bring former players as well as chefs including Tertulia’s Seamus Mullen and “Cake Boss” Buddy Valastro to the Brooklyn Cruise Terminal.
Meanwhile, all across the city, independent restaurants from the famous to the obscure are getting in on the game. A.G. Kitchen on the Upper West Side will enlarge its famous Cubano, stretching the roast pork-ham-and-cheese sub to 6 feet long.
“It gets away from the Italian subs people are used to,” says restaurant co-owner Spencer Rothschild. “All of New York is being transformed. Every restaurant should find a way to step up.”
The Asian-accented barbecue joint Fatty ‘Cue is offering feasts of whole pig, brisket or lamb to eat at its two restaurants or for take-out. And Taquitoria, a Lower East Side shop that serves only the deep-fried, cigar-like tortillas called taquitos, offers 40-piece boxes of Buffalo chicken taquitos throughout football season. On game day, says owner and manager Brad Holtzman, they expect to do 99 percent of their business for takeout.
“They’re the perfect food to sit on your couch and watch the game,” he says.
Across the bridge in Brooklyn, the chicken-and-waffle restaurant Sweet Chick will create special combinations to let diners vote with their mouths — salmon cakes might perch on a coffee waffle for Seattle.
As for Denver, where recreational marijuana was recently legalized, hemp will definitely be in the waffle. “I wish we could do a pot waffle, but we don’t want to get closed down,” Seymour says.
Even uber-hip Roberta’s, a vanguard of cool in the Bushwick section of Brooklyn, is mounting a Tiki bar with football-shaped calzones, cheese pretzels and “cheap pitchers.”
“To me that shows just how deep the food scene in this city is buying into the Super Bowl,” Krader says.