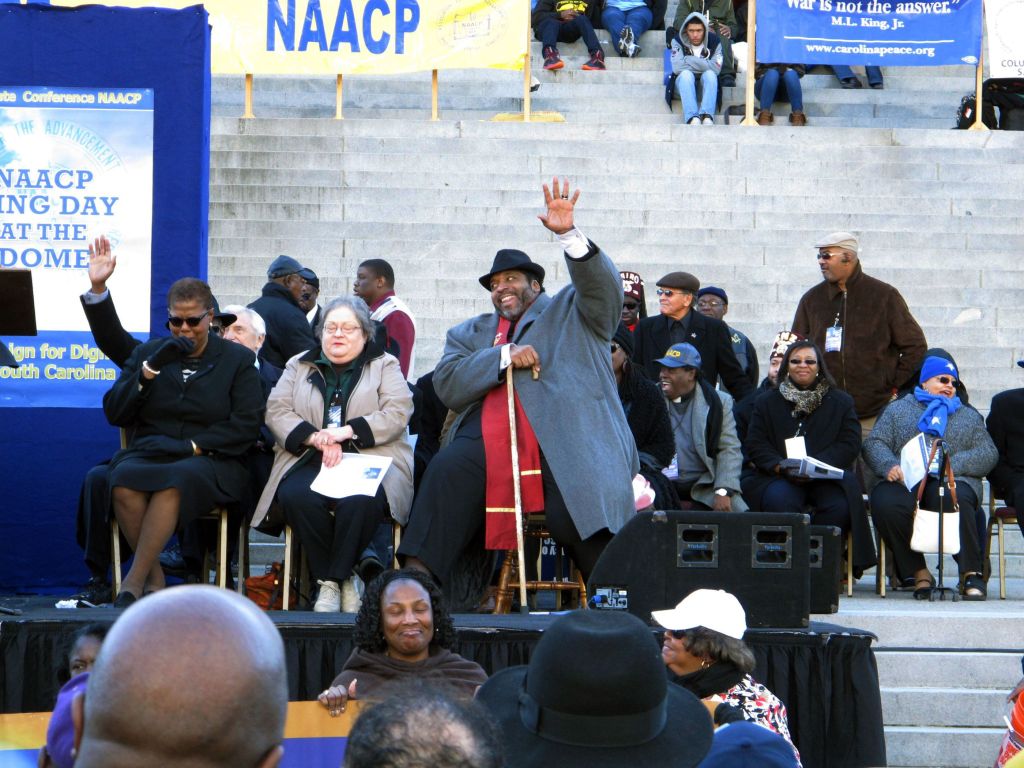 COLUMBIA, S.C. (AP) — What conservative leaders have done to social justice in North Carolina and South Carolina has been mighty low, North Carolina NAACP President William Barber said, but he thinks people in both states are ready to go to higher ground.
Barber spoke Monday at the South Carolina NAACP’s annual rally to honor Martin Luther King Jr. at the Statehouse in Columbia. He left the few thousand at the rally cheering and rocking like they were at a gospel revival, chanting “mighty low” and “higher ground” back to him.
Barber went over a list of ways that Republican leaders in Congress and Southern governor’s offices have treated most Americans badly, from leaving the Confederate flag to fly on the grounds of the South Carolina Statehouse to refusing federal money to expand Medicaid and allowing poor schools to fall further behind.
“They should have left us alone,” Barber said. “Since they messed with us, come and go with me. Come and stand with me. We’re on our way to higher ground.”
What wasn’t in Barber’s speech Monday was a call for mass protests, like the ones he has led in North Carolina. The Moral Monday protests prompted by the Republican takeover of the governor’s mansion and Legislature in North Carolina last year led to the arrests of more than 900 protesters and national attention on North Carolina’s hard turn to the right.
Barber plans to start another around of protests in 2014 by organizing a march on Feb. 8 in Raleigh, N.C., that organizers said will be the largest, most diverse mass protest in a Southern state since the 1965 march from Selma to Montgomery in Alabama.
The last time South Carolina saw protests like that was in 2000, when the first King Day at the Dome rally was held in South Carolina. Tens of thousands of people came to the capitol that year to call for the Confederate flag to be removed from atop the Statehouse dome. It would be moved to a pole beside a monument to Confederate soldiers on the capitol’s front lawn less than six months later.
The flag still flies there today, and the National Association for the Advancement of Colored People makes sure to hold the rally in its shadow to remind everyone they didn’t support the compromise and don’t like the flag anywhere in a place of honor.
The flag still gets mentioned during the rallies. The Rev. Nelson Rivers III called it a “dirty, red rag” as he urged the crowd to get out and vote and get rid of lawmakers who “claim they love the Lord, but hate the Lord’s people.”
“You ought to be sick and tired of coming up here year after year, dealing with these racist, wicked, backward folks who have been empowered by you sitting down and not going to vote,” Rivers said.
The Rev. Jimmy Gilbert asked the crowd to give money to the NAACP, telling them that they have to fight super PACs funded by rich conservative businessmen. He compared the civil rights organization to the biblical stories of David and Goliath and Jesus feeding thousands with just five loaves of bread and two fish.
“This is not the first time good folks have been put up against super powers,” Gilbert said.
Barber and other speakers also called out leaders for not respecting President Barack Obama.
“It’s mighty low for extremists in our U.S. Congress to fight the president on everything — to hate him so bad they would take this nation down trying to bring him down,” Barber said. “Somebody ought to tell them, you might as well get over it. You lied on him, you spent money trying to stop him, but you still have to call him Mr. President.”
Barber is a minister from Greenleaf Christian Church in Goldsboro, N.C. He wore his red stole during his speech, which was peppered as they usually are with religious references and calls for people to have their actions judged by a higher power.
“There is a God who sits high and looks mighty low,” Barber said. “And I hear him say it’s time to go to higher ground.”