MLK Day speaker encourages all adults, not only teachers, to educate youth 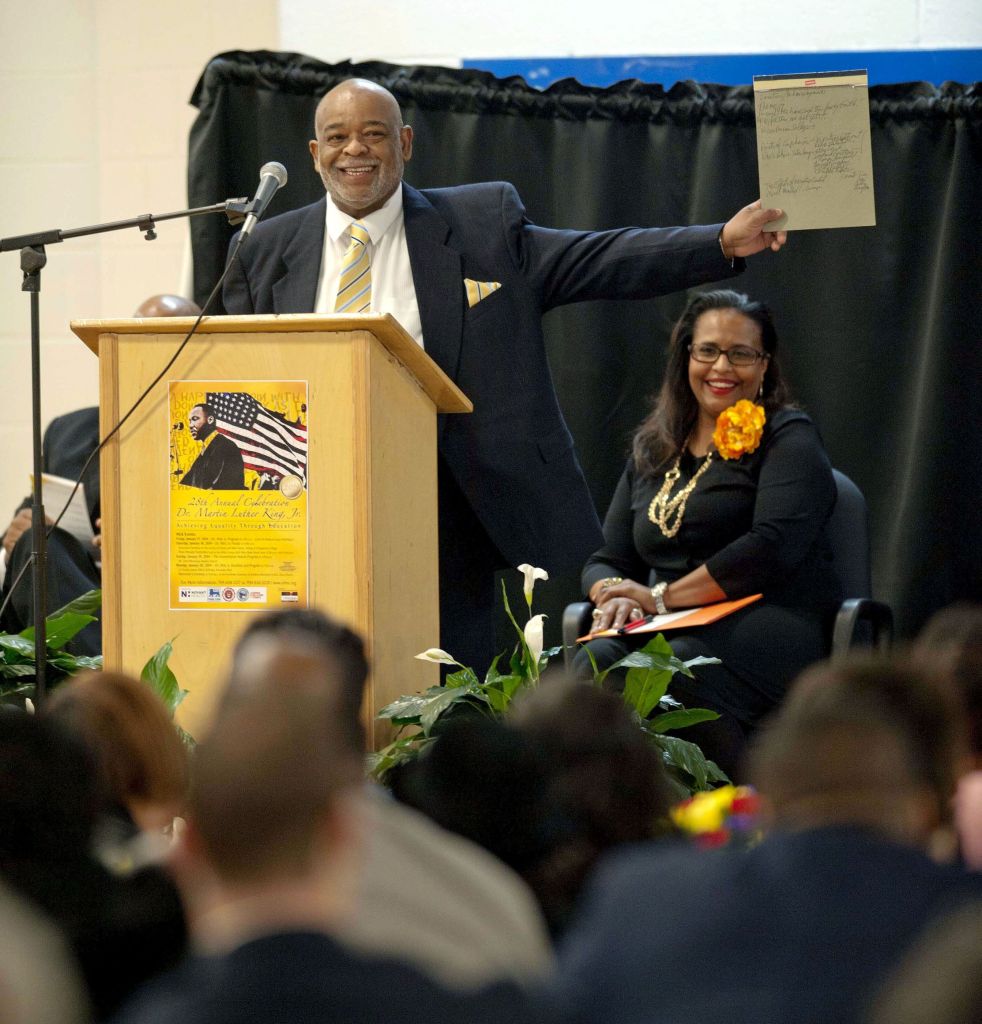 SALISBURY — Calling on everyone, not just educators, to prepare children for the future, Wilson Cherry brought people at the annual Dr. Martin Luther King Jr. Day breakfast to their feet with a speech that combined common sense and inspiration.

The theme for the city’s four-day King celebration, which included a parade, memorial service and awards program, was “Achieving Equality Through Education.”

Cherry, who is the special projects coordinator for Rowan Vocational Opportunities, encouraged parents to build a solid foundation for their children at home while teaching them to set goals and then strive to achieve them.

“Roots and wings,” he said. “That’s all we can give our children.”

Speaking at the Hurley Family YMCA during the breakfast sponsored by the Salisbury-Rowan Human Relations Council, Cherry did not leave the responsibility for children’s success solely in adult hands. He had a message for young people themselves.

Dreadlocks and beards are one thing, Cherry said to young men.

“But where are you going to get a job with 9,000 tattoos and your pants sagging?”

Cherry encouraged young women, as they think about their future, to remind themselves, “No boy or no sweet talking young rascal is going to get me in a compromising position.”

Rather than professional athletes, choose heroes who are people in the community breaking barriers and making a difference, said Cherry, who serves as coordinator for cultural diversity at Rowan Vocational Opportunities. Any child who can memorize and recite song after song of rap lyrics at a young age can succeed academically, he said.

He encouraged children to stay in school, show respect and mind their manners. The more they study, learn, read and write, the easier it will become, he promised.

Reminding the audience that there are more African American men behind bars than enrolled in college, Cherry encouraged adults to mentor and support children who may not have a role model.

Cherry, a native of Salisbury and Catawba College graduate, did not shy away from politics. He urged people who live in North Carolina’s 12th Congressional District, which includes part of Rowan County, to oppose Gov. Pat McCrory’s plan to wait until November to let voters elect a successor to former U.S. Rep. Mel Watt.

“We cannot go a year without someone in Washington speaking for us,” Cherry said.

Cherry, an unaffiliated voter, said he would listen to politicians from either party.

“I want to hear what you have to say,” he said.

He praised Rowan County commission Chairman Jim Sides for emphasizing the importance of studying the Bill of Rights and said Americans need to better understand the U.S. Constitution, as well as “consumer math” that can help identify predatory lenders.

“We need to go back and teach not only our children but each other to do justice and love kindness and walk humbly with God,” said Cherry, who received the Salisbury-Rowan Human Relations Council Humanitarian Service Award for 2012-2013.

Thanking Salisbury Mayor Paul Woodson for his work, Cherry said he wants to help return Salisbury to its former glory.

“There is so much more than we have to do in this great city,” he said.

Cherry also supported Rowan County commissioners as they defend their right to pray publicly to Jesus during meetings. The American Civil Liberties Union is suing the commissioners over sectarian prayer.

Stepping away from the podium, Cherry revealed that he has lost 47 pounds in the past six months during his fight against type 2 diabetes. A member of the Livingstone College Athletic Hall of Fame, Cherry said he no longer takes medication but continues to monitor his blood sugar and blood pressure daily and thanks God for the “discipline, desire and determination” to live a healthier lifestyle.

“Black men, go to the doctor,” Cherry said. “Get yourself checked out.”

Type 2 diabetes, which good nutrition and exercise can help control, has reached epidemic proportions, especially in the African American community.

Free blood screenings, which normally cost $100, will take place from 10 a.m. to 2 p.m. Friday at the Salisbury YMCA and several other locations across Novant’s network.

During remarks on behalf of Delhaize, executive Dave Pylipow recounted the story of the Greensboro Four and memorialized Franklin McCain, who died Jan. 9. Five decades ago, McCain and three fellow African-American college students made history by sitting at a Woolworth’s lunch counter in Greensboro.

“They shoved history forward by refusing to budge,” Pylipow said.

McCain used to tell the story about an elderly white woman who left the lunch counter when the Greensboro Four arrived, placing her hand on his shoulder. McCain said he expected “an earful,” Pylipow said, but instead the woman praised the young men and encouraged them.

While McCain taught the nation a lesson about equality and bravery, he learned a lesson himself that day, Pylipow said.

“It truly does not matter the source of your education,” he said.

Whether classroom or lunch counter, there is a lesson to be learned, Pylipow said, and using a complete education can help ensure equality for everyone.

The 100 Men in Black choir, Liz Hood of Barber Scotia College, the Dazzling Emeralds of North Rowan High School and Quentin Bethea of Livingstone College performed during the celebration. Two members of the Salisbury-Rowan Human Relations Council — Dr. Seth Labovitz and the Rev. Carolyn Bratton — delivered the invocation and benediction.

After the breakfast, a small group gathered for prayer, song and scripture at the Freedman Cemetery near Soldiers Memorial AME Zion Church for a memorial service led by Dr. Grant Harrison.

Yesterday: In April 1968, Salisbury mourns the death of…