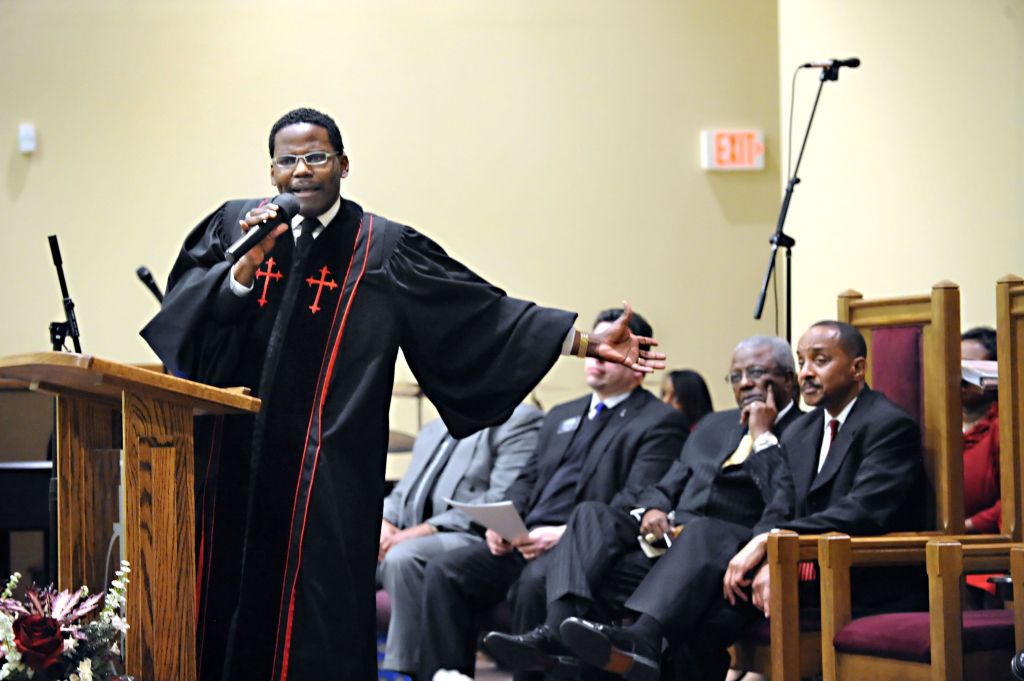 The purpose of the celebration is to recognize the occasion of King’s birthday and to honor scholarship recipients and honor “members of the community who’ve made outstanding accomplishments,” said Levonia Corry, chair of the humanitarian awards and scholarship program.

In addition to the awards presentations, the service included prayers, a responsive reading, a performance from the church’s creative expression ministry, music from North Rowan Connection’s 100 Women in Red and a message from Rev. Derwin L. Montgomery.

“Locally they recognize people who have contributed to our community,” she added.

Montgomery’s message centered around the theme “my soul goes back.”

In it, Montgomery looked at the “struggle since the beginning of time” for equality for all people.

Despite the Civil War ending and the 19th Amendment’s passage, “still people were being oppressed,” he said.

Montgomery encouraged listeners to examine King’s life and follow in his footsteps.

The only reason anything is different is because someone struggled to make it happen.

He said people should take a stand for equality and freedom even if they feel alone, knowing that they aren’t and they have the support of all those who went before them.

“The fight for equality does not rest on any individual man, but the fight for equality is rested and rooted in God himself,” he said. “For when we understand who we are and whose we are, no matter how far we look back through time, we would see that the struggle has pushed us and propelled us through so many things they said we would not overcome.”

Montgomery was born and raised in South Carolina. He went to Winston-Salem State University, where he majored in political science with a concentration in public administration and minored in mass communications. He received his degree in 2010.

While at Winston-Salem State University, Montgomery was the president of the university’s NAACP chapter for two years.

Montgomery has been preaching since he was 16.

The Humanitarian Awards are awarded because of each individual’s commitment to community activities and their outstanding achievements, Corry said.

The first recipient was Nathan Currie. He is an assistant superintendent for Rowan-Salisbury Schools and is the first African American to hold such a position in the county. Currie has had a significant impact on the school system for many years. He is also involved in a wide variety of other community organizations. He is on the Rowan County YMCA Board of Directors, Vice Secretary of the Rowan-Salisbury branch of the NAACP and involved in Rowan County’s United Way Allocations, among other community involvement.

Gary B. Hall has been a member of the American Legion for 24 years on the local and state level. He is a U.S. Army veteran and served in Dessert Storm, winning awards for bravery and service. He has served as the Vice Post Commander at J.C. Price American Legion Post No. 107 and is currently a tee ball coach, involved in the Central Children’s Home and is chairman of the security committee at the Post.

Rowan Concerned Citizens, a non-partisan group that seeks to encourage fellow citizens to participate in civic activities, won the final award. The group focuses a large amount of time and effort on mobilizing Rowan County community to vote.

The scholarships are in honor of Dr. S.R. Johnson and Dr. Eva Johnson, the former pastor of Mt. Zion Missionary Baptist Church and his wife. Students must be enrolled in college and submit an application to be considered.