A snow path and the ‘holy road’ 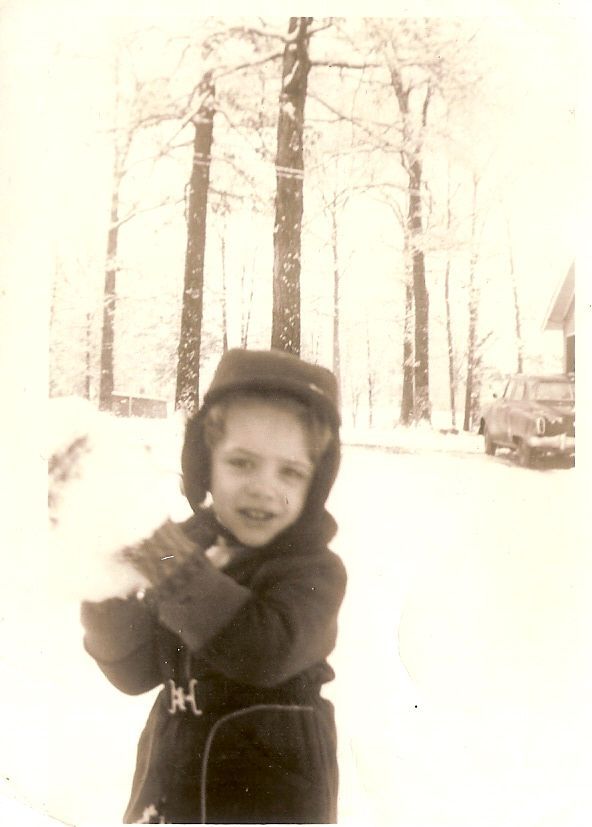 Although I have seen only a few snow flurries this winter, the recent, extreme record-breaking cold (half of the equation for snow) made me think back to one cold, clear, early afternoon in 1960 following a day of falling snow and some sleet.
(As a parenthetical aside and diversion of paragraphic length, but more weight, when I heard that the other day was the coldest since the mid-1980s, it brought back another, less pleasant memory. It was 1985, and I was a social worker then at the Caswell County Department of Social Services in Yanceyville, when a 12 year-old boy in my case load picked the eve of the coldest day since the keeping of records for that area to run away from home. Thankfully, he was found alive and shivering the next morning [instead of lifeless and still] after a combined search by dedicated emergency personnel, firefighters and first responders. When discovered, he was taking refuge among bags of garbage which had been piled in someone’s carport prior to transport to the county landfill. I don’t know for certain, but if some of those bags contained decaying organic matter, such as table scraps, then there would have been some heat produced as a by-product of decay. Some methods of extracting methane gas from the decomposition going on in landfills have actually been developed.)
I generally try to keep things in order when writing, but sometimes, consciousness doesn’t just “stream” along a linear path in the space-time continuum, but instead takes detours now and then.
Now back to that much more pleasant memory from a quarter of a century before 1985.
On the day after one of those March 1960 snows, my brother Joe and I, along with several other friends, decided to go for a long, winter’s day walk. I seem to remember Wayne Cline, Steve Ritchie and possibly Roy Hopkins going along, but also have a most definite memory (as befits a little brother) of Joe being there.
The snow was so deep that the surest plan for walking consisted not of crafting our own path, but in taking advantage of those long established, then paved, which had received some scraping by the highway department.
Despite that repeated scraping, the accumulation was so much that our shoes didn’t really touch asphalt that day, remaining about three inches above it on compacted snow and sleet.
As needs must, we began our walk by heading south on the Old Concord Road, then turned left on the Heilig Road, traversing it for a good distance. This was also the first part of the route which I regularly traveled via school bus to Granite Quarry School during nine months of the year.
In German, the word “heilig” means “holy,” but I never knew that until my first year of German at Appalachian. Growing up, “Heilig” was just another word, a name in fact, along with others such as Bost, Cline, Fisher, Misenheimer, Ritchie, etc. (Teutonic names all). Mrs. Sadie Heilig, our landlady, married Paul Ritchie’s brother Holly, in effect exchanging one German surname for another. (Such occurrence always “laws-of-chance favored,” especially in southeastern Rowan.)
In my recollection of our winter’s day walk on the Heilig Road, the brightness of the sunshine and snow stand out in memory, just as when that scene was “live.” It was as if the ground in our area of the world were suddenly as bright as the topmost layer of clouds on the planet Venus.
The vast majority of my visual memory of that frozen foray consists of snow-reflected light, so bright that my eyes could have benefited from sunglasses, but as I didn’t have a pair, they didn’t.
Being the shortest person on the walk, I was in prime position to have noted everything occurring at ground level, but can’t recall seeing even one of our shadows being cast. Perhaps the brilliance of both sun and snow were too much for that innate “darkness” in everyone and everything to even register there, or perhaps my vision was suffering from a sensory overload of the brightest white. Maybe our shadows became mysteriously “bleached” and camouflaged, and that despite their being in motion, the lack of contrast caused them to be indistinguishable from the fallen, static snow.
Not very long afterward, both the footprints and snow path melted onto the pavement below, and as is the way of the water cycle, evaporated into the sky above.
Although our frozen winter trail lasted only briefly, certain asphalt “memorials” still mark the route which we walked. One is named the “Old Concord Road,” and the other, the “Holy” Road.