‘With a shout of joy’ 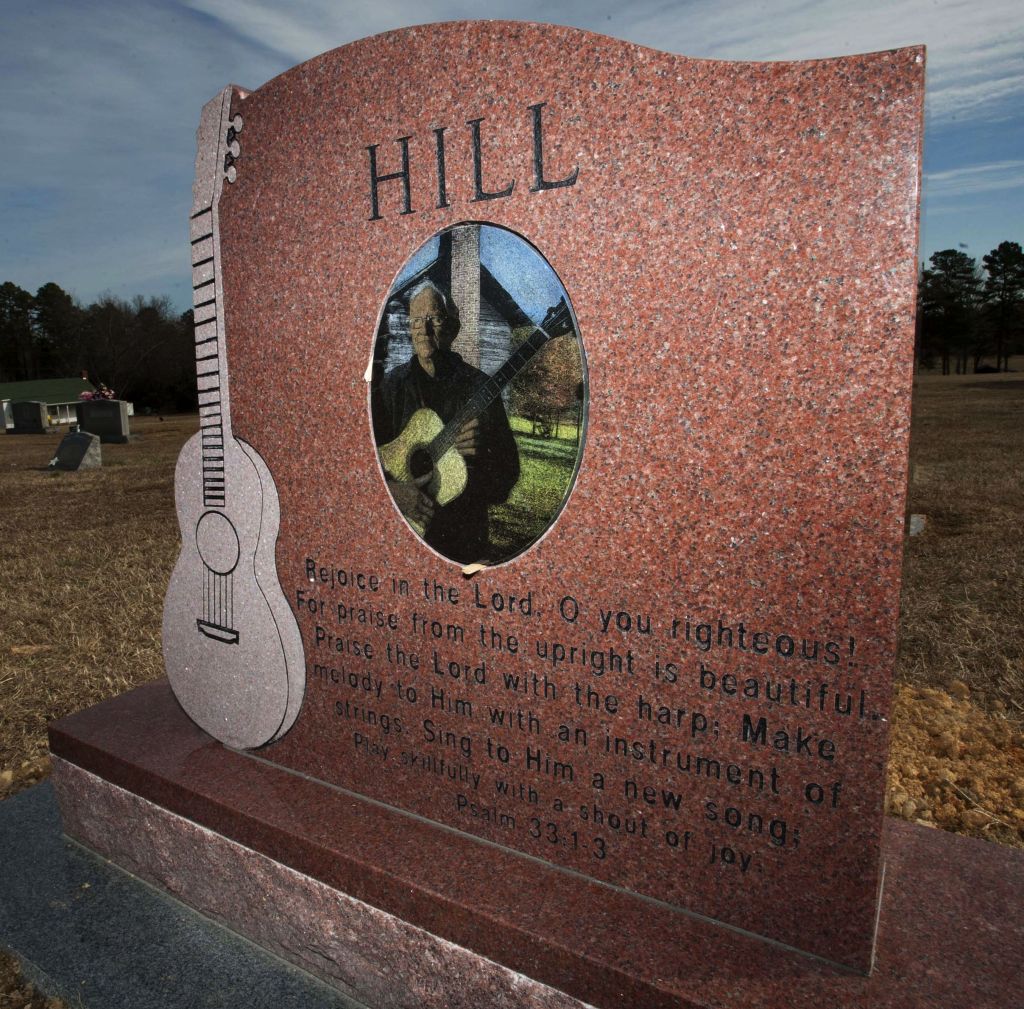 GOLD HILL — Her “Hilly” was a humble man, but Lena Hill thinks her late husband, Paul, would like the monument at his grave site.
“I tried so hard to get something befitting the man, because he was so special,” Lena said Friday.
Last week, Rowan Monuments installed Hill’s tombstone in the cemetery of Liberty United Methodist Church, where he was a faithful member and musical servant.
Carved and polished in India and shipped to the Charleston, S.C., port, the granite marker includes a guitar — prominent on the stone’s left side — and a center oval with a color portrait of Paul Hill.
Post photographer Jon Lakey took the portrait of Hill for a newspaper story on the musician a couple of years ago. Lakey was a friend of the Hills and fellow church member, and Lena Hill said she was especially happy she was able to use one of Lakey’s photographs.
The inscription, which is Psalm 33:1-3, was etched in after the stone’s arrival from India. The stone’s color is described as “India red.”
“It’s the first one I’ve ever seen like it,” said James Poe, owner of Rowan Monuments.
Poe tried his best to find a guitar design that came close to the Martin brand Hill always played and cherished.
Lena Hill said the Bible verse on the stone is one her husband was quite familiar with.
“We read that Psalm together very much,” she said.
She added her husband always mentioned how he thought tombstone messages should be joyful.
Part of the verse says, “Make melody to Him with an instrument of strings. Sing to Him a new song; Play skillfully with a shout of joy.”
Lena Hill said she received many suggestions for an inscription, but they didn’t seem quite right compared to two or three Scriptures Paul Hill had especially liked.
During a life filled with many musical diversions, Hill played guitar for groups such as Cross Crowd, Sunnyside Band, Blue Grass Ramblers, Black Mountain Boys and the Silver Bells.
He strummed behind the late U.S. Rep. Bill Hefner, when Hefner was a gospel-singing congressman. Hill also played for musical groups appearing on the Arthur Smith television show and on Jim and Tammy Faye Bakker’s PTL program.
He was a friend of Doc Watson’s and played at some of the past Merlefests in North Wilkesboro. In studio work, Hill joined many other musicians in cutting CDs together, from Nashville to his own little studio at home.
When he wasn’t collaborating, Hill won many individual playing awards, including the coveted Basco Lamar Lunsford Trophy on three different occasions at the N.C. State Fair — 1983, 1995 and 2009.
Throughout his life, Hill played at churches, rest homes, Masonic homes, revivals, festivals and fiddlers conventions. Beyond the Lunsford trophies, he was especially proud of all his ribbons, including an early first place he won at the 1963 Union Grove Fiddlers Convention.
Hill probably played for his biggest crowd in 2010 in LaCrosse, Wis., when he performed “Freight Train” at the televised National Veterans Creative Arts Festival as one of the national winners.
Hill died last April at the age of 82 after a lengthy fight with cancer.
Lena Hill said her pastor, the Rev. Charles Curtis, called her last week to praise the stone’s beauty and within minutes of his call, she heard from many other friends with similar sentiments. Curtis had posted a photograph of the marker on his Facebook page.
Poe said the monument is as pretty as Hill’s music and unique as Paul Hill was.
“I shed tears when I saw it,” Lena said.