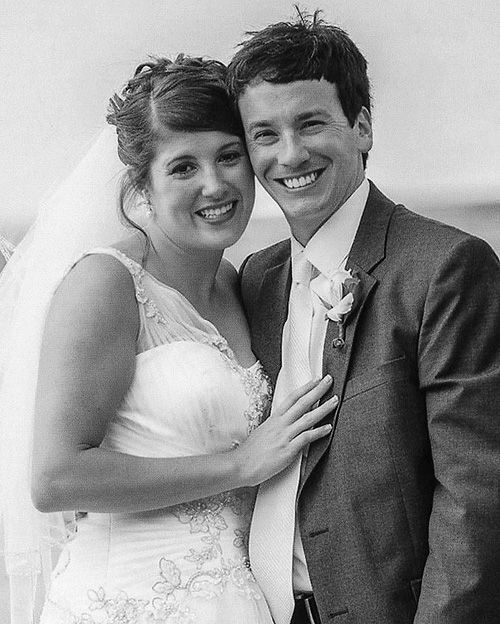 OSWEGO, N.Y. — Kristin Marie Chalifoux and David “Dee” Fletcher Hord IV were united in marriage Sept. 1, 2013, on the Shore of Lake Ontario. The groom’s uncle, the Rev. J. Luther Mauney, officiated the ceremony, which was followed by a reception at Alexandria’s.
Melissa Tighe of Oswego was the brides’s matron of honor, and bridesmaids included sister of the groom Alice Railton of Charlotte, N.C.; friends of the bride Lauren Brylinski of Chicago, Ill., Allison Rutledge of London, Ontario, and Gina Brandano of Pulaski, N.Y.; and cousins of the bride Kelsey Chalifoux, Alyssa Holland, Samantha Schuffenecker, all of Albany, N.Y., and Katie Jung of Coral Gables, Fla.
Standing as the groom’s best man was his father, David F. Hord III. Groomsmen included brother-in-law of the groom James Railton of Charlotte, N.C.; brothers of the bride Adam Hege, Christopher Chalifoux and Nicholas Chalifoux, all of Oswego; friends of the groom Ryan Hodges of Charlotte, N.C., John Wallace of Chapel Hill, N.C., and Mike Paduchowski of Durham, N.C.; and cousin of the groom Christopher Kingston of Asheboro, N.C.
Serving as ushers were cousins of the bride Jay, Patrick and Tom Holland and Corey Schuffenecker, all of Oswego.
Serving as flower girl was second cousin of the bride Quin Fitzsimmons of Victor, N.Y., and ring bearer was Grey Railton of Charlotte, N.C., nephew of the groom. Christina Mauney of Midlothian, Va., was reader.
The bride is the daughter of Debby and Scott Hege and Dan and Kris Chalifoux, all of Oswego. She is the granddaughter of Maxine and the late James “Fran” Holland of Oswego, the late Joseph and Shirley Chalifoux of Fulton, N.Y., the late Phil and Aileen Hege of Shelby, N.C., and the late Raymond and Jean Jung of Oswego. A 2002 graduate of Oswego High School, Kristin graduated from Niagara University in 2006; SUNY Oswego in 2008 with degrees in Elementary Education and Literacy Education; and is a candidate for her Doctorate of Educational Leadership at Appalachian State University in Boone, N.C. She is employed by Wake County Public Schools.
The groom is the son of David and Bonnie Hord of Salisbury, N.C., and the grandson of Mrs. Eoline Hord of Kings Mountain, N.C., the late Dr. D.F. Hord and the late S. Wayne and Alice Patterson. A 2000 graduate of South Rowan High School, Dee graduated from the University of North Carolina at Chapel Hill in 2004 with a History degree and earned his Juris Doctor from Charleston School of Law in 2007. He is an Attorney Advocate for the Wake County Guardian Ad Litem program.
Following a cruise to New England and Canada, the couple are living in Garner, N.C.

Looking back as Gay’s Chapel turns 175