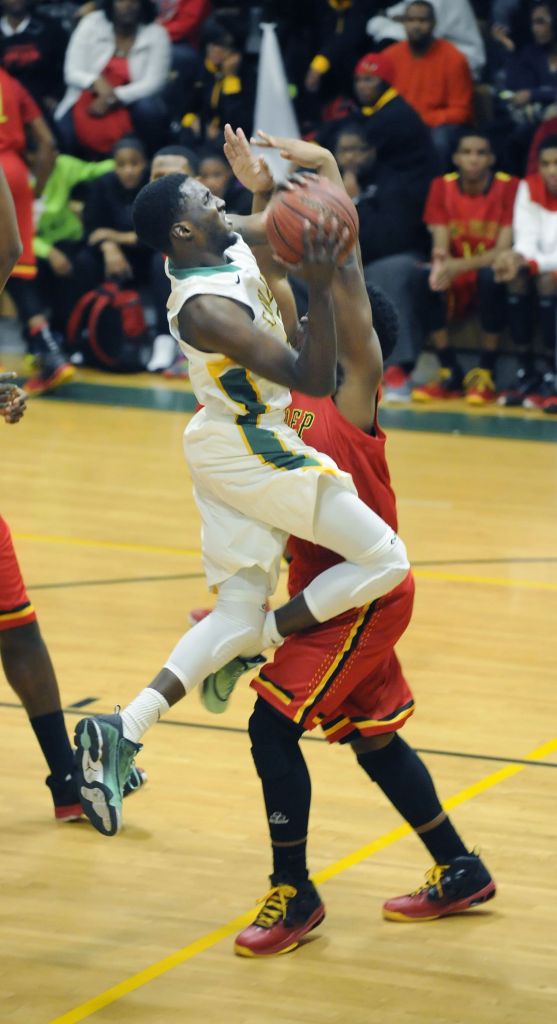 SPENCER — The growing rivalry between North Rowan and Winston-Salem Prep added another thrilling chapter Saturday night in front of a standing-room only crowd in Spencer.
The Phoenix scored the final 10 points of the game to pull out the back-and-forth 77-71 victory to complete the season-sweep between the two basketball powerhouses.
“Hard fought,” North coach Andrew Mitchell said. “We just made some mental mistakes down the stretch that beat us. We talked about those and they’re correctable things. The good thing is that we played with a lot of energy and effort. We could have quit in the second or third when they went up 10 or 12, but the guys showed a lot of guts.
“I feel good about it – it doesn’t hurt anything but our record.”
“We have developed a rivalry with North Rowan and we need to continue it,” Prep coach Andre Gould added. “I think we had a little issue down at our spot but that’s all behind us. Me and Mitchell are good friends so we want to continue it. It’s good competition for all of us.”
Already leading 34-26 at the half, Prep’s Kwa’tre Hollingsworth opened the second half with an emphatic dunk as the Phoenix pushed their advantage out to as much as 13 (41-28) in the third and looked to run away with it.
But North’s ‘Big 3’ of Jalen Sanders, Michael Connor and Michael Bowman went to work. The trio out-scored Prep 15-2 over the next three minutes to bring the Cavaliers all the way back for a 43-41 lead, forcing a timeout with 3:07 to play.
“Intensity,” Bowman, who scored 20 points on the night, keyed on. “We kept on playing and didn’t get down on ourselves. We battled back and came back.”
After the Phoenix retook the lead down the stretch, Sanders buried a trey at the buzzer to give North a 51-49 lead after three, while sending the crowd into a frenzy.
In a wild fourth quarter, the teams combined for 48 points in the as the Cavs grabbed a five-point advantage at 67-62 with 3:27 remaining on another Sanders bucket. But Prep’s Coye Simmons converted a three-point play before Mike Hughes drilled a deep 3-pointer to tie the game at 71 with 1:11 left.
The Phoenix turned up the defensive pressure in the final minute, forcing a turnover and a contested shot to pull ahead. From there, Prep sank its final six free throws to seal with hard-fought win.
“We’ve been in that situation before, even with them,” Gould said. “We knew 13 points was nothing and that they would make a run. We didn’t panic, there was no need.”
Mitchell said the team just didn’t execute down the stretch and it cost them.
“We executed our game plan in the second half to perfection and ended up taking the lead. We just didn’t play smart down the stretch.”
Despite two losses to Prep on the record, Mitchell believes the battles will prepare his squad come playoff time.
“Playing teams like this, when we get to the playoffs, it’s really nothing we haven’t seen,” he said. “It’ll help us be prepared.
“It can’t do anything but make us better. I don’t see us getting worse from this.”