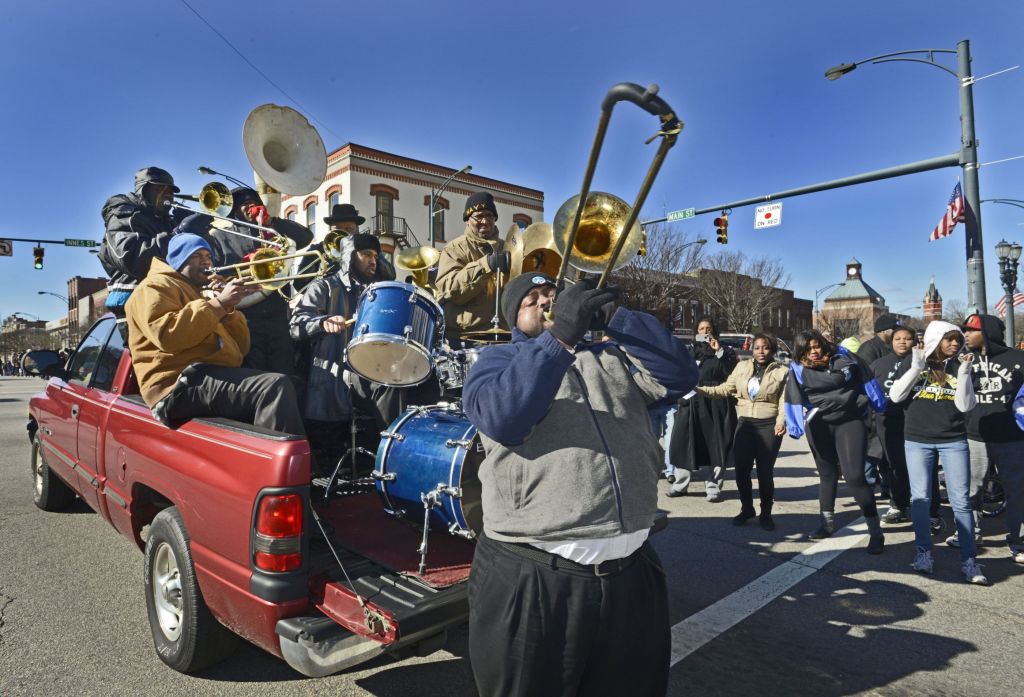 This year, Salisbury kicked off its 28th annual Martin Luther King Jr. Day celebrations early.
The parade started at 11 a.m. at the corner of Kerr and Main streets and ended at Livingstone College. It was followed by a celebration at the Miller Recreation Center.
The parade didn’t look much different from years past. Dancers danced, bands played and beauty queens waved, but one thing was very different. Instead of having the parade on Monday, which is Martin Luther King Jr. Day, parade organizers decided to make a move to Saturday this year.
“I love it,” Beatrice Jones, a Salisbury resident said, explaining that it’s hard to do everything when all the events are on one day.
Jones and her family normally come every year, she said.
“We come to honor Dr. Martin Luther King. This is just one way we come together as a community to honor him.”
Belinda Kerr said it’s an honor for Salisbury to have a parade to honor King’s birthday.
“I just wanted to be in the midst of the celebration.”
Kerr thinks the new Saturday schedule is great because it gives more people the opportunity to come since not all companies observe the holiday.
She added that this year was “the first time in about five to six years” she attended because she normally had to spend the holiday working.
“I wanted to see my friends perform,” said 10-year-old Aryonna Smith.
Smith used to be a part of Mini Funk Factory Marching Band, so she showed up to support her friends.
Downtown merchants had mixed responses to Saturday’s parade.
“We love having parades,” said Stitchin’ Post Gifts manager Sherry Lowery. “It brings people downtown.
Lowery said the store was busy before the parade, but things slowed down during and after it.
“I think I like it better on Saturday,” said Glenda Dyson, co-owner of Literary Bookpost, Just the Thing.
Dyson watched from inside her store and said, “I enjoyed the parade.”
“It was slower than our normal Saturday,” she said, adding that no one came to a children’s book reading that morning.
Tyler Wildes at Side Walk Deli said it was hard to say if the parade affected business because it was so cold.
“It’s been a little slower,” he said.
“We did sell more coffee,” Daniel Jordan, who was also working, chimed in.
Wildes said he liked it “much better” when the parade was actually on Martin Luther King Jr. Day because it brought more people into the restaurant.
Toby Hagmaier at Southern Spirit Gallery said, “Generally speaking, parades are not helpful.”
“I only had two customers. Usually Saturdays are better than that,” she said, but added, “January is generally slow anyway.”
Hagmaier said she’d “rather see it on Monday.”
Several downtown merchants mentioned that some of their regular customers were probably discouraged from shopping downtown Saturday because roads were blocked off for the parade and there was nowhere to park.
Tony Fleming organized the parade for the first time this year.
“For my first time, I think it went great,” he said.
Fleming estimates there were more than 75 entries in the parade.
When asked if the parade would be held on Saturday again next year, he said, “We don’t know yet. That’s something we need to discuss.”
The post-parade celebration included performances by dancers from North Rowan High School and Livingstone College, as well as Livingstone’s Trio Band,
“It was a good crowd,” said Veleria Levy, co-chair of the Martin Luther King Jr. committee.
She estimated that 200 to 300 people showed up.
Salisbury Mayor Paul Woodson and Mayor Pro Tem Maggie Blackwell attended the event, as well as several members of Salisbury’s city council.
“We appreciate the amount of support,” said Greg Philpott, member of the Salisbury Human Relations Council and the master of ceremonies for Saturday’s event.