Time to put divisive issues behind us 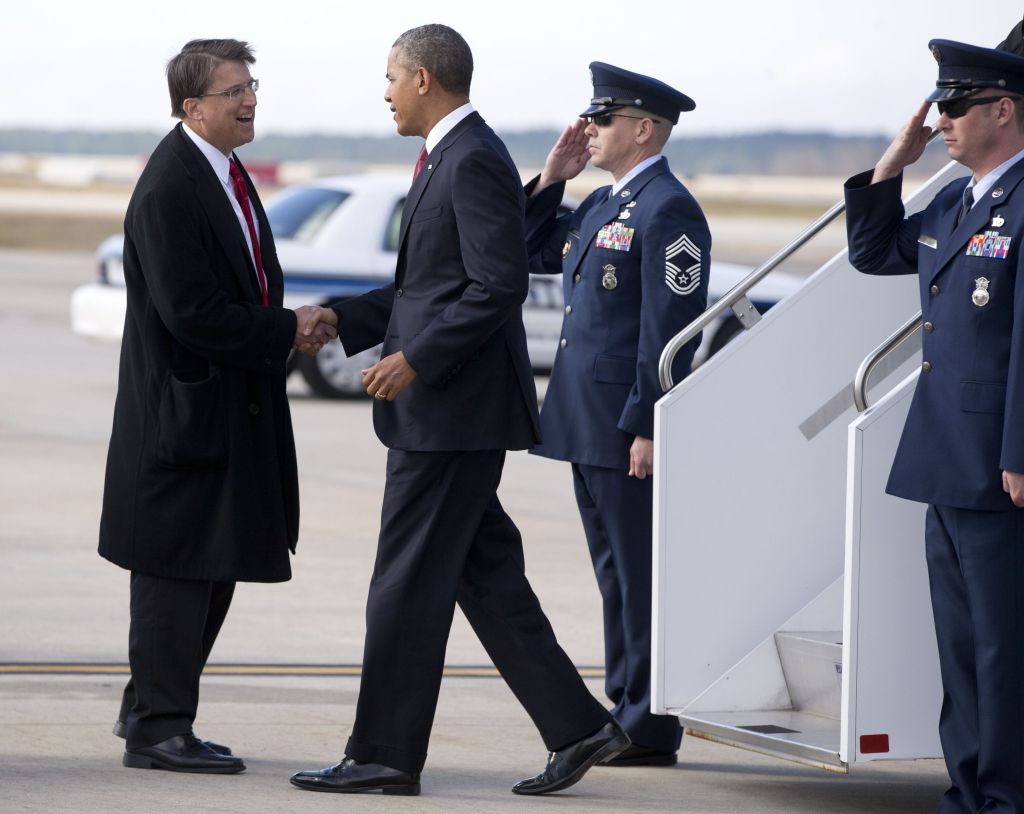 Sometimes our problems loom so large and seem so complex we can easily be disheartened or depressed about our state’s future. And once sworn-in, our elected officials are constantly sworn at, like it is some kind of sport. We’ve become a people more focused on the negatives, the problems and the failures than on our possibilities and potential. Two polar-opposite politicians reminded us this week that perhaps we need to change our perspective.
President Barack Obama and Gov. Pat McCrory come from different political parties, are of different races and have differing political philosophies, but they have a thing or two in common. Both have been more vehemently vilified than any governor or any president in modern times — Obama because he is a liberal Democrat; McCrory because he is a conservative Republican. But the picture of the two of them shaking hands at RDU airport this week was truly worth a thousand words. The message was that these two leaders could put aside their differences to work together to improve North Carolina’s economy.
McCrory, appearing on the TV show NC SPIN last week, acknowledged the many problems in our state but sounded every bit the cheerleader, touting what he is calling the “Carolina Comeback,” an improving economic climate underscored by a 2 percentage point drop in our unemployment rate over the past 12 months. Obama was in Raleigh to announce the new manufacturing innovative institute, a consortium of universities and businesses helping to research, innovate and manufacture the new generation of power electronics. Political rhetoric? Perhaps, but also a strong reminder that optimism trumps doom and gloom.
Former motivational speaker Zig Ziglar frequently said some people find fault like there’s a reward in it. We can dwell on the negative, rant about who is doing whatever we don’t like and complain about what is wrong in government, but how’s that working out for us? And how is it making things better?
We’re not for one minute suggesting that everyone has to agree with the politics or the policies of Obama, McCrory or anyone in a position of authority. Healthy constructive and civil disagreement and debate can be very productive. Neither should we ignore our many problems. They are big, sometimes seem insurmountable and won’t get fixed without being addressed.
But nobody builds monuments to critics and they don’t give the Nobel to naysayers. No team and no state or nation can succeed when members are working at cross-purposes. President Obama reminded us of all the research being done at our incredible universities, in Research Triangle Park, Centennial Campus and other labs throughout North Carolina. He pointed out innovative companies that are using that research to design new products and businesses that are employing those new products in manufacturing. We are a state with bountiful natural resources, a great climate and people eager to work.
With all our problems, North Carolina has a lot going for it and now is a time to put behind us things dividing us, focusing instead on our positive assets and working together to build a better future. Regardless of voter registration, age, sex, race or place of birth North Carolinians are all on the same team.