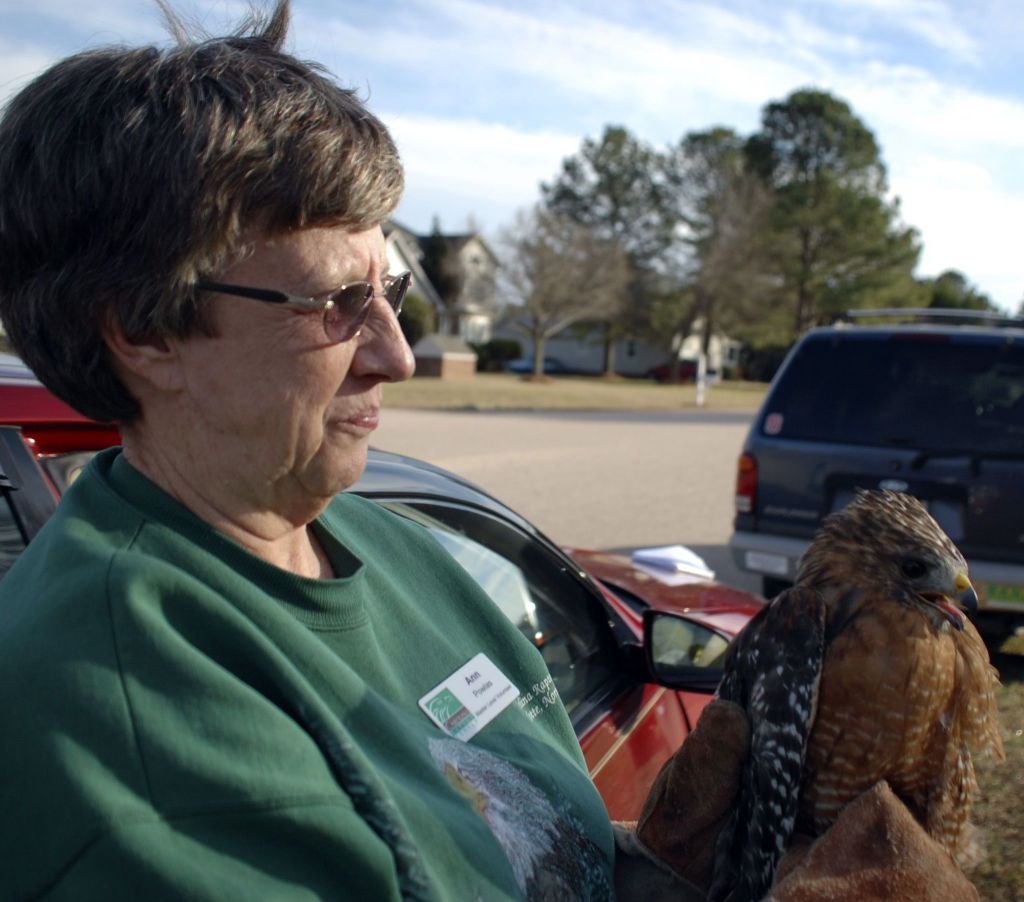 SALISBURY — Everything came up red Friday afternoon.
Ann Powlas drove a red car. Inside the red car was a red box. Inside the red box was a red-shouldered hawk.
And the hawk was seeing red.
“He is feisty,” said Powlas, who has volunteered for the Carolina Raptor Center for almost 25 years. “… He’s ready to go home.”
Powlas’ car followed the Ford Explorer of Salisbury insurance man John Leatherman down N.C. 150 Friday afternoon until they reached the entrance to the Glen Heather subdivision.
Not far from here Nov. 19, Leatherman first spied the hawk sitting quietly in a travel lane of N.C. 150. Leatherman realized something had to be wrong with the bird.
He parked his Explorer on the side of the road, and as he approached the hawk from behind, Leatherman reached to stroke the back of the bird’s neck.
The bird showed no resistance, confirming for Leatherman that he was in bad shape. “He’s stung,” Leatherman said to himself.
Wearing gloves, Leatherman picked up the hawk, placed him in the back of his Explorer and drove the injured bird to the Small Animal Medicine and Surgery location on Sherrills Ford Road.
The veterinarian’s office contacted the Raptor Center in Mecklenburg County and the center sent someone to pick up the hawk.
For the purposes of this story, the hawk is given “he” status, though the Raptor Center did not conduct a DNA analysis to determine its sex.
The Raptor Center determined the hawk was an adult bird which had suffered a fractured beak, bruised chest, closed right eye and showed difficulty breathing. He also was quite lethargic — a reason Leatherman found it so easy to handle him back in November.
Leatherman guesses the hawk was struck by car.
His hawk made a speedy recovery. Powlas, who volunteers in education and resident bird care at the Raptor Center, provided documentation that showed if the hawk had been treated privately — and not at the nonprofit Raptor Center — the costs would have amounted to $1,009.
Powlas brought the hawk back with her to Rowan County on Friday and arranged to meet with Leatherman so he could see the bird released.
Because the Raptor Center likes to see healed birds put back in the same area where they were found, Powlas and Leatherman returned to the entrance of Glen Heather.
Powlas is a veteran of these releases. She performs about 25 to 30 a year, so she has done hundreds. Years ago, her first release — a great horned owl — occurred on a beautiful moonlit night.
“I cried,” she said, and she has helped the Raptor Center ever since.
“They’re beautiful birds,” she added, noting she had picked up an injured Cooper’s hawk Thursday.
Powlas fetched the hawk from his red cardboard box, held him a moment so Leatherman could take a few photographs, then set the hawk loose in the direction of some tall pine trees.
He never looked back.
Or did he, just to thank Leatherman for his rescue?
Contact Mark Wineka at 704-797-4263.

For 2014, think perennials and edibles