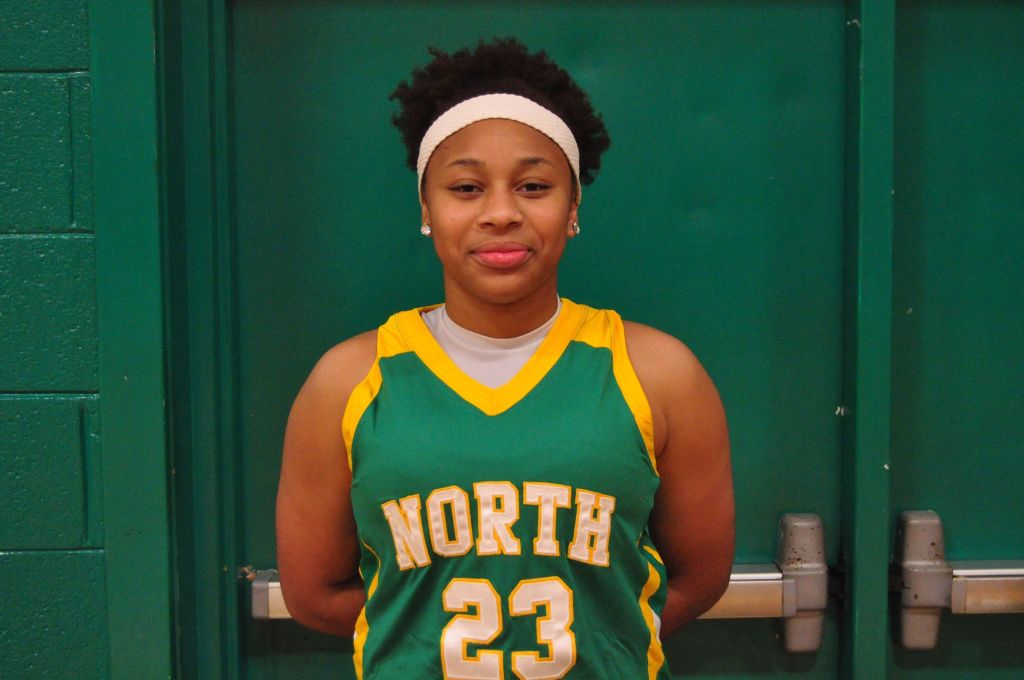 SPENCER — East Davidson senior Taylor Bell walked out of the locker room apologizing to coach Don Corry for allowing her defensive assignment to score 16 points.
“You did everything you could do,” Corry said. “That girl just had a career game — the game of her life.”
North Rowan’s Ashley Blaire did have a career game, but it wasn’t enough. East Davidson beat the Cavaliers 49-48 in a struggle for first place in the CCC that lived up to the hype.
North played without injured Brielle Blaire, a Virginia Tech signee and one of the top players in county history, but her little sister made things exciting in the North gym.
North guard Nycieko Dixon had a look at a 3-pointer in the closing seconds that would’ve pulled the game out, but she was off-target from the right corner.
“All you can ask for is for a good shot and a chance to win the game,” North coach Brian Lytton said. “And we had a person we’d want to take that shot taking it. It just didn’t go in tonight.”
Eighth-ranked East Davidson (12-2, 3-0) got 16 points and a bushel of rebounds and blocked shots from 6-foot-2 sophomore Bailey Plummer, who dominated the paint.
“Their size was their biggest weapon against us,” Lytton said. “But in the second half, we really fought hard on the boards.”
Bell scored 12 points for the Golden Eagles. Jennifer Welborn had nine, including three clutch buckets late.
Besides Blaire’s 16, the Cavaliers (10-2, 2-1) got 13 points from Dixon. Aliyah Farmer led the rebounding.
It was 13-all after a quarter, but ED dominated defensively in the second quarter and rolled to a 30-16 halftime lead. Corry lauded the job his team did against Dixon and Demeria Robinson.
“North Rowan is quick and explosive,” Corry said. “Even without Brielle, that’s a really good team, and I thought our guards (mostly Madi Hallman and Lori Morgan) did an outstanding defensive job to slow down two exceptional scorers.”
North’s only bucket in a dismal second quarter came from Fredejah Royer, who accidentally banked in a shot.
“I just kept waiting — and waiting — for someone to get hot,” Lytton said.
Someone usually gets hot for North. This time it was Ashley Blaire, who averages about 5 points per game. She scored all her points in the second half. North was down 35-18 midway through the third quarter when Blaire drilled back-to-back jumpers, one of them good for three.
Those buckets lit a fuse, and the Cavaliers, who had looked beaten, fought furiously the rest of the way.
Blaire’s 3-pointer late in the third quarter cut East’s lead to 39-31.
“As soon as I was letting the ball go, I knew it was going in tonight,” Blaire said. “Someone had to step up. I made some shots that got our momentum going, and I was proud of all my teammates for how hard they played.”
When Blaire connected again with 4:20 left, North had outscored East Davidson 20-4 in an eight-minute stretch and trailed 39-38, but with the crowd going crazy, Bell hit a huge shot, a contested 17-footer right in front of the East Davidson bench.
That swish settled things down for the visitors, and Corry’s team went back to executing its halfcourt stuff.
With East Davidson leading 43-40, Welborn, a tough matchup who had been very quiet, made three straight buckets to push the lead to 49-40 with 1:45 remaining.
“My shots weren’t falling most of the night, but I knew I had to pick it up and go harder,” Welborn said.
She did that, but North had one run left. Blaire scored on a drive, Farmer made two free throws, and Blaire found Farmer for a layup to cut the gap to 49-46.
Two free throws by Blaire made it 49-48, and then there was suddenly a wild scramble in the paint. North won that 50/50 ball, and Dixon’s final shot sailed toward the rim.
It was a bullet ED dodged.
“They’re much quicker than we are, so we thought we’d have to play zone and use our size,” Welborn said. “But man-to-man defense won it for us. I was proud of how well we played man-to-man.”
EAST DAVIDSON (49) — Plummer 16, Bell 12, Welborn 9, Morgan 6, Hallman 3, Grimsley 3, Beeson, Isom.
NORTH ROWAN (48) — A. Blaire 16, Dixon 13, Farmer 7, Washington 4, Robinson 4, Royer 4, Russell, White.
E. Davidson 13 17 9 10 — 49
N. Rowan 13 3 15 17 — 48