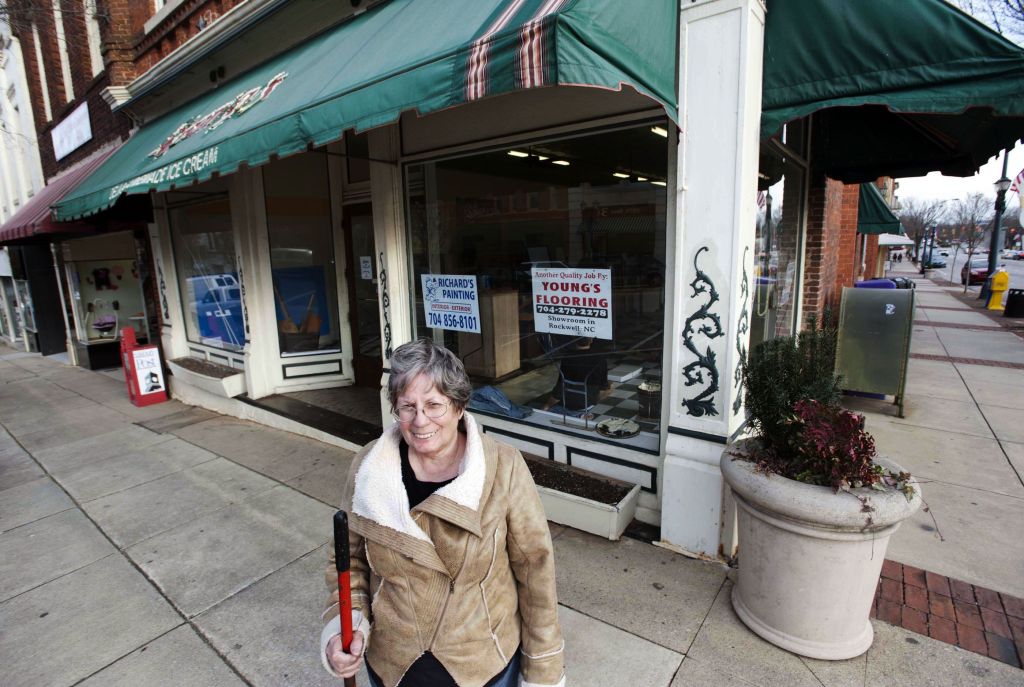 Come Tuesday, Karl and Rosemary Kinard will be happy customers again. Spanky’s is reopening.
“Thank the Lord,” Rosemary Kinard said Friday night. “We have been in serious withdrawal.”
Mike and Vicki Orlando, longtime owners of the popular eatery on the Square, retired at the end of December. Immediately, the new owner, Monica Lefler, began renovations. The restaurant is set to reopen Tuesday.
“So it’s basically been three weeks by the time we open,” Lefler said Friday afternoon, as a crew from Young’s Flooring of Rockwell furiously laid new floor tiles.
Some 18 months ago, Lefler, who lives near Salisbury, was trying to determine what she wanted to do next. Her husband, Doug, had died several years before.
“I thought maybe the plans he and I made together were not right for me going forward,” she said.
In September, she gave up her job of 26 years as district manager of Top Dining, which runs Arby’s franchises. So she knows a bit about the restaurant business. By chance, she found out Spanky’s was for sale. She made an offer the week of Thanksgiving, and closed the end of the year.
“I had looked around for something for a year and a half, and when I finally found something, it was real quick,” she said.
Although Lefler was not a regular customer, she and her younger son came for milkshakes all the time when he was little, she said. Lefler has two adult sons and a daughter. Family members are helping her clean and move equipment over the weekend. Supplies are set to arrive Monday, with the health inspector coming in first thing Tuesday morning. Then she’ll be set to go.
On Friday afternoon, everything was still out of place, but Lefler talked about the way the restaurant would look. Only a scrap of the familiar, faded balloon wallpaper remained on the floor in a corner, soon to be swept away by the workers’ brooms. The walls are now clean and white with bright orange trim and bright blue wainscoting — the paint job courtesy of Richard’s Painting.
Lefler found old downtown photographs — they came with the building — which she thinks were made around the turn of the century. She’s put cheerful blue frames around them.
“I just think blue and orange is a good scheme for an ice cream and sandwich shop,” she notes.
Lefler painted and reupholstered all the chairs in bright orange. The booth cushions also got a makeover. For the moment, the chairs are safe and clean in her garage. She chose green and white floor tiles to match the original, mosaic tiles that run from the front door down the center of the room.
During renovations, Lefler got lots and lots of calls, asking when the restaurant would reopen — and inquiries as to whether she’d keep those same delicious soup and sandwich recipes.
No worries. The answer is yes.
Besides the décor, the hours have also changed. Spanky’s will be open 9 a.m.-9 p.m. Tuesday-Saturday and noon-4 p.m. Sunday. Lefler said she believes there is enough activity going on in the evenings to warrant the extended hours.
Lefler has kept Spanky’s two part-time employees, adding six more part-time employees.
“Some have experience in food service and some do not,” she said. “There’s a lot of learning to be done by everyone, including me.”
She laughed heartily when asked what hours she’ll be working.
“I would think 64 hours a week for the first few weeks, at least,” she said.
That’s the entire time the restaurant is open each week, if you’re trying to do the math.
She added, “I’ve been putting in a lot of hours these last three weeks, so I’m used to it.”