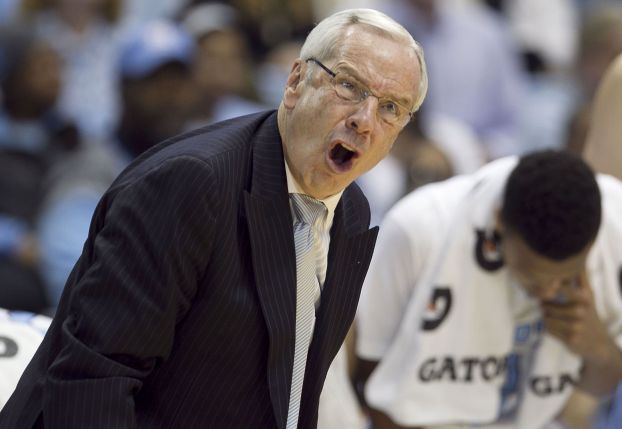 CHAPEL HILL — Roy Williams and North Carolina can breathe a little easier.
These Tar Heels won’t go 0-for-the-ACC.
North Carolina avoided the first 0-4 start to conference play in the proud program’s history by beating Boston College 82-71 on Saturday for its first league win.
“Very, very pleased, relieved — you can put any adjective you want to in there,” Williams said.
Marcus Paige scored 21 points and James Michael McAdoo added 17 points for the Tar Heels (11-6, 1-3), who shot nearly 53 percent in their highest-scoring conference game of the season.
“We had the right guys shooting the right shots,” Paige said. “Everybody, if they had a teammate with a better shot, they’d give it up. Just good ball movement, spacing, everything was clicking for us.”
Olivier Hanlan scored 16 points and Lonnie Jackson added 14 for Boston College (5-13, 1-4), which replaced North Carolina in the league cellar.
The Eagles hit 11 3-pointers but committed too many of their 18 turnovers at inopportune times, leading to their sixth loss in seven games.
“We’ve got to have under 10 (turnovers) to win the game,” coach Steve Donahue said. “That’s where we failed.”
BC pulled to 56-55 with 10 minutes remaining on Hanlan’s driving layup. But on their next nine trips downcourt, the Eagles managed just one basket and turned it over four times while allowing the Tar Heels to push their lead back into double figures.
“We made a few mistakes down the stretch that really cost us in the long run,” Hanlan said. “Whenever you’re trying to go over the hump, and nothing’s going in, those little turnovers are the type of plays that kill us.”
Paige converted a key three-point play one possession before Leslie McDonald’s 3-pointer — with Joe Rahon’s hand in his face — put North Carolina up 71-61 with 41/2 minutes left.
J.P. Tokoto finished with 14 points and McDonald and freshman Kennedy Meeks each added 10 for North Carolina, which had lost its first three ACC games for just the second time in school history and first since Dean Smith’s final season in 1996-97 — a slide that knocked the Tar Heels from the Top 25 to the bottom of the league.
“There’s a better feeling in that locker room, no question,” Williams said.
Many of the things that went wrong for them in those games went right in this one. In none of their other ACC matchups had they cracked the 70-point mark, shot better than 40 percent or forced more than 13 turnovers.
“That was our main focus all week — defensively, can we get better defensively?” Paige said.
They were coming off a 45-point effort at No. 2 Syracuse — their fewest in Williams’ 11 seasons at his alma mater — and needed fewer than 25 minutes of game action against BC to match that production.
“We still tried to pressure them a little bit, see if we could get the break going,” Williams said. “We did try to pressure them but — this will probably be an oxymoron — be conservatively aggressive. We just wanted to get a hand in the passing lane and not get too far out and open it up for backdoor cuts.”
Rahon finished with 13 points, Eddie Odio had 12 and Ryan Anderson added 11 with 12 rebounds for Boston College, which fell to 1-6 on the road this season and was denied its first victory at the Smith Center since 2009.
Paige scored 14 points and McAdoo had 11 during a first half in which North Carolina briefly pushed its lead into double figures. The suddenly efficient Tar Heels scored on nine of 10 possessions during a 5-minute stretch and led 22-11 on Paige’s drive.
BC hit six 3-pointers during the half, including two during the 11-2 run that tightened the game right back up. Odio’s 3 pulled the Eagles to 24-22 and another one from Jackson made it a one-point game with 41/2 minutes left.
BC never could manage to tie it, though the Eagles kept UNC within striking distance until the Tar Heels pulled away late.