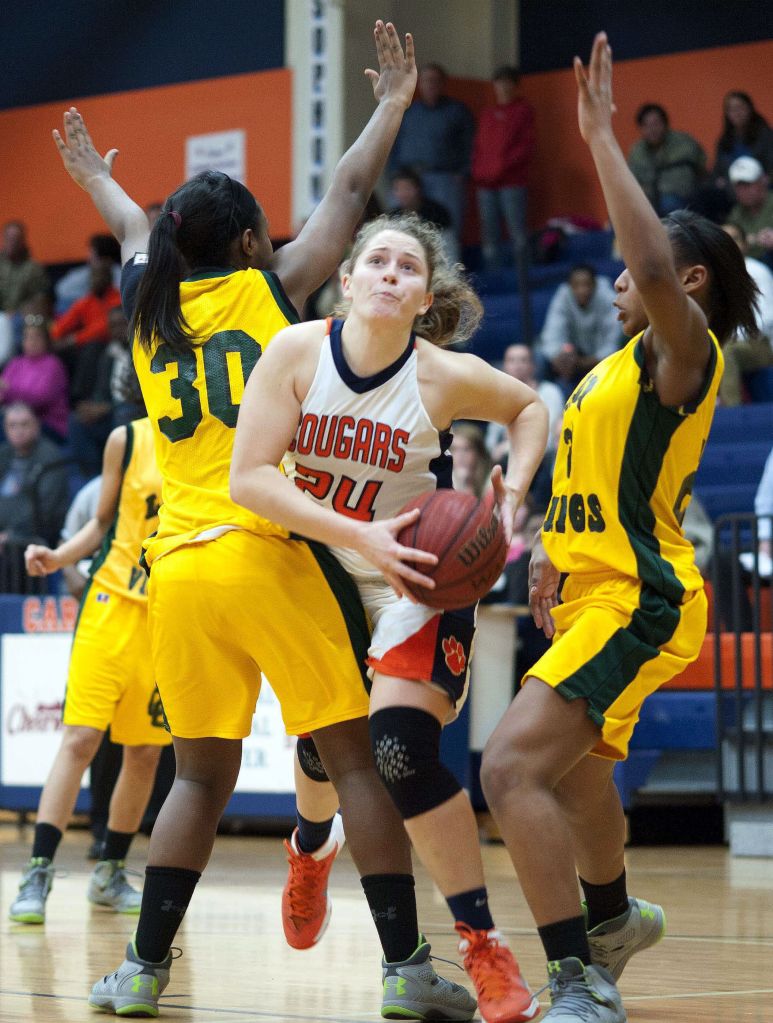 CHINA GROVE — Carson’s girls aren’t going to stay in the SPC race playing like this.
The Cougars turned the ball over 25 times, allowed a swarm of second and third shots and coughed up a seven-point fourth-quarter lead Friday night. It spilled out as an unsightly, 53-46 SPC loss to visiting Central Cabarrus.
“I saw a lot of great things out of our press. I saw a lot of energy. And I saw it all unravel in the fourth quarter,” CHS coach Brooke Misenheimer said. “Throughout the course of the game we gave up entirely too many offensive boards. They killed us on the boards. You give them that many opportunities and they’re going to make one.”
The setback dropped Carson (7-8, 5-4) into fifth place in the congested league standings.
“It was a winnable game — and that’s what makes it such a hard loss,” senior Kate Cole said. “This was a good chance for us to show we belong among the (conference) leaders. But at the start of the fourth quarter we had critical mistakes.”
Cole netted eight of her team-best 12 points in the first half as the Cougars hung around against SPC co-leader Central (9-7, 7-1). In the third period it appeared Carson was giving the rest of a league a reason to worry. It limited the Vikings to two field goals and used a 9-1 scoring spree and grabbed a 30-25 lead when Megan Gray sank the first of two free throws with 3:06 on the clock.
“We looked like we were almost shell-shocked,” said winning coach Brandon Blalock. “We were flat, dead, no pulse at all. But I give them credit. Thay took us out of our game.”
Their game didn’t include injured freshman guard Mahaley Holit — a major contributor who averages 17 points, five assists and six steals per game. Without her Central employed a three-guard offense triggered by Kelsey Adcock, who scored nine of her 14 points in the fourth quarter.
“In the third quarter we played with this intensity,” said Carson senior Jordy Clark. “Then in the fourth we got lazy. We weren’t boxing out. We weren’t challenging shots.”
Carson’s 35-28 lead was sliced to 35-33 after Central’s Sophia McFarlane muscled her way inside for a layup and Adcock completed a three-point play early in the final quarter. And when Adcock hit both ends of a one-and-one the guests had a 40-37 edge with 3:56 remaining.
“It was all things that were within our control,” Misenheimer said. “We were right where we wanted to be in the fourth quarter, but then we go and start making bad decisions. We have to be more disciplined from the tip until the final horn.”
It wasn’t a warm-and-fuzzy feeling. “Not at all,” Clark indicated. “You could feel the momentum changing. We built up that lead and thought we could slack off.”
Carson did rally to retake the lead, 42-40, when Alex Allen capped a three-point play and Cole followed with a layup with 3:31 to play. But it was to be the Cougars’ final basket of the night.
Central used a 13-6 finishing kick to cement the outcome. Ny’Asia Hagans’ driving layup from the left baseline with 2:25 remaining gave the Vikings a lead they never relinquished.
“We just have to make better decisions,” said Cole. “We were out of control. Our coaches always tell us it’s okay to be frantic on defense but not on offense. That was the problem.”
Misenheimer agreed. “There were a lot of people who didn’t play well tonight,” she said. “And we were still in the ballgame. It was turnovers and rebounds that made the difference.”
Carson will try to figure things out before it hosts East Rowan on Tuesday.
“We’ll have to box out better against them,” Clark noted. “If we don’t their big girls will have a field day.”