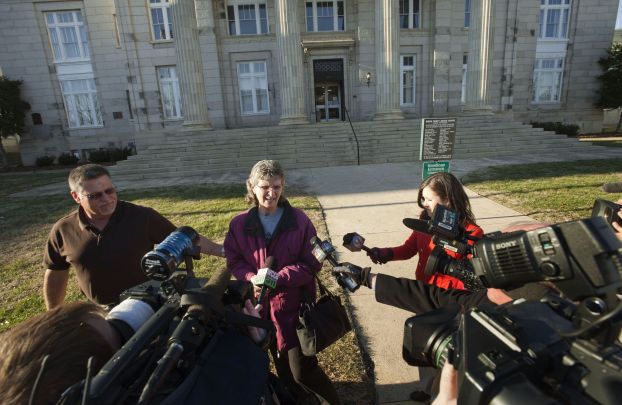 SALISBURY — The two youngest children of Sandy and Casey Parsons, the adoptive parents of missing teen Erica Parsons, will remain with their aunt and uncle for now.

The Parsonses attended a custody hearing Thursday in Rowan County District Court that was to determine with whom the children — Sadie and Toby — would be placed. But the judge decided to delay a final decision for 90 days. In the meantime, the children will continue to stay with Robin Ashley, Casey’s sister, and her husband.

Shortly after the investigation into Erica’s disappearance began, officials with the Rowan County Department of Social Services removed the younger children from the Miller Chapel Road home where the family lived at the time.

Casey and Sandy have been the subject of an investigation into the disappearance of their adopted daughter, Erica Lynn Parsons, who has been missing for two years.

Erica, 15, was last seen in November 2011, but was just reported missing by her adoptive brother, James “Jamie” Parsons on July 30 of last year.

Jamie’s conversation with Rowan County Sheriff’s detectives sparked an investigation that has gone on for nearly six months. His parents, Casey and Sandy, have said they allowed then 13-year-old Erica to live with her paternal grandmother Irene Goodman in Asheville. Investigators and family say Goodman, whom the couple knew as “Nan,” does not exist.

Erica has not been seen or heard from since that time, and the Parsonses now say they were duped into believing the woman who said she was Nan.

Casey’s sister, Tammy Gray, said the children have been in Robin Ashley’s custody since Sept. 12. Before that, they were in the custody of grandparents James and Shirley Stone.

Casey and Sandy have been allowed to see their children during weekly supervised visits.

Thursday’s custody hearing was continued from a December hearing where several members of the Parsons and Stone families testified before a judge.

District Court Judge Lillian Jordan closed the courtroom to everyone except family and those involved in the case.

Angela Laubscher, Casey’s aunt, spoke briefly with media after the hearing, which ended before 4 p.m., saying “everything stays the same.”

She said it was a relief for the family to know nothing has changed and the children will remain where they are currently.

Laubscher said the family doesn’t know when they’ll have to return to court.

The children, she said, are doing well in school and at home.

The judge gave the Parsonses a list of requirements that must be met, including counseling, drug testing and anger management for Sandy Parsons, according to WBTV. The judge also ruled that the Parsonses have to prove that Erica is alive or be able to explain what happened to her without sparking any criminal charges, David Whisenant reported.

Family members have said they witnessed repeated mental and physical abuse against Erica by Casey and Sandy, which the two deny.

Tammy Gray has also been vocal about her desire for the children to not be returned to her sister and brother-in-law.

Anyone with information about the disappearance of Erica Parsons is asked to contact investigators at the Rowan County Sheriff’s Office at 704-216-8700 or Crime Stoppers at 1-866-639-5245.