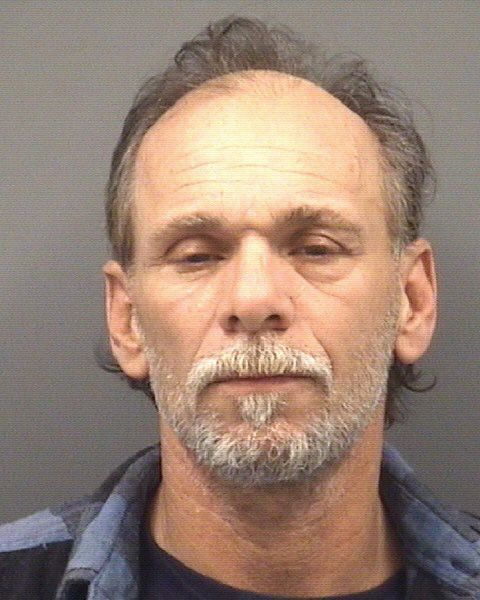 A Rockwell man with a violent past was recently charged with pointing a shotgun at his sister and another relative at their home. In the 1990s, he was convicted of raping, maiming and killing a woman in California and is a registered sex offender.
The Rowan County Sheriff’s Office charged George John Golliver, 51, of Tryon Road, with two counts misdemeanor communicating threats, misdemeanor carrying a concealed weapon, misdemeanor resist, obstruct, delay an officer; felony possession of a firearm by a felon, felony possession of a weapon by mass destruction and two counts misdemeanor assault by pointing a gun.
An officer went to Golliver’s home Thursday around 4:30 p.m. where his sister and another relative were there. The two said Golliver had pointed a shotgun at them and threatened to punch the sister and beat her up. Golliver walked up to the officer and told them he was a convicted felon and could not own a gun. The officer searched Golliver for weapons. He had a Bowie knife on him.
Golliver told the officer he forgot he had the knife and took off running. The officer ordered Golliver to stop or he would use a Taser. Golliver kept running, but was eventually stunned with the Taser.
The officer obtained a warrant to search a storage building located behind the home. While inside the officer located a sawed off 20-gauge shotgun underneath the mattress of his bed; ammunition was found in dresser drawers.
In December 1990, Golliver was convicted of second-degree criminal sexual conduct in New York. He was sentenced to more than 10 years in prison.
He was issued a secured bond of $35,000 for the weapons charges and $7,500 regarding the threats, resisting and carrying a concealed weapons charges. Golliver remains in the Rowan County Detention Center under a total bond of $42,500.
In 2010, Golliver was charged in Rowan County with failing to register as a sex offender and later that same year with malicious conduct by prisoner. He was convicted of those charges, both felonies, in July 2011.
Officials say Golliver is also a gang member. It is not clear what gang he is affiliated with. Sheriff’s officials also said Golliver threatened to kill a judge in 1990. The woman he was convicted of killing was mutilated, officials said Golliver bit off the woman’s finger.