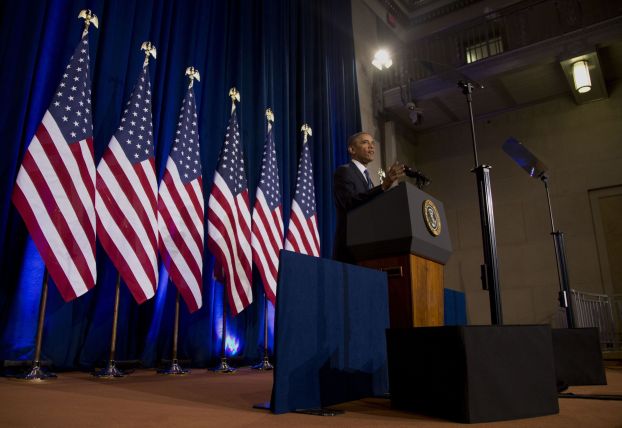 WASHINGTON (AP) — Seeking to calm a furor over U.S. surveillance, President Barack Obama on Friday called for ending the government’s control of phone data from hundreds of millions of Americans and immediately ordered intelligence agencies to get a secretive court’s permission before accessing such records. Still, he defended the nation’s spying apparatus as a whole, saying the intelligence community was not “cavalier about the civil liberties of our fellow citizens.”
The president also directed America’s intelligence agencies to stop spying on friendly international leaders and called for extending some privacy protections to foreign citizens whose communications are scooped up by the U.S.
Obama said the U.S. had a “special obligation” to re-examine its intelligence capabilities because of the potential for trampling on civil liberties.
“The reforms I’m proposing today should give the American people greater confidence that their rights are being protected, even as our intelligence and law enforcement agencies maintain the tools they need to keep us safe,” Obama said in his highly anticipated speech at the Justice Department.
“This debate will make us stronger,” he declared. “In this time of change, the United States of America will have to lead.”
Obama’s announcements capped the review that followed former National Security Agency analyst Edward Snowden’s leaks about secret surveillance programs. If fully implemented, the president’s proposals would lead to significant changes to the NSA’s bulk collection of phone records, which is authorized under Section 215 of the USA Patriot Act.
Even with Obama’s decisions, key questions about the future of the surveillance apparatus remain. While Obama wants to strip the NSA of its ability to store the phone records, he offered no recommendation for where the data should be moved. Instead, he gave the intelligence community and the attorney general 60 days to study options, including proposals from a presidential review board that recommended the telephone companies or an unspecified third party.
Privacy advocates say moving the data outside the government’s control could minimize the risk of unauthorized or overly broad searches by the NSA. However, the phone companies have balked at changes that would put them back in control of the records, citing liability concerns if hackers or others were able to gain unauthorized access.
There appeared to be some initial confusion about Congress’ role in authorizing any changes. An administration official said Obama could codify the data transfer through an executive order, while some congressional aides said legislation would be required.
Congress would have to approve another proposal from the president that would establish a panel of outside attorneys who would consult with the secretive Foreign Intelligence Surveillance Court on new legal issues that arise. The White House says the panel would advocate for privacy and civil liberties as the court weighed requests for accessing the phone records.
The moves are more sweeping than many U.S. officials had been anticipating. People close to the White House review process say Obama was still grappling with the key decisions on the phone record collections in the days leading up to Friday’s speech.
Obama only briefly mentioned Snowden, whose disclosures are largely credited with sparking the White House review.
“The sensational way in which these disclosures have come out has often shed more heat than light, while revealing methods to our adversaries that could impact our operations in ways that we may not fully understand for years to come,” Obama said.
While the president has said he welcomed the review of the nation’s sweeping surveillance programs, it’s all but certain the study would not have happened without the leaks. Snowden faces espionage charges in the U.S., but is currently living in Russia, where he was granted temporary asylum. Some privacy advocates have pressed Obama to grant Snowden amnesty or a plea deal if he returns to the U.S., but the White House has so far dismissed those ideas.
The surveillance revelations have caused particular anger abroad, especially over disclosures that the U.S. was monitoring the communications of friendly foreign leaders like German Chancellor Angela Merkel. Obama said new guidelines will cut back on foreign leader monitoring, expect when there is a compelling national security interest.
“The leaders of our close friends and allies deserve to know that if I want to learn what they think about an issue, I will pick up the phone and call them, rather than turning to surveillance,” Obama said.
The president’s changes are expected to be met with pushback from some in the intelligence community, who have been pressing him to keep the surveillance programs largely intact.
Reacting to reports of Obama’s plan, retired Gen. Michael Hayden, a former NSA director, said Friday that “no one will hold it (the phone data) as well.”
Appearing on NBC’s “Today” show, Hayden said there already has been “serious, irreversible harm to the ability” of the National Security Agency to collect intelligence.
The administration did not uncover any government abuse of the intelligence programs during its review process, officials said. But they said the president’s decision-making was colored by the potential for abuses as surveillance technology becomes increasingly powerful.
Many of the president’s recommendations were aimed at increasing the public’s trust in the spying operations. That includes lifting some of the secrecy surrounding the demands that might be sent to companies for data on customers involved in a national security investigation. The White House says those demands, called “national security letters,” will no longer remain secret indefinitely, unless the government establishes a need for the secrecy when they are being used in an investigation.
Roughly 20,000 such letters are sent yearly by the FBI to banks, telecommunication companies and other businesses, but recipients are barred from disclosing anything about them. Obama wants to change that and allow some of the information to be made public.
The president is also ordering the Justice Department and the Director of National Intelligence to look for ways to declassify future opinions from the FISA court.