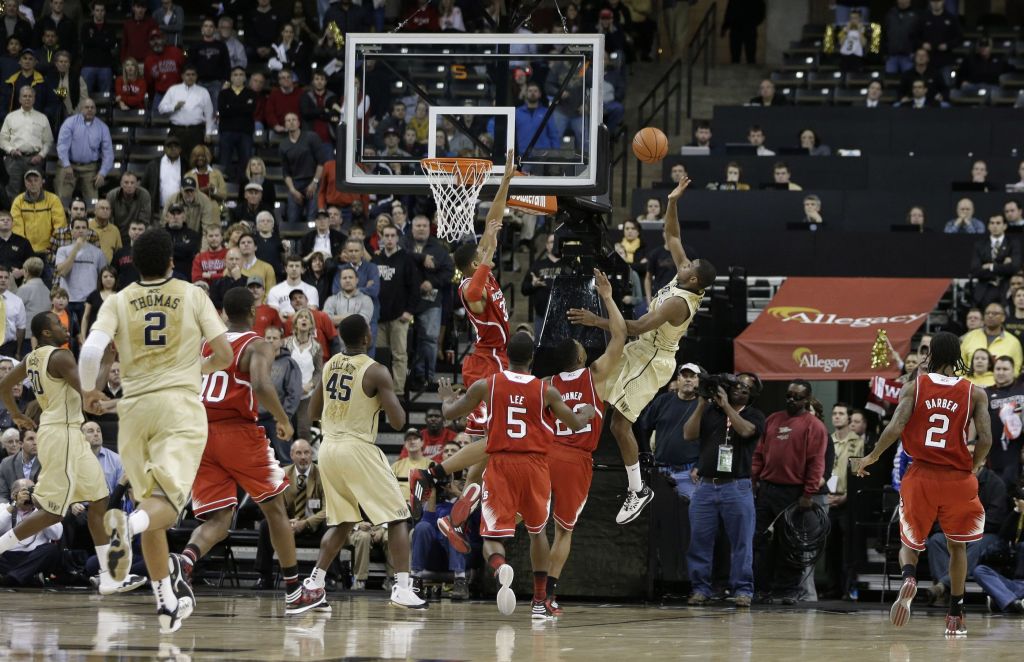 WINSTON-SALEM — Codi Miller-McIntyre inbounded the ball, got it right back and charged down the court with his team down a point.
It was the last-second shot Wake Forest’s floor leader was to more than ready to take.
“I wanted it,” he said. “What type of player would I be if I didn’t want it?”
The sophomore hit that runner while being fouled with 4.9 seconds left to help Wake Forest beat North Carolina State 70-69 on Wednesday night.
Miller-McIntyre scored 20 points, the last coming when he raced down court on that length-of-the-court inbounds play to hit the leaner while being bumped by Ralston Turner. Miller-McIntyre missed the free throw, but N.C. State’s Anthony “Cat” Barber wasn’t close on a desperation shot at the buzzer.
It was a big win for the Demon Deacons (12-5, 2-2 Atlantic Coast Conference), who had lost two straight since their upset of North Carolina here Jan. 5.
The win against the Wolfpack (11-6, 1-3) marked the first time the Demon Deacons had beaten UNC and N.C. State in the same season in four years, according to STATS LLC. It was the first time the Demon Deacons beat both at home in the same season since 2008-09, when Wake Forest rose to No. 1 in the national rankings.
“A lot of times, especially growing up, all you hear about in North Carolina basketball is N.C. State, Carolina and Duke,” said Miller-McIntyre, a Concord native. “And myself and my teammates are tired of hearing it. There’s another team in North Carolina, and I think that’s the message we’re trying to send.”
Devin Thomas added 16 points for Wake Forest, which made 28 of 39 free throws (72 percent) in an uncharacteristically steady performance at the foul line for one of the nation’s worst free-throw shooting teams.
Wake Forest shot 54 percent for the game, with Arnaud William Adala Moto turning in 15 points and a career-high 11 rebounds off the bench.
When this one was over, Wake Forest students — many of whom ran to midcourt to celebrate the win against the Tar Heels earlier this month — gathered near the baseline to shake hands with fourth-year coach Jeff Bzdelik and the Demon Deacons players. Wake Forest had lost by 23 at Virginia and by 15 at Pittsburgh since the 73-67 win against UNC.
“We definitely want to protect home court and definitely with N.C. State being right up the street, that definitely means a lot more,” senior Travis McKie said.
This was a painful loss for the Wolfpack, who were in position to ruin Wake Forest’s perfect home record when Desmond Lee knocked down two free throws with 10.5 seconds left for a 69-68 lead.
Wake Forest called timeout and ran the play for Miller-McIntyre, who inbounded the ball to Thomas and got it right back. He hesitated only once — he didn’t want to look at the referee in case the shot was waved off due to a traveling call.
McKie said he expected that to be the call. So too did N.C. State coach Mark Gottfried.
“I thought he traveled. I did,” Gottfried said. “But roll on. Play.”
N.C. State dominated the offensive glass and took a 23-4 edge in second-chance points, with most of that damage coming before halftime, but came up empty in Winston-Salem for the second straight season. After shooting 52 percent in the first half and leading 43-35 at halftime, N.C. State shot just 7-for-24 (29 percent) after halftime as Wake Forest went zone.
T.J. Warren scored 22 points for the Wolfpack before fouling out with 2:47 left. The foul trouble added up for N.C. State, with Warren, Kyle Washington and Jordan Vandenberg all racking up four fouls by the 10-minute mark of the second half.
In addition, backup guard Tyler Lewis didn’t play in the second half due to flu-like symptoms.
N.C. State has now lost two straight since winning at Notre Dame, including Saturday’s 31-point home loss to Virginia.
After the Demon Deacons tied it at 56 on two free throws from Adala Moto at the 10:08 mark, neither team led by more than four points. That came on Miller-McIntyre’s transition layup for a 62-58 lead with 61/2 minutes left.
“You always want to give yourself a chance to win the game, and we did that,” Turner said. “We just didn’t finish it off. That’s just a thing moving forward. Any time we get up like that, we have to finish it.”