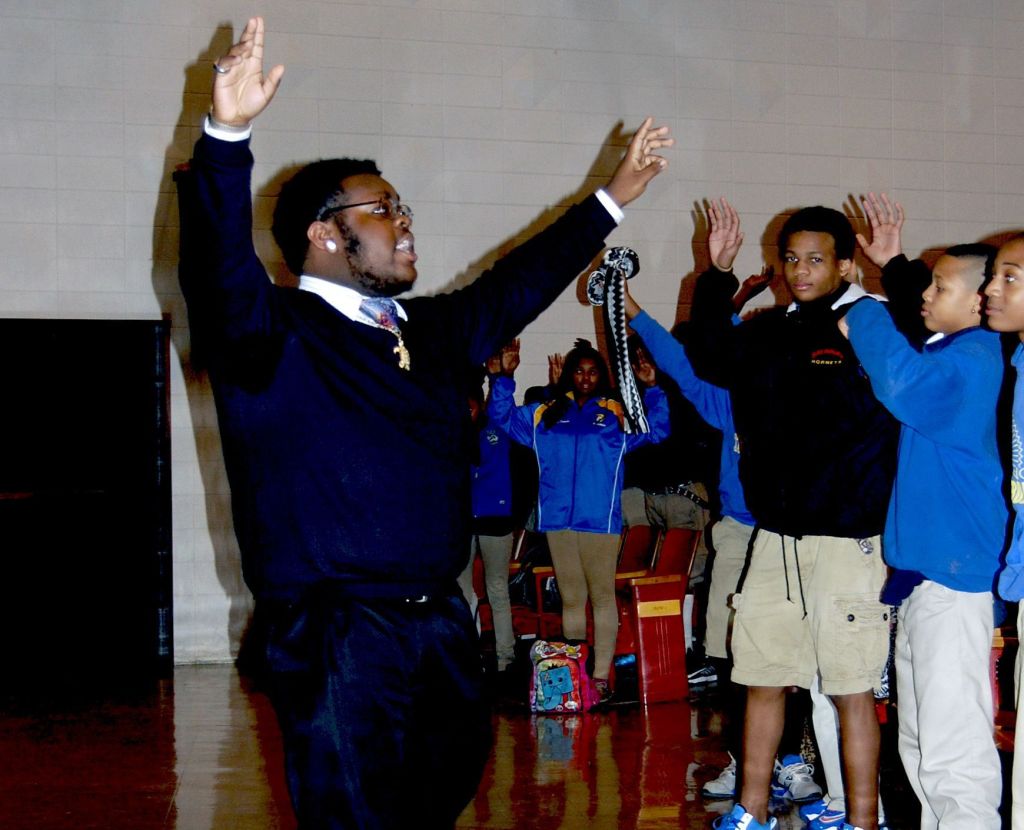 Four years ago, Allen Tulloch sat in Knox Middle School’s auditorium listening to Greg Commander share his story. Now a sophomore at Salisbury High School, Tulloch joined Commander in that very same room to share a piece of his own story Tuesday.
Commander said when he first met Tulloch, he was hardheaded, angry and had an attitude problem.
“At first, I didn’t really take him seriously,” Tulloch said.
Once he and Commander started having one-on one talks, however, Tulloch said he started taking things seriously.
“It was more of a slow turn around,” Tulloch said. “I used to be a hot head.”
Tulloch said the transformation wasn’t easy, but eventually he stopped wanting to fight and started treating others with respect.
Learning respect starts at home, he said. You have to learn to treat your parents with respect.
“Y’all don’t have no right to disrespect anybody,” he told the students in the assembly.
Tulloch said he wants to encourage students in situations similar to his to get an education.
“It’s not always going to be easy. You’re going to have bumpy roads,” he said
Tulloch plans to go to Syracuse University to study music and wants to eventually start a mentoring program.
“Allen is an example of “how we can change one child at a time,” said Knox’s Communities in Schools Site Coordinator, Bob Foreman.
Seeing people change “is what I live for,” Commander said. “I would do anything to get my story across.”
Commander’s story isn’t a pretty one.
He dropped out of school in the eighth grade and had three kids by the time he was 19.
“I let my pride and my ego take control,” he said.
When he was 19, Commander’s mother died and his father left home. His father said he would continue to pay the rent, but spent the money on crack cocaine instead, leaving Commander and his brothers without a home.
He was using marijuana and drinking alcohol, and he ended up selling drugs to pay his bills.
“One thing led to another,” Commander said, and his clique became the largest drug dealers in the city.
Eventually, they were arrested and Commander was sentenced to 24 1/2 years in a federal prison.
“I was lost and wondering what was I going to do,” he said.
When some of his friends began having a Bible study, Commander agreed to go.
I was willing to do “anything that would help me out of jail,” he said.
Commander began to see his life change.
“I got focused,” he said.
Commander earned his GED while he was in prison.
He was released after 18 years and went to Chicago and started speaking to youth groups there before deciding to come back to North Carolina to go to college.
Commander is now a full-time student at Laurel University in High Point with a 3.5 GPA. He’s working toward a degree in counseling so he can more effectively share his story and influence people.
“I believe that my life and my troubles was for me to uplift fallen humanity,” he said.
Commander and Tulloch’s message to Knox Middle School students was anything but sugarcoated.
Commander says he has a reputation for being “hard nosed” because of his blunt and sometimes harsh manner, but no one else will communicate with at-risk students in a way that they will receive it.
“Everything is bad in prison,” he told students. “Your attitude will get you there if your friends don’t get you there first.”
Tulloch, too, had strong words for the students. “Y’all think you’re runing something — you’re not running anything but your mouth.”
“Right now is the most important and critical point in your life,” Commander told students. “I’m feelin’ some type of weight because I know someone in here is going to drop out,” Commander said.
“Your job is to come in (to school) and get what you can get,” he added.
Tulloch said he came to Knox for the wrong reasons.
“I came here to impress the girls. I came here to fit in,” he said.
You should come to school to get an education, because it’s the “key to success,” Tulloch said.
He added, “Knox Middle School made me who I am today” because of teachers who cared and invested in his life.
“One thing I regret is letting my anger and temper get to me over little things,” Tulloch said.
Commander recalled telling Tulloch that he had to learn to deal with his anger without fighting.
“You have to take the anger out of your hands and put it back in your mind and deal with it,” he explained to Tulloch.
He also encouraged the students at Knox to find a role model, learn to carry themselves “in a respectful way” and pull their pants up.
Commander told the students to start by changing their environment, how they think and the people in their life.
“Your expectations and your bar should be high,” Tulloch encouraged the students.
The first year he tried to bring Commander to speak to the students at Knox, school administrators were wary about allowing a felon into the school, but after hearing his presentation, he’s been invited back every year.
Foreman, of Communities in Schools, said he tries to bring in people with a variety of backgrounds to talk to students at Knox. “Our goal is to help kids prepare for life,” Foreman said.