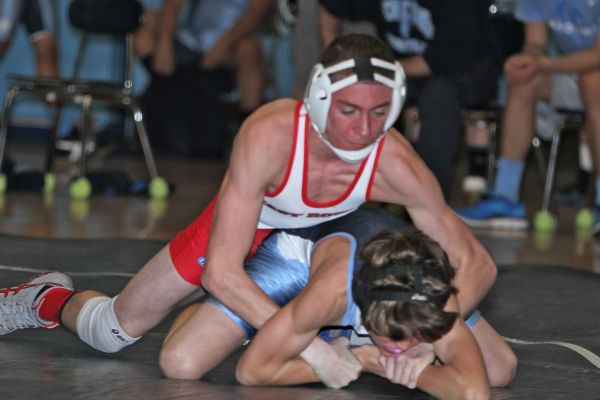 GRANITE QUARRY — For two years, Sam Cornacchione was chasing his teammates.
Now, as a junior and a first-time starter at 106 pounds, he’s leading them in a surprising wrestling season in which the county-champion Mustangs have caught fire.
As captain, Cornacchione (pronounced corn-uh-chone) arrives on time every day. He’s responsible for guys getting loose and getting their work in. He leads the team exercises for head coach Barry Justus.
“When you’re voted captain by your teammates, you do take it seriously,” Cornacchione said. “You try to take it just as seriously as possible — without being annoying. The guys understand that when they come in the room, we have to get work done.”
Cornacchione has wrestling in his blood. His older brother Nick was a standout at East and climbed the podium as the fifth-place finisher in the 2011 3A state meet.
Nick’s success set the bar high for Sam, who had two “pretty rough” years. Sam was a 76-pound freshman. He weighed only 90 pounds as a sophomore when he served as the backup to Logan Haas, who was a state qualifier at 106.
But Cornacchione, who wrestles diligently year-round, eventually started to augment his work ethic with added weight and muscle.
“My natural weight now is probably 110,” Cornacchione explained. “I have to cut a few pounds now, but not nearly as much weight as most guys.”
Haas is wrestling with great success this season at 120 pounds, and that left 106 vacant for Cornacchione. Cornacchione has taken his opportunity and run with it. He’s had strong showings in East’s tournaments — first place at Greensboro Dudley, second at Mount Pleasant and High Point Andrews, third at Marvin Ridge, fourth at Winston-Salem Parkland.
“He’s a very positive kid, he’s an extremely hard-working kid, and he gets it done,” Justus said. “When he loses a match, he tries to figure out why. You enjoy coaching kids like that.”
Cornacchione has been one of many success stories for East. He’s ranked 10th in 3A in his weight class, remarkable for a first-year starter. He had no idea he was ranked until his brother pointed it out to him. His record is 28-7.
“There are times when I catch myself thinking that I’m still that kid trying to catch up with everyone else, but I really can’t think that way anymore,” Cornacchione said. “Now I have to think of myself as one of the guys that needs to win.”
Cornacchione is still improving. He’s not as fast as Justus wants him to be, and he acknowledges that’s where he’s got room for serious growth.
“I have all the moves down, but speed is my biggest problem,” he said. “I’ve just got to work on hitting my moves faster and hitting them harder.”
Justus says he didn’t anticipate’s East’s county, tournament and conference success. Too much inexperience. Too many new faces.
“No, I really didn’t see the wins coming, not with so many freshmen and so many first-year kids,” he said. “But until you get in the room, until kids start dropping weight and filling out the weight classes, you really don’t know what you have. And our freshmen have come through and filled the holes.”
Cornacchione is as excited about the freshmen as Justus.
“They’re showing that Erwin has a very good program,” Cornacchione said. “The only difference in a freshman and one of the older guys is we don’t get on the freshmen when they lose. But we expect our freshmen to wrestle just like everybody else.”
East has numerous standouts.
Wyatt Blume is ranked No. 1 in 3A at 152, while Shiheem Saunders is ranked No. 7 at 170.
Haas (120), Luke Miller (145), Max Wall (160) and Blume, who placed fifth in the state at 145 last season, joined Cornacchione as Rowan County champions. Wesley Porter (132) and Jake Boltz (182) are consistent winners.
East (4-0 SPC) is on the road tonight at Cox Mill, and Justus believes the winner of the match has a great opportunity to emerge as the South Piedmont Conference champion.
Cox Mill has the more experienced team. The Chargers are led by senior Kyle Ocker, ranked fourth in 3A at 145, and seniors Tanner Small (182) and Nathan Rodgers (160).
“We know it’s going to be a very tough match,” Cornacchione said. “If we win the matches we should win, then it’ll come down to those two or three that can go either way.”