Laugh Tracks shows will blend a variety of comedy styles 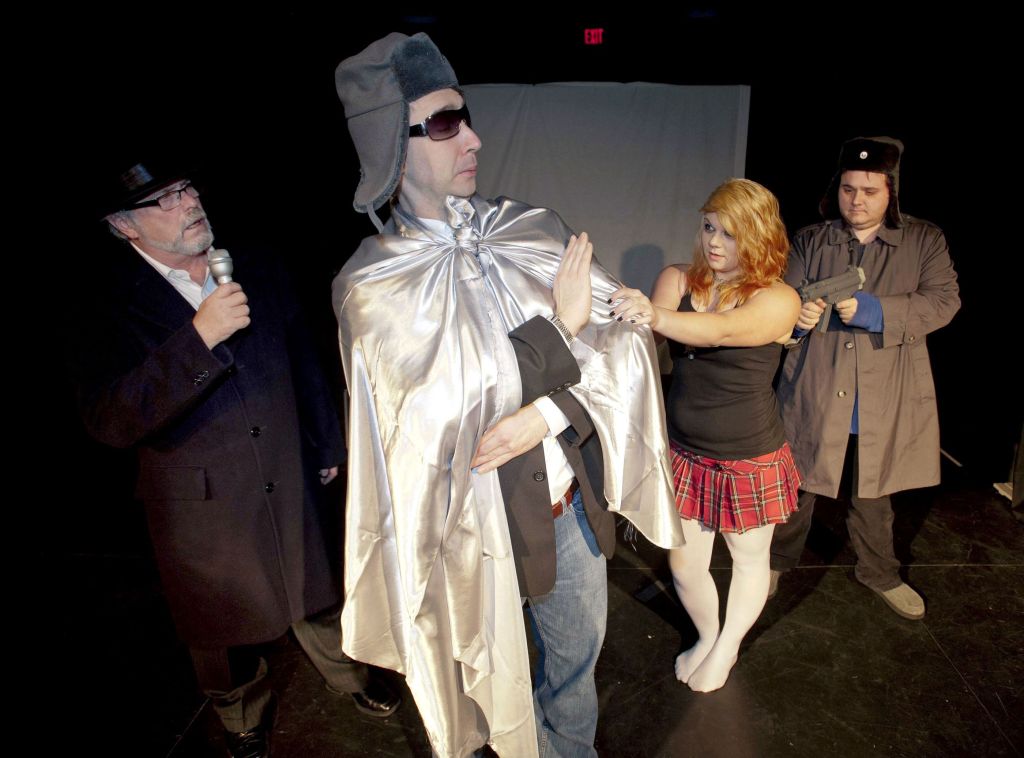 Rick Godby said those who attend the first Laugh Tracks shows this weekend can expect a unique blend of comedy that includes satire, slapstick and the flat out absurd.
“There are a lot of different comedy styles,” said Godby, the group’s lead writer. “We’re really kind of modeling it after ‘Saturday Night Live,’ but it’s a really diverse show with multimedia elements including video.”
Salisbury native Sam Post launched Laugh Tracks in December.
The group will perform bi-weekly shows at Spoken Space Theatre, a venue formerly known as the Looking Glass Artists Center.
The inaugural shows will take place at 8 and 10 p.m. Friday and Saturday.
Bob Paolino, a Salisbury resident who often appears in local and regional stage productions, will serve in a dual role as the guest host and the musical performer for the first round of shows.
He is set to do an opening monologue before participating in about four of the skits.
“This is the first time I’ve done this kind of sketch comedy,” he said. “It’s great because it’s a ton of fun and it is a collaborative effort. We’ve created a lot of good moments in the skits just by throwing around ideas the actors and the writers come up with together.”
Paolino said he expects attendees to be thoroughly entertained.
“I think they’ll really get their $10 worth,” he said. “This is a first for Salisbury – we’ve never done anything like this before – so it’s going to be fun.”
Director Chuck Carte said he draws inspiration from television programs like “Carol Burnett Show,” and “Saturday Night Live” as well as the famous comedy troupes “Kids in the Hall” and “Upright Citizens Brigade.”
“The audience can expect a show that has a very local, Salisbury touch, but also a broad scope that I think will reach everybody on a different level and in a different way,” he said.
Carte, who is also a member of the writing team, said the group edits each other’s work before the actors stage it. Then, they rewrite some more.
“We want the scripts to be as good as they can ever be,” he said.
Carte said many of the sketches he writes are based on real life.
“The old adage is true – to a degree, art does imitate life,” he said. “And if you can make that imitation funny I think you’ve really got something.
“We touch on some local things that are going on politically and issues that would concern the average citizen.”
Carte said having a new guest host and musician each weekend will keep the shows from becoming stale.
Debbie Hubbard will serve as both in the next round of shows set for Jan. 31 and Feb. 1.
“The shows are painstakingly crafted, so that they are topical every week,” Carte said. “Every two weeks we throw a show away and come out with a new one; nobody’s doing that right now.”
Writer Cindy Hutchins said she believes the Laugh Tracks show will be a completely new experience for many local residents.
“They are going to be able to come in and sit on the couches and be comfortable and see a really good show,” she said. “I think this is something they are going to want to come for each new show.”
Hutchins said she’s been impressed by the acting caliber of the cast.
“We’ve just sort of given them these characters and they’ve really, really brought them to life,” she said.
Godby said the sketches are short, so “if you don’t like the first one, you’ll probably like the second one.”
“We’re trying to have a good variety and keep the quality of the shows up,” he said.
Godby said the group is still looking for writers, actors and technical crew members to join the team.
“One of my worries is the actors and writers getting burnt out,” he said. “That’s why we’re continually looking for more people, so that we can work on a rotation basis.”
Hutchins said she expects the shows to continue evolving and get better every week.
“We’re going to keep it fresh and different,” she said.