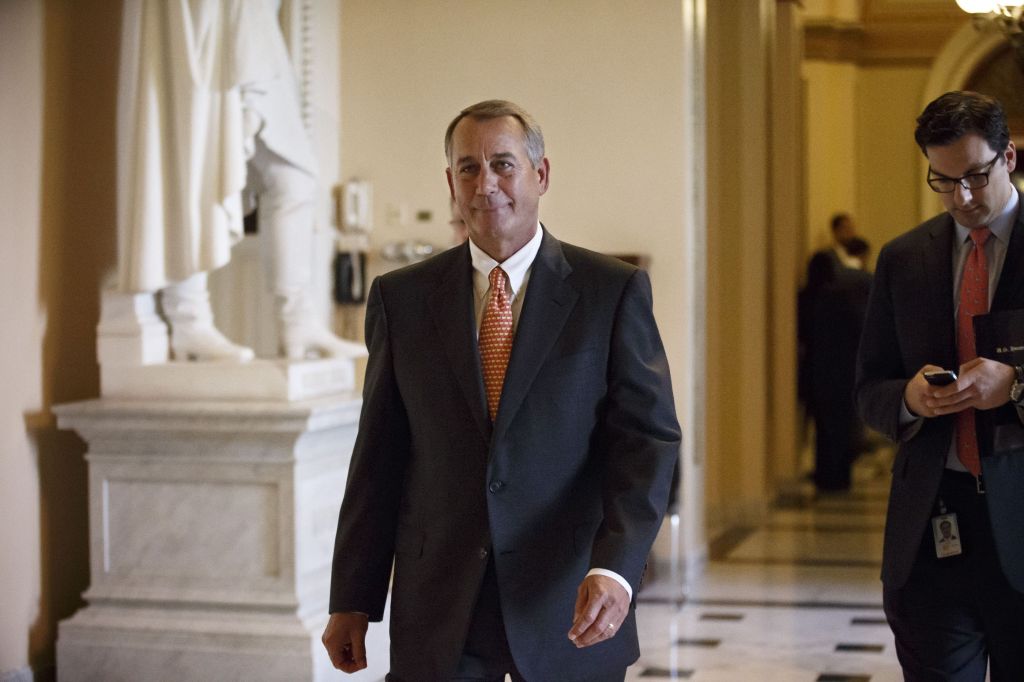 WASHINGTON (AP) — A $1.1 trillion spending bill for operating the government until just before next fall’s election steamed through the battle-weary House on Wednesday over tepid protests from tea party conservatives, driven by a bipartisan desire to restore painful cuts in domestic and defense programs and show disaffected voters that Congress can do its job.
The bill swept through the House on a 359-67 vote and was on track for a big Senate vote by week’s end. Republicans voted for the bill by a 21/2-1 margin, and just three Democrats were opposed.
The measure funds virtually every agency of government and contains compromises on almost every one of its 1,582 pages. It covers the one-third of government spending subject to annual decisions by Congress and the White House, programs that have absorbed the brunt of budget cuts racked up since Republicans reclaimed control of the House three years ago.
Excluded are the giant benefit programs like Social Security, Medicare, Medicaid and food stamps that run on autopilot and are increasingly driving the government deeper into debt.
Tea party Republicans, chastened after sparking a 16-day partial shutdown of the government in October in a kamikaze attempt to derail President Barack Obama’s health care law, appeared resigned to the bill.
“I don’t think there’s going to be a lot of opposition,” one tea party leader, Rep. Raul Labrador, R-Idaho, said before the vote. “The die has been cast for the next year on budget fights.”
To buy time for the Senate debate, Congress on Wednesday sent President Barack Obama a three-day funding bill in time to avert a scheduled shutdown at midnight. The Senate cleared that measure by an 86-14 vote.
The bill increases core agency spending by $26 billion over the fiscal 2013 year that began Oct. 1, after last year’s automatic spending cuts took them to $986 billion. But it’s $31 billion less than Congress passed last March before automatic cuts known as sequestration took effect.
The Pentagon faces a tight squeeze even as it avoids what would have been another $20 billion wave of automatic cuts. The Pentagon’s core budget is basically frozen at $487 billion after most accounts absorbed an 8 percent automatic cut last year. Adding $6 billion to Obama’s war request provides some relief to readiness accounts, however, though active duty troop levels would still be cut by 40,000 to 1.36 million. It includes $85 billion for overseas military operations, a slight cut from last year.
Domestic programs generally fare better and are kept, on average, at levels agreed to last year before the automatic cuts of 5 percent kicked in across the board. Those broadly applied cuts, called sequestration, were triggered by Washington’s inability to follow up a 2011 budget deal with additional deficit savings.
NASA, the FBI and the Border Patrol all won spending increases at the expense of cuts to the Transportation Security Administration, Internal Revenue Service and foreign aid. There’s money to repair the iconic cast iron dome of the U.S. Capitol, full funding for food aid for low-income pregnant women and their children, and a $150 million increase over 2013 for high-priority transportation infrastructure projects. Army Corps of Engineers construction accounts get a more than $300 million hike over Obama’s request for flood control, shoreline protection and environmental restoration and other projects.
The bill fills out the budget agreement sealed last month by Sen. Patty Murray, D-Wash., and Rep. Paul Ryan, R-Wis., the heads of the House and Senate Budget Committees. Murray and Ryan left it to the chairmen of Congress’ appropriations committees, Sen. Barbara Mikulski, D-Md., and Rep. Hal Rogers, R-Ky., to work out the details.
The measure changes a Ryan-Murray provision cutting military pension cost-of-living increases for working age retirees to exempt disabled veterans and surviving spouses from the cut. The Veterans Administration gets an almost automatic boost of $2.3 billion, almost 4 percent, driven by increased health care costs.
The lowest-common-denominator bill doesn’t contain big-ticket wins for either side, but the simple fact that a deal came together was seen as a win for Congress as an institution and its band of 81 appropriators. House Speaker John Boehner, R-Ohio, strongly pushed for a deal, even though the end product was a six-inch-high “omnibus” compilation of what was supposed to be a dozen separate spending bills. Presidents and lawmakers alike deride such measures.
The alternatives, however, were to allow automatic spending cuts to strike for a second year and risk another politically debilitating government shutdown.