Gearing up to go down under 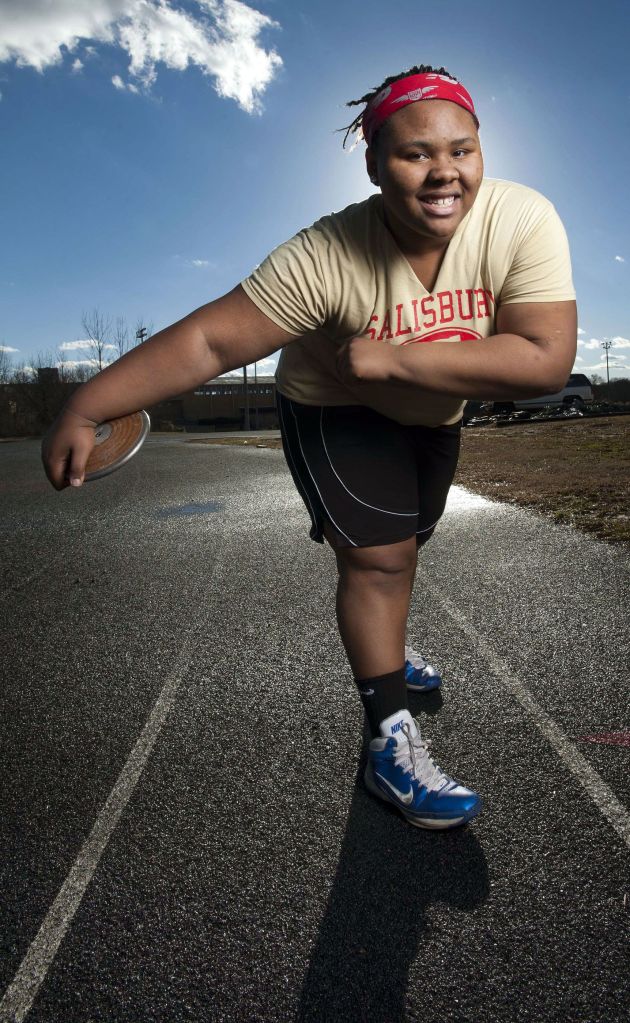 Cheyenne Gloster joined the track and field team in eighth grade to stay in shape for basketball, but now the senior at Salisbury High School has been selected to represent North Carolina on the U.S. track team at the 2014 Down Under Games in Brisbane, Australia.
Gloster is the first Salisbury High School student to be selected to attend the games.
The day after Christmas, Gloster received a call from a Down Under Games recruiter inviting her to participate.
“I was just excited. It was like God giving me a Christmas gift,” she said.
Job Cyril, Gloster’s recruiter, said she was picked because she is an “excellent discus athlete.”
Gloster will travel to Australia in July to compete in the shot put and discus events. She will be one of 15 members of North Carolina’s team.
She will spend three days competing against athletes from all 50 states and south Pacific nations such as Australia, New Zealand, Tonga and Fiji.
The games give student athletes the unique opportunity to travel internationally and experience new cultures while competing in track and field, cross country, wrestling, American football, volleyball and basketball.
In addition to competing, Gloster and her fellow teammates will get to “go shopping and have fun” at the Great Reef Barrier, Australia’s Gold Coast and Waikiki, Hawaii.
Gloster said she’s most excited about going surfing and visiting amusement parks.
“I’ve always wanted to go surfing, so that will be cool,” she said.
The nine-day trip costs $6,700. Gloster is selling T-shirts to help supplement the cost.
Gloster is ranked No. 1 in North Carolina and is seeded No. 1 going into the state meet.
This year, she qualified for states during the first meet of the season for indoor shot put. Her current shot put record is 38 feet and 4 inches, and her current discus record is 118 feet and 3 inches.
She was the all-county player of the year and the MVP at the county meet for field events during the 2013 season.
She placed in the top 10 at the New Balance Outdoor Nationals at North Carolina A&T University in June.
Gloster continued to play basketball through her junior year of high school, but she decided to focus on track and field her senior year.
Gloster moved to Salisbury in the summer of 2007 and lives with her mother and sister.
She plans to attend a four-year college and major in music production and minor in business administration.
Gloster has been offered track and field scholarships at Winston-Salem State University, University of North Carolina at Charlotte or University of North Carolina at Pembroke and Queens University of Charlotte.