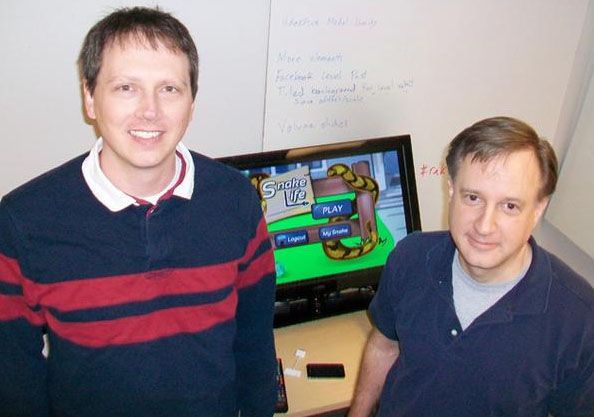 DURHAM (AP) — With mobile phones in many people’s pockets and TVs up on their walls, Rob Witman believes that the future of video game play will combine the two technologies.
Witman, 36, is the founder of the two-person Durham start-up company Splitmo, which is developing games that are played using mobile iPhones and iPad tablets, while viewed on TV screens.
The company is looking to release a new game this week, and has recently landed a new partnership for one of their existing games.
“We are working on mobile/TV connections because we see that as the future,” Witman said in an email. “It is still early, but it is coming, and this could very well be the first year it goes mainstream.”
The company is expecting to launch a new, free game called “Snake Life” that will be available as an iPhone or iPad app and for use on the Apple TV. The idea is based off a simple game that Witman said he played on his calculator in high school math class.
“What else were you going to do in math class?” he said.
Demonstrating how the game is played, Witman used his mobile phone to navigate a snake around the TV screen, accumulating points by eating mice.
“It’s a simple concept — it doesn’t take much thought,” Witman said.
Witman and Phil Jacobsen, the 47-year-old principal engineer for Splitmo, designed the game in-house in about six months. They did all of the development, but contracted out the music and artwork.
While the game is free to play, users can pay for extra features. Witman said they’re choosing to launch the game now because it’s a quieter time in the industry after the big holiday push, Witman said.
“However, people still have their gift cards, and new devices are getting a lot of use, so this ends up being a nice time to launch a game for smaller development shops like us,” he said.
And recently, they landed a deal to have their first game — a video poker game called “Poker Night TV” — available to AT&T U-verse TV subscribers.
AT&T U-verse, which is available now in Chapel Hill, but not in Durham, is a digital TV, high-speed Internet, and digital phone service delivered over fiber-optic technology. Customers play the free, digital version of “Texas Hold’em Poker” by connecting their smartphone or tablet to their U-verse TV receiver over Wi-Fi.
The game has already been available for Apple TV device users.
While he said he couldn’t release specific revenue or usage information, Witman said the company is currently privately funded using revenue from his last start-up, which is called RiffWare. They’re not cash-flow positive yet.
Mobile gaming is a competitive business, but Witman said there’s the hope of enjoying success seen by other developers. “Candy Crush Saga,” a top grossing free iOS app by King.com, was estimated by Think Gaming to generate $946,788 in daily revenue.
While Witman said that’s an “aberration,” that’s the hope.
Lewis Ward, research director of gaming for International Data Corp., a provider of information technology, telecommunications and consumer technology market information, said in terms of revenue, mobile gaming was still smaller in total revenues than console or computer games, but revenues for mobile games grew faster in 2013.
“It’s definitely a growing market,” he said.
And in terms of connecting handheld gaming devices to TVs, Ward said recent survey data has shown that it’s not “through the roof,” but is noteworthy. The ability to connect a smartphone to a TV for gaming threatens companies in the traditional console game business like Nintendo Co. Ltd., Microsoft Corps., and Sony Corp., he said.
“At least, casual games — the type of games that are very popular on smartphones and tablets — are going to be able to move those experiences on to the living room big screen, and have less of a (reason to have game consoles to play similar games,” he said.