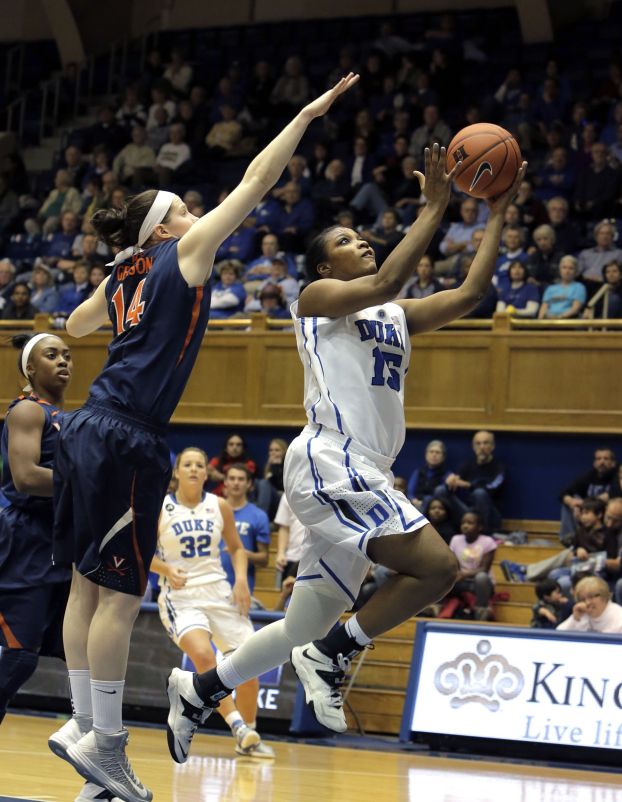 DURHAM, — Tricia Liston and Duke did quite well in their first game since Chelsea Gray’s season-ending knee injury.
Liston scored 21 points and tied her career high with 12 rebounds, leading the third-ranked Blue Devils to a 90-55 victory over Virginia on Thursday night.
The Blue Devils (17-1, 4-0 Atlantic Coast Conference) had five players score in double figures in the biggest rout in the history of the series. They shot 56 percent from the field, compared to 31 percent for Virginia, and also outrebounded the Cavaliers 50-36.
Elizabeth Williams had 17 points, seven rebounds and six blocked shots for Duke, which beat Virginia for the 21st straight time. Richa Jackson – Gray’s replacement in the starting lineup – finished with 16 points, freshman Oderah Chidom had 11 and Alexis Jones scored 10.
Gray broke her right kneecap Sunday against Boston College, sidelining the senior guard for the rest of the season. She dislocated the same kneecap last season, keeping her out of the ACC and NCAA tournaments.
“I thought it was a great team, aggressive effort,” said Duke coach Joanne P. McCallie, whose team won its 41st straight conference game at Cameron Indoor Stadium. “Everybody contributed and everybody attacked.
“We tried to keep pace and push the tempo and I thought we did a better job of doing that, Tricia hitting the boards like she did and competing like she did. And Richa was dead on and very balanced. We talked as a group (about Gray), but I didn’t have to emphasize anything. What are you going to say? We all took it to heart and we’ll continue to take it to heart. We miss her a lot, but she’s a great coach on the sideline.”
The Blue Devils shot 55.9 percent from the floor to Virginia’s 31.0 and won the rebound battle 50-36.
No. 2 NOTRE DAME 109, PITTSBURGH 66
PITTSBURGH — Kayla McBride and Jewell Loyd scored 20 points apiece to lead No. 2 Notre Dame to a 109-66 victory over Pittsburgh on Thursday night.
The Fighting Irish (16-0, 4-0 Atlantic Coast Conference) had five players score in double figures. Natalie Achonwa had 14 points, reserve Michaela Mabrey scored 13 and Taya Reimer had 10.
Brianna Kiesel led the Panthers with 20 points on 5-of-12 shooting. The junior guard made all eight of her free-throw attempts and converted 2 of 3 attempts from beyond the arc.
Marquel Davis added 10 points for Pitt (9-9, 1-3).
The Irish grabbed control with a tiebreaking 12-0 run early in the first half and led 54-25 at the break. The advantage ballooned to as many as 45 points in the second half.
Kiesel, who had played over 100 consecutive minutes, rested for the final 10-plus minutes. The Irish played the final nine minutes without a single starter on the floor.
Notre Dame shot 61 percent (40 for 66) from the field and held Pitt to 37.1 percent shooting. The Panthers had only nine field goals on 28.1 percent shooting in the first half.
The Irish were dominant inside, outscoring Pitt 46-18 in the paint and outrebounding the Panthers 35-31.
No. 20 N.C. STATE 80, No. 17 FLORIDA STATE 57
RALIEGH — Markeisha Gatling shot 8 for 8 from the field for 20 points on Thursday night as No. 20 North Carolina State beat No. 17 Florida State 80-57.
Kody Burke scored 16 points and grabbed 10 rebounds for her 14th career double-double. Myisha Goodwin-Coleman made four 3-pointers and Lakeesa Daniel had 13 points and eight rebounds coming off the bench.