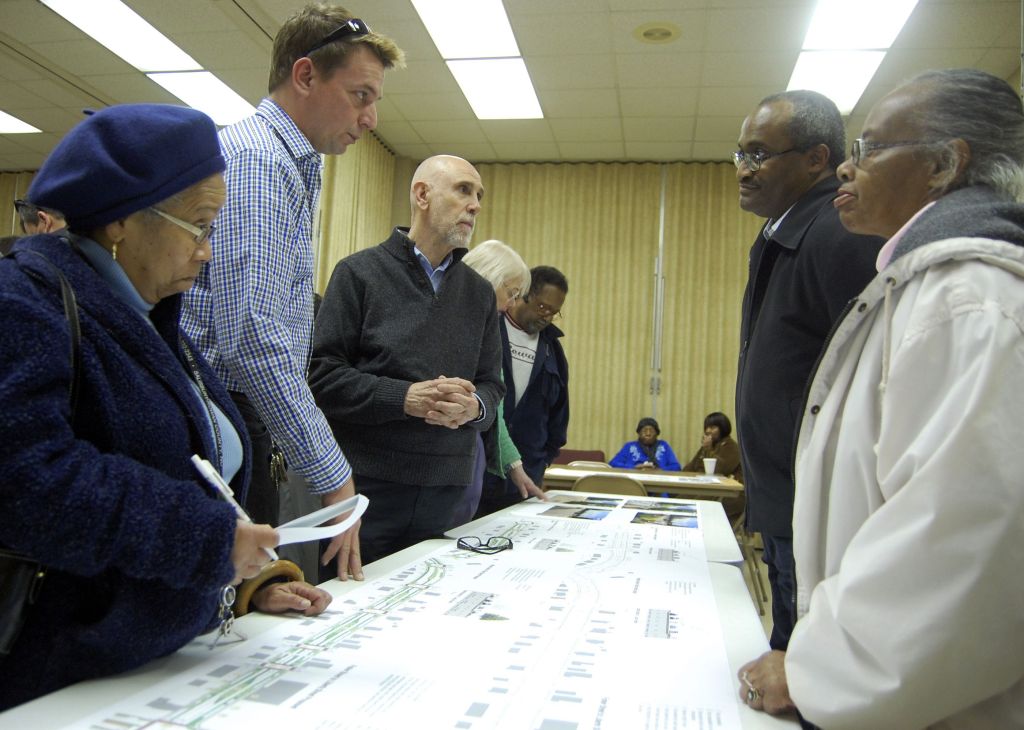 SALISBURY — Suggestions to make Long and East Innes streets safer for pedestrians and cyclists met resistance Tuesday night at a public input session.
Members of First Calvary Baptist Church on South Long Street voiced stiff opposition to a “road diet” for South Long, which would take the four- and five-lane road down to two lanes with a turn lane and median.
Business owners opposed medians on East Innes Street.
Several residents spoke out against bike lanes.
“We’re hearing something new, and we’ll go forward with it,” said Glen Walters of Design Workshop in Asheville.
A team of designers from Raleigh and Asheville has been working on the $120,000 study of the East Innes and Long street corridors called Complete Streets. The deaths of two pedestrians who were crossing East Innes prompted a closer look at pedestrian safety in the area.
While previous meetings — an evening public forum in September and a three-day design charrette in October — reflected support for medians, bike lanes, curb bump-outs and other ways to slow traffic and make it safer to cross the street, many people at Tuesday’s gathering opposed the suggestions.
Several said the city should do nothing to impede traffic or risk hurting businesses.
Dwight Allen, co-owner of Sam’s Car Wash, said the city should cater to motorists, not pedestrians, because most business is conducted by people in cars.
But Eric Phillips, owner of Skinny Wheels Bike Shop, said statistics show that making a community less convenient for cars and safer for pedestrians and cyclists helps businesses grow.
Mayor Paul Woodson told the Post he does not support medians on East Innes because drivers could not turn left and would cut through neighborhoods to avoid traffic delays.
“Medians will bog down traffic,” Woodson said. “It will hurt businesses.”
Woodson said he thinks the best solution is more lighting at Innes and Shaver Street — where the pedestrians were hit near the Wilco Hess — and perhaps a small median on South Long Street for children to use while crossing to Lincoln Park Pool.
More than 50 people attended the gathering, held at the church because members are stakeholders in the proposed changes. Church members were largely opposed to the suggestions, but cyclists and homeowners turned out to support the proposal.
William Peoples, who serves on the Complete Streets steering committee, said church members and some who live in the community are leery of changes proposed by the city because the neighborhood has been decimated before.
“There is no trust,” Peoples said.
To the designers’ surprise, many people opposed taking South Long from four lanes to two lanes with a turn lane and median, which the designers said would slow traffic and give pedestrians safe harbor while crossing.
Consultant George Alexiou said the design team is trying to correct the mistake made years ago by turning Long Street into four- and five-lane road.
“We are trying to improve the community,” Alexiou said.
But the Rev. Leamon Brown, pastor of First Calvary Baptist, said church members like the way traffic flows on South Long and are afraid that removing a lane would impede funeral processions.
“The medians look like clutter,” Brown said after viewing drawings. “It’s too much at one time.”
Brown said the church wants a traffic signal at the corner of Long and Monroe streets, and the design team agreed.
“We asked for one 800 different ways,” Drake Fowler said.
But vehicle counts are too low to meet the state’s standard for a signal, even after increased traffic on Monroe after the state closed a nearby railroad crossing. Traffic counts on Long are not projected to increase much in the next 20 years.
Homeowner Jo-ann Hoty said the Complete Streets plan is “gorgeous” and would make the street safer for people who are not in cars. Hoty lives on South Long and said she cannot walk her dog without fear of being hit by a car.
Hoty said the proposal to narrow the distance it takes to cross South Long would help reunite the two sides of the neighborhood.
“I can’t see why you don’t want it back,” she said.
Peoples told the Post he supports some parts of the plan and believes church members may change their minds. For many, Tuesday’s meeting was their first look at drawings and photo illustrations of the proposed changes.
“Nobody has convinced people that this needs to take place,” Peoples said.
City Councilwoman Karen Alexander asked everyone to provide contact information, noting that many did not attend previous meetings and the city needs to do a better job of spreading the word.
The design team and steering committee will come up with the final proposal, which will be presented to City Council.