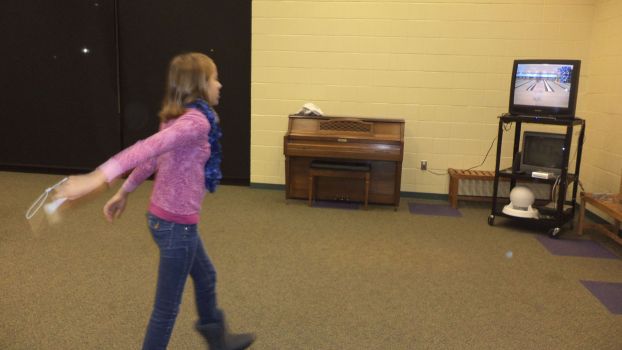 Yesterday’s low temperatures kept many indoors, but it didn’t deter a group of teens from trekking out to the Frank T. Tadlock South Rowan Regional Library for a night of Wii bowling. The library held a Wii bowling tournament as this month’s teen-focus program. From 5:30 to 7 p.m., local kids were invited to show up, hang out, and play games.
Rowan Public Library hosts a teen program each month. The events coordinator chooses an activity, and each branch hosts its own version on staggered dates throughout the month, Dara Cain, the children’s librarian at South Branch said. She’s in charge of the teen program for the Frank T. Tadlock South Rowan Regional Library, and she said she loves being a part of the events.
“It makes you feel like a kid again,” Cain said.
While the events are always fun, it’s hard to tell what the turnout will be, she said, because there’s no pre-registration. The kids just show up.
But a small attendance Tuesday didn’t stop the fun. Those who did show up played Wii bowling, competing for the prize of a giant Hershey’s chocolate bar. While waiting for a turn with the remote, the kids played board games, chatted, or munched on snacks provided by the library.
Adeline Watson, a seventh grader at Corrhier-Lipe Middle School, said her mom told her about the event. Watson thought it sounded like fun, and asked her cousin, Tori Watson, if she’d like to come. When Tori agreed, the two didn’t let anything, not even below-freezing temperatures, stop them.
Brother and sister Susan and Noah Lee also heard about the event from their mom, but unlike the Watsons, they were no stranger to the teen events. Noah said they’d been coming to the library’s public events for a long time.
Susan, a practiced Wii bowler, took home the prize. After the tournament finished, the kids moved on to other games. Cain said the relaxed atmosphere was typical of library events.
“You give them different things they can pick from and they do whatever they want to do,” Cain said.
The point, she believed, was to hang out and just have some fun.
The other branches of the Rowan Public Library have yet to host their own tournaments. East Branch will hold its tournament on January 27 from 5:30 to 7 p.m., and the headquarters in Salisbury will hold its own games January 28 from 5:30 to 7 p.m.