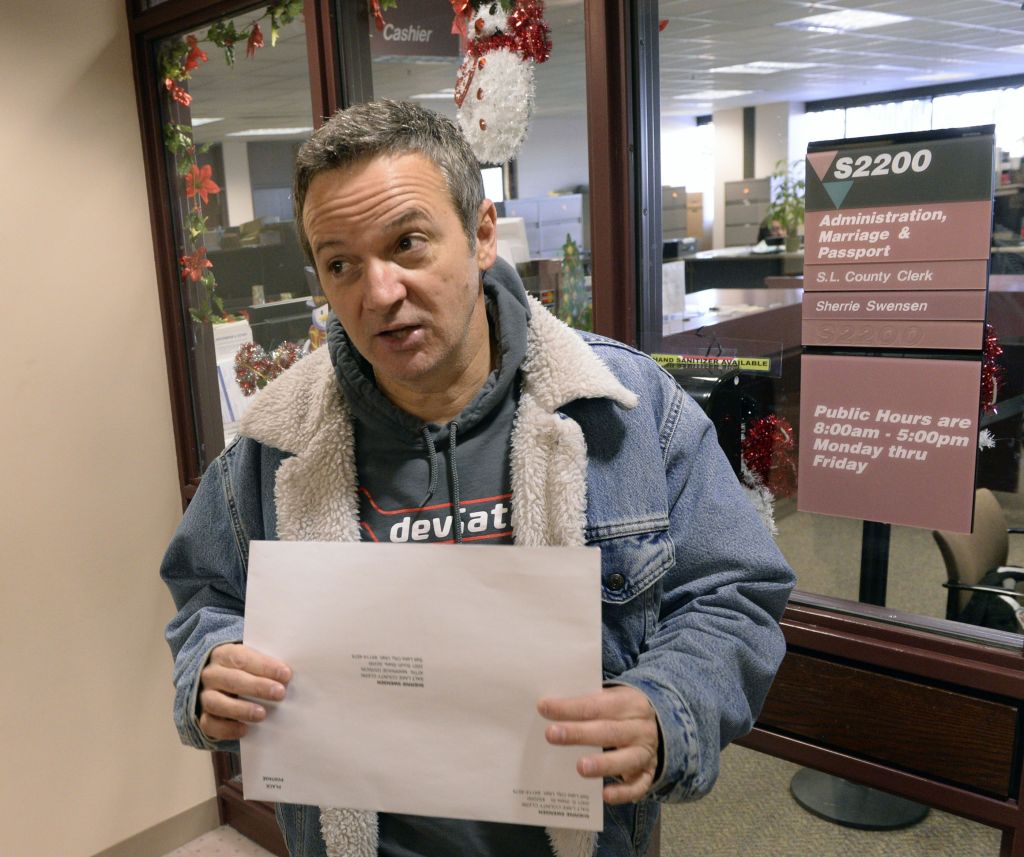 SALT LAKE CITY (AP) — Michael Mathie proposed to his partner Tyler McCraley on Christmas. The next day, they joined the historic rush of same-sex couples getting marriage licenses in Utah.
But unlike many couples who solemnized their vows in impromptu ceremonies in the lobby of county clerks offices, Mathie and McCraley decided to wait to hold a ceremony so Mathie’s two children could be involved. They were planning the ceremony this weekend.
But, they waited too long.
They are among dozens, maybe hundreds, of couples who missed out on their chance to be legally married in Utah.
The U.S. Supreme Court decided on Monday to bring a temporary halt to the marriages until the Denver-based 10th U.S. Circuit Court of Appeals considers the long-term question of whether gay couples have a right to wed in Utah.
That means couples who did not solemnize the marriage before the ruling won’t be considered legally married, Salt Lake County Clerk Sherrie Swensen said. A marriage license itself means nothing unless there is a ceremony with an officiator and two witnesses, she said.
“We were totally devastated,” McCraley said. “The biggest push for us to get married is to show the kids we were in this for the long haul. We definitely wanted them to be a part of it.”
County clerks have yet to tabulate how many same-sex couples who obtained licenses failed to make their unions official, but Megan Risbon of the Utah Pride Center estimates there be may a couple hundred people who fall into this category. More than 1,000 gay and lesbian couples took home marriage licenses in the past two weeks.
The uncertainty surrounding the marriages is emblematic of the confusion resonating throughout Utah after a two-week rush on gay marriages was brought to a sudden halt. Questions remain about taxes, adoptions and health insurance for the newly-married couples.
“The legal landscape is changing by the minute,” said attorney Laura Milliken Gray, who represents many same-sex couples. “We’re trying to figure out exactly what it means in an area where everything is unprecedented.”
On Wednesday, Gov. Gary Herbert issued guidance to state agencies instructing them not recognize same-sex marriages given out during the two weeks. But, he also said benefits obtained by the newlyweds during the two weeks should not be revoked.
For instance, if a couple changed their names on a driver’s license already, that license should not be revoked, Herbert said. But, since all the laws revert back to before the federal judge’s Dec. 20 ruling, couples trying to change their name now on a driver’s license will not be allowed to do so, he said.
McCraley, 32, said the last three weeks have triggered a roller coaster of emotions for him and other gay and lesbian couples. First was the joy and shock that a federal judge overturned Utah’s same-sex marriage ban. That was followed by the excitement of planning a wedding: renting tuxedos, getting flowers and having a friend open her house for the event.
Then came the disappointment Monday morning of finding out about the Supreme Court ruling that led to the cancellation of their wedding ceremony in which 50 people were going to attend. Now, they don’t know when, or if, they’ll ever get married in Utah.
“We’re just waiting to see what happens,” McCraley said. “We’re kind of just in that limbo stage.”
Phones at the Utah Pride Center have been ringing steadily the past two days with calls from couples stuck in the same situation at McCraley and Mathie, Risbon said.
Her organization and other gay marriage proponents made sure there were plenty of marriage officials at the county clerks offices in the days after the Dec. 20 ruling. Risbon said they were encouraging all the couples to finish the process right then and there, in case a court granted the state’s request for a halt.
But, some people needed or wanted more time, she said. Many were waiting to hold ceremonies until out-of-town family and friends could make it in. The family of one lesbian couple was driving from Colorado on Monday for a ceremony this week.
“It’s heartbreaking,” Risbon said. “These couples waited and now they just can’t.”
It’s unclear if county clerks will recognize marriages solemnized Monday, the same day the Supreme Court issued the ruling in the early morning. Swensen said they may have to try and determine what time of day the ceremonies were done to determine if they beat the Supreme Court’s ruling.
Swensen’s office experienced one of its busiest three-week stretches ever, issuing more than 1,000 marriage licenses in a nine-day period starting Dec. 20, compared to about 280 in the same period last year, she said.
Her staff is so backed up that they haven’t begun yet to record all the same-sex marriages. That’s why her office can’t provide the number of couples who got licenses but failed to do the necessary follow up.
Swensen feels for the couples who waited too long. She’s asking attorneys if she can refund the $40 fee to those couples.
“I feel like it’s unfair to keep their money,” Swensen said.