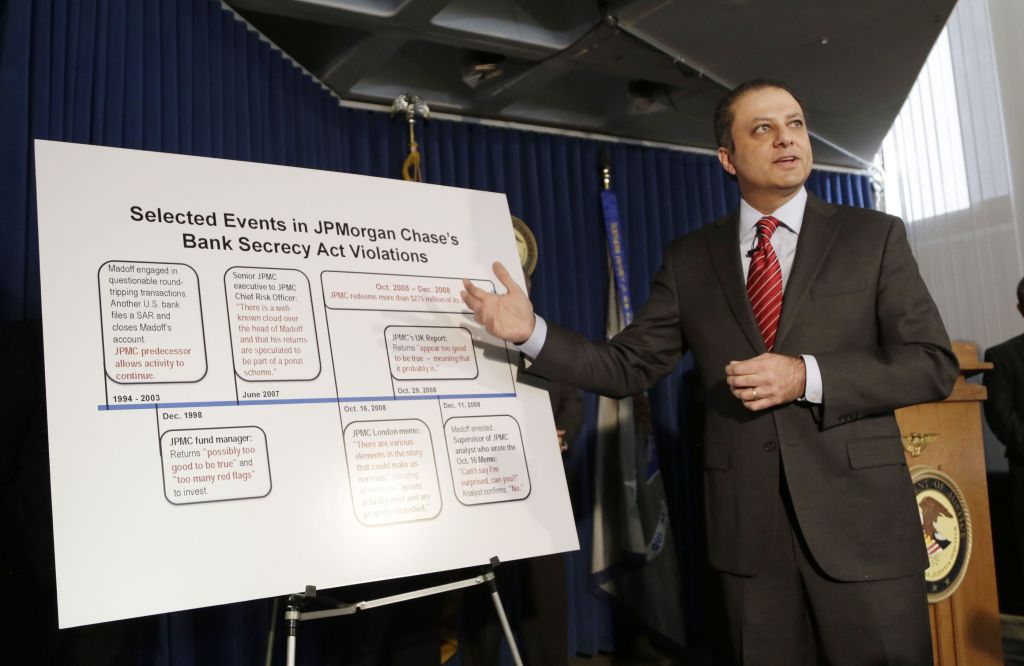 NEW YORK (AP) — For more than 15 years, there were signs something was amiss with what federal prosecutors in Manhattan call the “703 account” at JPMorgan Chase & Co.
Money was being transferred back and forth for no reason. The account holder was recording double-digit returns on investments that were too good to be true. The bank itself was worried enough about possible fraud to withdraw its own investments from him.
The name on the account was Bernard Madoff and on Tuesday, JPMorgan paid a steep price for keeping quiet about its suspicions.
Federal authorities announced that the nation’s largest bank will add to its other costly financial woes by forfeiting a record $1.7 billion to settle criminal charges alleging it turned a blind eye to the Madoff fraud, plus pay an additional $543 million to settle civil claims by victims. It also will pay a $350 million civil penalty for what the Treasury Department called “critical and widespread deficiencies” in its programs to prevent money laundering and other suspicious activity.
The bank failed to carry out its legal obligations to guard against money laundering while Madoff “built his massive house of cards,” George Venizelos, head of the FBI’s New York office, said at a news conference.
Madoff banked at JPMorgan through what court papers referred to as the “703 account.” In 2008, the bank’s London desk circulated a memo describing JPMorgan’s inability to validate his trading activity or custody of assets and his “odd choice” of a one-man accounting firm, the government said.
In late October 2008, it filed a suspicious activity report with British officials. In the weeks that followed, JPMorgan withdrew about $300 million of its own money from Madoff feeder funds. The fraud was revealed when Madoff was arrested in December 2008.
“Despite all these alarm bells, JPMorgan never closed or even seriously questioned Madoff’s Ponzi-enabling 703 account,” U.S. Attorney Preet Bharara said. “On the other hand, when it came to its own money, JPMorgan knew how to connect the dots and take action to protect itself against risk.”
In a statement, JPMorgan said it recognized it “could have done a better job pulling together various pieces of information and concerns about Madoff from different parts of the bank over time.”
It added: “We do not believe that any JPMorgan Chase employee knowingly assisted Madoff’s Ponzi scheme.”
Prosecutors called the $1.7 billion the largest forfeiture by a U.S. bank and the largest Department of Justice penalty for a Bank Secrecy Act violation.
The settlement includes a so-called deferred prosecution agreement that requires the bank to acknowledge failures in its protections against money laundering but also allows it to avoid criminal charges. No individual executives were accused of wrongdoing.
The agreement resolves two felony violations of the Bank Secrecy Act in connection with the bank’s relationship with Bernard L. Madoff Investment Securities, the private investment arm of Madoff’s former business. The civil penalty was imposed by the Treasury Department’s Office of the Comptroller of the Currency.
Criminal charges will be deferred for two years as JPMorgan admits to its conduct, pays the $1.7 billion to a fund established for victims of Madoff’s fraud and reforms its anti-money laundering policies, prosecutors said.
A statement of facts included in the agreement describes internal communications at JPMorgan expressing concerns about how Madoff was generating his purported returns. As early as 1998, a JPMorgan fund manager wrote that the returns were “possibly too good to be true” and there were “too many red flags.”
In more recent years, executives were disturbed by the fact that Madoff wouldn’t let the bank examine his books, the statement of facts says.
“How much do we have in Madoff at the moment?” a bank analyst wrote in a 2008 email. “To be honest, the more I think about it, the more concerned I am.”
When Madoff finally revealed to the FBI that his investment advisory business was a Ponzi scheme, fictitious account statements for thousands of clients showed $60 billion in assets. Of the roughly $17.5 billion in principal that was real, most of it was gone.
Since then, a court-appointed trustee has recovered more than $9.78 billion — including a portion of the JPMorgan civil payout — to redistribute to clients that invested directly with Madoff. The $1.7 billion criminal forfeiture will go to a second victims’ pool, already with $2.35 billion, that is processing claims from clients of so-called feeder funds that also invested heavily with Madoff.
The JPMorgan settlement is the latest in a series of major deals it has made to resolve its legal troubles. In November, the bank agreed to pay $13 billion over risky mortgage securities it sold before the financial crisis — the largest settlement to date between the Justice Department and a corporation.
The more than $2.5 billion that JPMorgan is paying comes from a company that reported $21.3 billion in net income for 2012. JPMorgan already has set aside $23 billion this year to cover settlement and litigation costs — including the $13 billion.
The settlement of criminal charges “is good, but still inadequate to stop what can only be called a one-bank crime spree,” said Dennis Kelleher, president of Better Markets, a group that advocates strict financial regulation.
“Once again, not a single individual working for JPMorgan Chase has been held accountable. Banks do not commit crimes; bankers do,” Kelleher said in a statement. “Until individuals, including executives, are held personally liable, fined and jailed, the crime spree will continue.”
Asked why no individual bankers were charged, Bharara said the settlement was the best option under the law.
“Obviously, the statement of facts recites in great detail some of the roles that various individuals played with the overall systemic failure,” he said. “But in the interest of justice, you’ve got to look at every case individually and our view was at this point the obvious charge was against the bank. … This is a statute directed against institutional failure and institutional deterrence and that’s why it was brought the way it was today.”