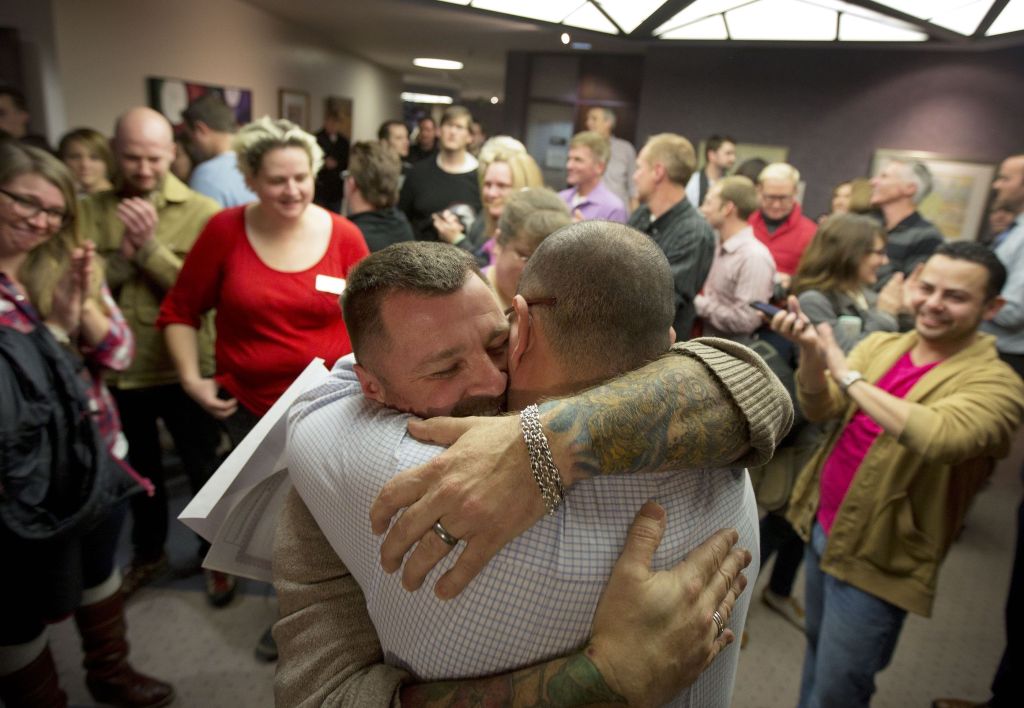 SALT LAKE CITY (AP) — Gay couples in Utah were thrown into legal limbo Monday as the U.S. Supreme Court put a halt to same-sex marriages in the state, turning jubilation to doubt just weeks after a judge’s ruling sent more than a thousand couples rushing to get married.
The justices did not rule on the merits of the case or on same-sex marriage bans in general, leaving both sides confident they’ll ultimately win. The decision stays in effect while the Denver-based 10th U.S. Circuit Court of Appeals considers the long-term question of whether gay couples have a right to wed in Utah.
For those couples who just got married — or were planning their nuptials — the latest twist in the legal battle clouds what was seen as a cause for celebration.
“It feels like we are second-class citizens during the stay,” said Moudi Sbeity, who is waiting to get married until the legal process plays out. “There’s also the fear of the unknown of what might come next.”
Sbeity and partner Derek Kitchen are among three couples who brought the Utah lawsuit that led to the surprise Dec. 20 ruling by U.S. District Judge Robert Shelby, who said the state’s ban on same-sex marriage violated gay and lesbian couples’ constitutional rights.
State officials praised Monday’s decision to put a hold on things, saying it should have come earlier. Two previous courts turned down their request for a stay.
“Clearly, the stay should have been granted with the original District Court decision in order to have avoided the uncertainty created by this unprecedented change,” Gov. Gary Herbert said.
The Supreme Court’s unsigned order did not indicate anyone dissented from the decision to halt same-sex marriages in Utah. Justice Sonia Sotomayor, who handles emergency appeals from Utah and the five other states in the 10th Circuit, turned the matter over to the entire court.
Many believe the Supreme Court will settle the issue for good. Utah Attorney General Sean Reyes said the court’s decision indicates an interest in Utah’s case, and he hopes the justices issue a final answer.
Others doubt the high court will step in any time soon. In June, the justices decided not to weigh in on the constitutionality of defining marriage as being between a man and woman, relying instead on a technical legal argument to resolve the issue in California and clear the way for same-sex marriage in the state.
The ruling Monday doesn’t necessarily give any indication of how the justices would rule on the issue, said Douglas NeJaime, a professor of law at the University of California, Irvine. He believes justices want the issue to work its way through normal legal channels before they weigh in.
Meanwhile, the state is trying to determine whether the marriages that have already taken place are still valid
Marriage licenses issued in 2008 in California prior to the passage of the state’s same-sex marriage ban were eventually upheld by the state supreme court. But marriages licenses issued in San Francisco in 2004 after mayor Gavin Newsom told city officials to grant them were later invalidated by the state supreme court.
That leads NeJaime to believe a court will need to rule on Utah’s marriages. If the Utah attorney general challenges the validity of the licenses as expected, that might lead to several months of limbo for the couples, he said.
Jon Davidson, director of Lambda Legal, which pursues litigation on LGBT issues nationwide, said Utah may choose not to recognize the marriages in the interim, but predicted the federal government and other states will honor them since they were granted in accordance with the law at the time.
For 17 days, Utah was the 18th state to allow gay couples to wed.
More than a thousand couples flocked to county clerks offices, marrying on courthouse steps in darkness and celebrating a judge’s decision that the 2004 voter-approved ban on same-sex marriage in the state was unconstitutional.
It was a surprising development in a state where nearly two-thirds of the 2.8 million residents are members of The Church of Jesus Christ of Latter-day Saints, and Mormons dominate the state’s legal and political circles. Though the church has softened its stance toward gays and lesbians in recent years, it still teaches that homosexual activity is a sin and stands by its support for “traditional marriage.”
Shelby’s ruling overturning the state’s ban was the first by a federal judge to overturn a state marriage ban since the U.S. Supreme Court issued two decisions on same-sex marriage in June.
The justices at that time struck down a provision of the federal Defense of Marriage Act that prevented legally married gay and lesbian couples from receiving a range of tax, health, pension and other federal benefits.
On the same day, the court left in place a trial court’s decision that struck down California’s constitutional ban on same-sex marriage.
The action now shifts to Denver, where the appeals court will consider arguments from the state against same-sex marriage as well as from the three gay and lesbian couples who challenged the ban in support of Shelby’s ruling.
The 10th Circuit has set short deadlines for both sides to file their written arguments, with the state’s first brief due on January 27. No date for argument has been set yet.
Many of couples who have already tied the knot are choosing to move forward as planned, optimistic the ruling will be upheld by the appeals court. Alan Britton and his husband, Nathan London, have already updated their health insurance to show they are married and plan on filing taxes jointly. They are planning a wedding celebration in the next month.
“It makes me uncomfortable,” said Britton about not knowing how things will turn out, “but it’s not going to change the way I feel about my husband.”