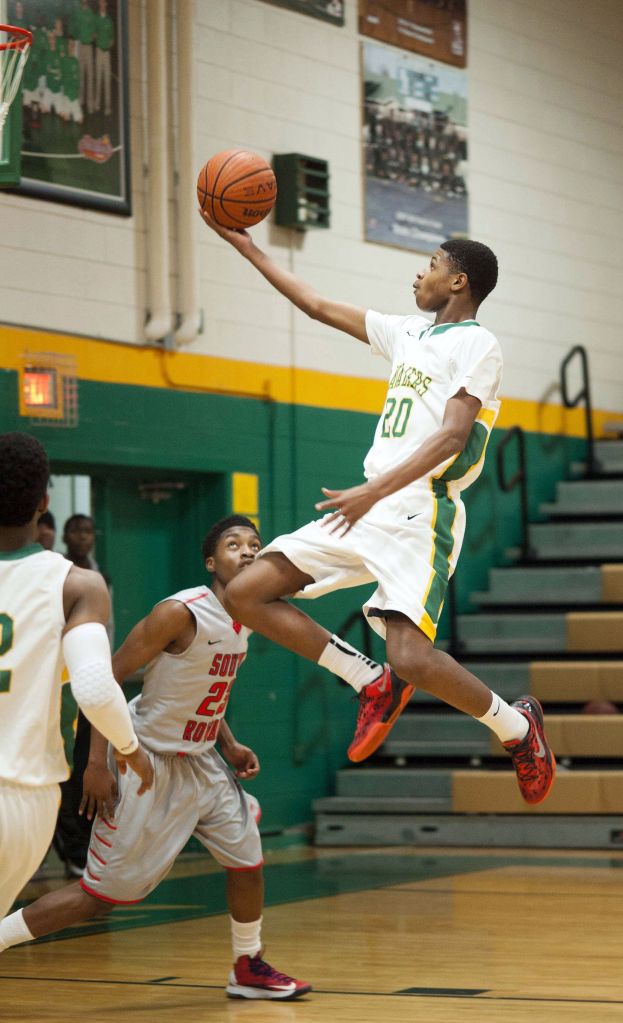 SPENCER — South Rowan’s Bryan Withers signed up to coach basketball, but his job description so far this season basically has been amusement-park operator.
The roller-coaster ride continues for the Raiders, who played well in a league road win at Hickory Ridge on Friday but were very shaky in a 76-46 non-conference loss at North Rowan on Monday.
And this was a North team minus high-flying Michael Connor and big guy Dalton Nelson. It also was a North team that got only a cameo appearance from Sam Moir Christmas Classic MVP Michael Bowman.
South’s 5-8 season to date has been win two, lose five, win two, lose two, win one and now lose another one. Roller coaster.
“We’re just not a mentally tough team, and that’s because I haven’t demanded enough,” Withers said. “There was nothing I could do or say tonight that would change our effort. North was tougher mentally and physically than we were and North was hungrier than we were.”
North (7-2) had a lot to do with South’s struggles. The Cavaliers were focused offensively and defensively and got a career game from sophomore Josh Handy, who scored 24 points in three quarters.
“We’ve told Josh that sometimes he’s just standing and watching the game, but tonight he was flying around on the offensive boards,” North coach Andrew Mitchell said. “He can be an energy guy and when he knocked down that first shot, he was off to a big night. He’s long, he’s rangy, and he’s talented. He can be the man one day.”
Jalen Sanders, another soph, was super, as usual, and scored 20 for the Cavs.
“I got off to that good start and I felt it tonight,” Handy said. “We just took it to ‘em. With our seniors out, Jalen and I had to step up. We were the dynamic duo.”
North was shorthanded.
Connor, who scored a career-best 27 on Friday, sat out the first game of a four-game suspension stemming from his ejection at Winston-Salem Prep on Saturday. That incident was written up as a “fighting ejection” by officials. That’s why the penalty is so harsh.
Bowman got a technical foul Saturday, so Mitchell decided to sit him for the first half against South. North led by 24 when Bowman reported to the scorer’s table in the third quarter.
Nelson, North’s tallest player, missed the game due to a stomach illness.
“We stayed with North at the Christmas tournament,” Withers said. “So when our kids heard Connor was going to be out tonight, they felt good about this one.”
That optimism wasn’t justified. Lavon Hill scored 19 points, but the Raiders were never in it.
In Mitchell’s four seasons at North, the Cavaliers have lost back-to-back games only twice. They had no intention of losing to South and settled things early. Handy and Sanders teamed for 21 in a blistering first quarter, and North led 25-7.
North had a lull that allowed South to climb back to a 33-20 deficit at halftime, but North’s 11-0 run to open the second half — Handy, Sanders and Shareef Walker did the damage — essentially ended the game.
“We beat South with a 1-3-1 in the Christmas tournament, but we knew they would be ready for that,” Mitchell said. “We did a good job in the first half with a sagging man-to-man and we didn’t let their guards drive by. Then we went to the 1-3-1 and jumped on them to start the second half. They went seven or eight possessions without scoring.”
Mostly this game testified to how deep North is.
“We’ve got a lot of guys who can play and a lot of guys who work hard every day in practice,” Mitchell said. “If you keep working, your time will come, and tonight was that time to shine for some of our guys.”
SOUTH ROWAN (46) — Hill 19, Rhyne 7, Wilder 6, Spry 5, Holbrook 5, Graham-Wesley 3, Goldston 1, Stewart, Rary, Childers, Finger.
NORTH ROWAN (76) — Handy 24, Sanders 20, Tatum 7, Bowman 6, Walker 6, Archie 5, Hillie 5, Scott 3, Billingsley, Mungin, Bates .
S. Rowan 7 13 6 20 — 46
N. Rowan 25 8 29 14 — 76