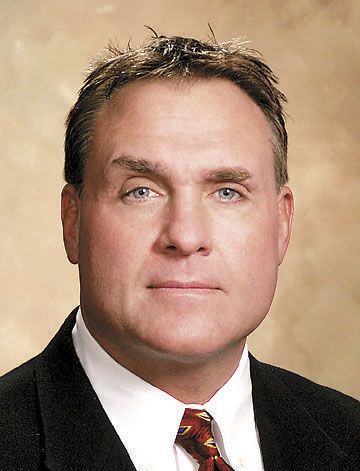 SALISBURY — County leaders voted 3-2 to offer a $6.5 million loan for a new central office building in the 500-block of North Main Street on Monday.

The decision, which split a counteroffer from the school system and only addressed the longtime central office dispute, sends the ball back into the school board’s court. The school board is slated to meet Thursday to discuss the commissioners’ action.

School board members, the schools’ attorney, county commissioner candidates and other interested parties waited more than two hours for county officials to emerge from closed session to give the decision Monday. Video of Monday’s available on the county’s website.

Vice Chairman Craig Pierce motioned for the allocation — which provides $500,000 more than a commitment commissioners made in 2012. The funds would be provided as long as the school board builds at the North Main Street site and obtains land and parking at equal to or less than a fair market value cost.

Pierce, and Commissioners Caskey and Chad Mitchell approved the measure.

Pierce addressed the other components of the schools’ counteroffer by asking to form a new committee.

“We would like to form a Capital Improvements Committee to assess a timeline and funding revenues for the final cost of other proposed investments,” Pierce said. “All this is with the understanding that the funding must be approved by the (Local Government Commission).”

At the end of the discussion, Sides said he wouldn’t vote for the measure because he estimated the total cost of the project — with land acquisition and other planning costs — to reach up to $9 million in taxpayer dollars.

On the other hand, Barber criticized board members of not honoring the former board’s $6 million commitment and wasting what he said was $1 million in taxpayer money — between roughly $500,000 in legal fees and the Pierce’s added proposal amount.

“My vote was not a vote against the schools, it was a vote against how the current board of commissioners conduct business and that we should honor the commitment of previous boards,” Barber said after the meeting.

But Pierce fired back with his views on the commitment and a different take on the property that he questioned only days earlier.

“To address Commissioner Barber’s assumption that we did not honor what the other board said they would do, they had their opportunity before I was sworn in to make that vote. They chose not to make it. They chose to leave it up to the new members which was myself and Commissioner Caskey and we had campaigned on the issue that we would not vote for the central office downtown at 329 South Main and that’s exactly how we voted,” Pierce said. “I don’t feel like I haven’t lived up to my commitment. I made a commitment and I lived up to it.”

When asked about his thoughts on the North Main Street site this week, Pierce told the Post the proposed locations had a lot of questions surrounding the financing — which private developers were offering money and if the city of Salisbury would still provide funds — and parking for employees and visitors.

But Pierce gave the location a resounding endorsement Monday.

“The site that’s now being chosen I think is an excellent site,” he said. “It offers a completely different perspective from what we had at 329 South Main. That’s why I have no problems going to $6.5 million to make that building happen. I think it was going to go in the downtown location. I think that’s the only place is should have went in to start with.”

School Superintendent Lynn Moody said she was pleased with commissioners’ decision to discuss it Monday, but said the final say lies with the school board.

“I’m pleased that they discussed it tonight — put it on their agenda and discussed it tonight — I hope that this is really moving us in the right direction. I’m very hopeful,” Moody said. “We have a board meeting Thursday morning to discuss next steps, so it’s really up to the board with how we go from here with what they have voted on tonight.”

Pierce and Sides, along with Moody and School Board Chairman Richard Miller met on Dec. 20 to discuss the schools’ latest offer to the county board.

“As Chairman Sides said there is a lot of different discussion going on both individually by phone and in meetings and school board members are working hard with commissioners to try to present something through our attorneys to try to get to this point,” Moody said. “Everybody was working diligently to try to find a resolution.”

Mitchell said he supported Monday’s proposal and wanted to move past the ongoing central office debate. He added he hopes to move on to a joint meeting with the schools to discuss the requested capital needs.

“We all know that the central office is not the only one that the system has a need of resolution on,” Mitchell said.

“I support that site. I think it’s a good site. I understand all the positives there,” Caskey said. “I think it’s time we went ahead and got this behind us after 20 some years.”