Cavaliers bounce back against South 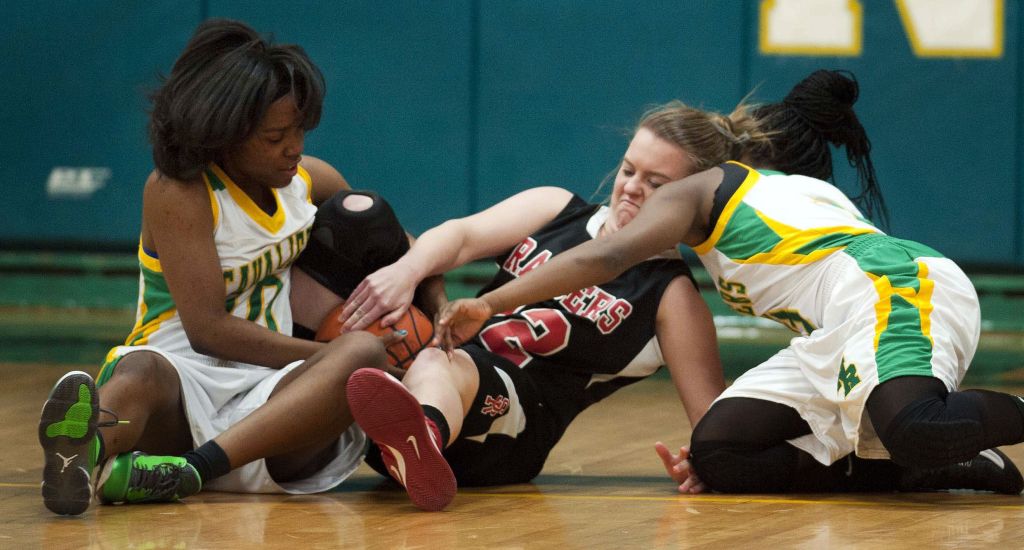 SPENCER — Between them. North Rowan’s Brielle Blaire and South Rowan’s Avery Locklear have accounted for 2,718 high school points.
North is in the early stages of playing without Blaire, who was hurt Friday — coach Brian Lytton is optimistic her absence will be short-term — while South has had a couple of weeks to adjust to playing without Locklear.
The result was a closer-than-expected contest on Monday. North pulled away in the fourth quarter on its home floor and won 55-38.
“I don’t think anyone expected it to be that close,” South coach Jarrod Smith said. “But we’re getting better. The last three minutes of the first half really hurt us and they had a spurt in the third quarter, but most of the night it was pretty even. We had our chances.”
Nycieko Dixon scored 18 points for the Cavaliers (9-1). Demeria Robinson put in 15, and Special Washington added 12.
Cassidy Chipman led South with 15 points, and Lynsey Corriher scored 13.
“South did a very nice job defensively in their zone,” North coach Brian Lytton said. “They were hanging in and hanging in, and I never really felt comfortable until late in the fourth quarter.”
North was coming off its first loss of the season on Saturday at Winston-Salem Prep. Obviously, the Cavaliers missed Blaire in that one, but failing to make layups was the lethal problem.
“We missed 19 layups Saturday,” Lytton said. “We missed some more tonight but not nearly as many.”
Sam Moir Christmas Classic MVP Dixon and Aliyah Farmer, who normally start, didn’t start, and their absence probably helped South (5-7) build some confidence early. Farmer and Dixon entered the action late in the first quarter.
Chipman scored seven in that opening quarter, and South trailed 12-11 at the end of it.
North’s lead was still only 19-16 late in the second quarter, but Ashley Blaire made a free throw, Dixon, a 1,000-point scorer who can get on a roll in a hurry, buried a 3-pointer, and Washington made a steal and passed ahead to Dixon for a layup to push the lead to nine points.
Chipman got two back for the Raiders on a tough drive, and North led 25-18 at the break.
“I didn’t think we rebounded very well in that first half, but in the second half we cleaned things up a lot on the boards,” Smith said. “We also got a lot of help from our bench. Those girls came in and did their jobs when people needed a break.”
North’s lead was down to 25-22 after Chipman hit a 3-pointer, but Washington answered with a 3 of her own.
“South did good,” Washington said. “They surprised us some with how well they shot the ball and how well they worked against the press, but we played good too. We played as a team.”
Washington’s 3-pointer triggered one of North’s best flurries. Washington, Dixon and Robinson got North’s running game going. It was 36-25 by the end of the third.
“We were able to force their dribbler to the sideline, trap her and get some steals and quick, easy baskets,” Robinson said.
North opened the final quarter with an easy transition bucket — Robinson fed Washington off a steal — and then Robinson swished a 3-pointer for a 16-point lead. That’s when Lytton could finally breathe easily.
“I don’t think I personally played very well because I was sick, but the team did well,” Robinson. “We’ve played very good games with Brielle, but we can still play good ones until she comes back. The biggest thing playing without Brielle is that everyone has to rebound more.”
Without Blaire, North is a small team, and Corriher and Chipman both had double-digit rebounds for South.
South has lost six in a row, but Locklear should be back by the end of the month from a broken hand and her teammates have grown up some in her absence.
“Avery is a major scorer, a great rebounder and a great defender — she just does everything,” South junior Kayla McLendon said. “With her being out, we’ve all needed each other more. We’ve all tried to step up to help the team and we’re getting better.”
SOUTH ROWAN (38) — Chipman 15, Corriher 13, McLendon 3, Stamey 3, Martin 2, Figueroa 2, Waters, Bost, Smith.
NORTH ROWAN (55) — Dixon 18, Robinson 15, Washington 12, Farmer 5, A. Blaire 3, White 2, Lingle, Cannon, Royer, Liles.
S. Rowan 11 7 7 13 — 38
N. Rowan 12 13 11 19 — 55