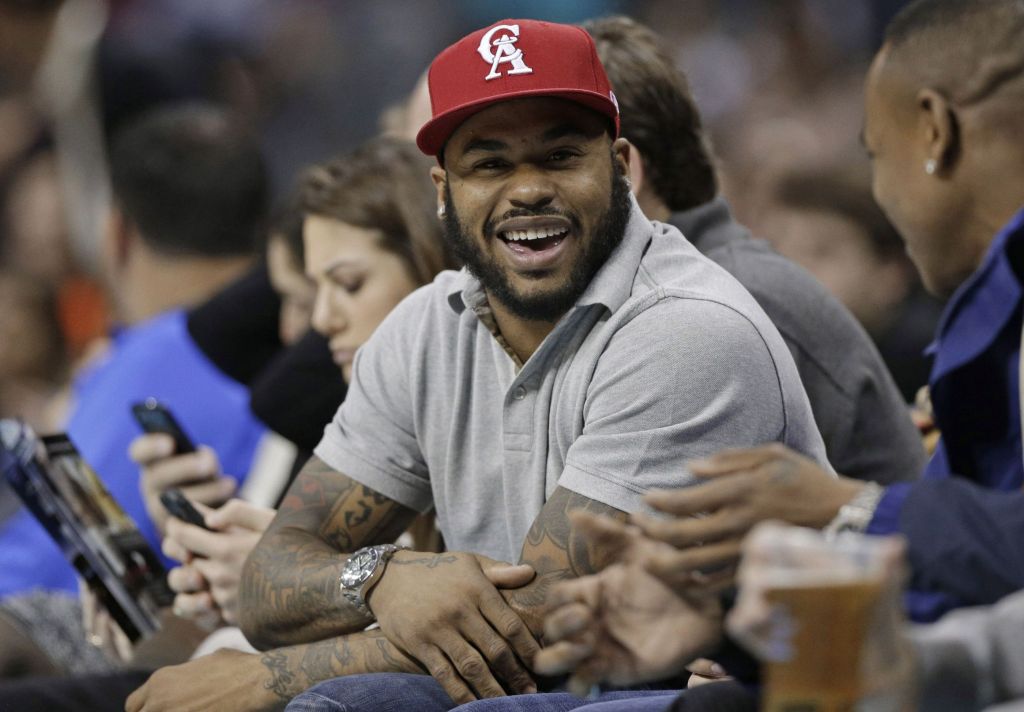 Associated Press
The NFL notebook…
CHARLOTTE — Panthers wide receiver Steve Smith says he’ll play Sunday against the San Francisco 49ers in the NFC divisional playoffs.
What he can’t predict is how his sprained left knee will feel during the game.
Smith said Monday “it’s not about can I go. It’s about how confident do I feel when I am going. I will play Sunday. But it’s about how much I don’t worry about the knee — and that’s when the confidence increases.”
The 34-year-old Smith says the knee “felt good” after doing some cutting during a light practice Monday. He’s expected to test it out more thoroughly Wednesday.
Smith, Carolina’s all-time leading in touchdowns, sprained his posterior cruciate ligament in Carolina’s Week 16 win over New Orleans and sat out the regular season finale against Atlanta.
BRONCOS REMEMBER CHARGERS
ENGLEWOOD, Colo. — Forget the Ravens.
Remember the Chargers.
Kickoff in the Broncos’ AFC Divisional round game this weekend comes exactly a year after Jacoby Jones’ 70-yard last-gasp touchdown catch sparked Baltimore’s upset of Denver in double-overtime.
But the Broncos don’t have to go all the way back to their playoff pratfall against Baltimore for inspiration when they host San Diego on Sunday.
The Broncos, again the AFC’s top seed after another 13-3 regular season, can draw plenty of motivation from their latest slip-up just a month ago, when the Chargers (10-7) handed them their only home loss of the season, 27-20.
“We beat the Ravens in the opener, so we checked that one off our list already,” defensive end Malik Jackson said Monday. “Now, we need to check the Chargers off our list.”
SEAHAWKS DON’T EXPECT EASY WIN
RENTON, Wash. — Before Pete Carroll turns his full attention to Seattle’s playoff opponent, he’ll make sure the Seahawks aren’t expecting another easy win against New Orleans like in Week 13.
“We learned and gained information in the game as they did, but we start all over again and start from scratch,” Carroll said Monday. “We take a look at what happened since we played them. But I think it would be a mistake to try and call it because of what has happened in the past. We don’t care about that.”
Carroll and the Seahawks will face New Orleans on Saturday in the second round of the playoffs less than six weeks after Seattle routed the Saints 34-7 in early December. That win proved significant for Seattle in wrapping up home-field advantage in the NFC and dropping New Orleans in a wild-card position and on the road throughout the playoffs.
COLTS SIGN BRANCH
INDIANAPOLIS — The Colts signed former Super Bowl MVP Deion Branch six days before playing his ex-team in the divisional round.
The 5-foot-9, 195-pound Branch caught 518 passes for 6,644 yards and 39 TDs over a career spent mostly with the New England Patriots. Branch also has 64 receptions for 948 yards and four TDs in 17 postseason games.
PACKERS REFLECT
GREEN BAY, Wis. — Wearing his familiar knit cap and a blue San Jose State sweatshirt, Packers receiver James Jones looked like he was ready to escape the bitter cold and take the first flight back home to the West Coast.
He will take a month or so to decompress with family before starting to think about football again. But with free agency looming, there’s no guarantee the veteran wideout will be back in Green Bay.
The 23-20 loss Sunday to the San Francisco 49ers in an NFC wild-card game started the painful but familiar process Monday for players of saying goodbyes, looking forward to rest and wondering which teammates would be back next fall.
“You know what, to be honest with you, I’m not even worried about it. I’m at peace. I’m just chilling,” Jones said.
WILD CARD RATINGS
NEW YORK — The New Orleans Saints’ 26-24 win against the Philadelphia Eagles was the most-watched Saturday wild-card game on NBC with 34.4 million viewers. The Indianapolis Colts’ 45-44 win over the Kansas City Chiefs had 27.6 million viewers.
NBC said Monday the average of 30.8 million viewers for the two games was an increase of 14 percent from last year’s weekend.
On CBS, the San Diego-Cincinnati game was seen by 30.9 million, the highest viewership in 19 years for an early AFC wild-card game.