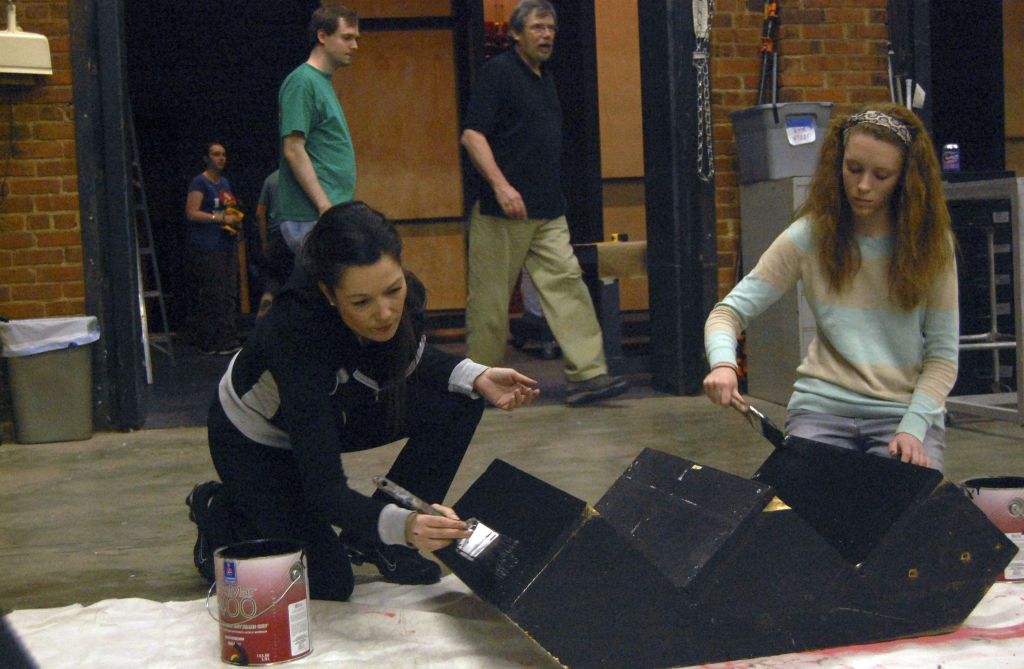 In two days, the majority of the cast, who will be featured in next month’s Piedmont Players production of the Count of Monte Cristo, have built and painted what will be the set for the February play.
All of the pieces for the play, which will be shown at the Meroney Theater, including a piano, staircase and other props, are made from scratch.
“Most people don’t realize this stuff gets built from scratch. It is letting people know this is why we are here,” said Director/Designer Reid Leonard.
“Everything for these shows is built here,” said Marketing Director Josh Wainwright.
Caroline Clark, 10, who has performed in a couple of productions in the Norvell Theater just around the corner, has helped taken down sets after other productions. However, this is the first time she’s helped build a set. Clark spent most of her time painting what would be turned into stairs and walls. All of the stairs and other props are designed to be rolled back and forth onto the stage. There are 38 scenes in the play and much of the set will be built with movable parts.
“I like building. It’s pretty fun being here surrounded by everything,” Caroline said.
It was the first time helping build a set for Zoe Watson, 13, who has also been in a few plays at the Norvell. Zoe said she’s learned about building throughout these past few days.
“It’s fun. I enjoy it. It’s a good experience,” said 10-year-old Keeley Watson, Zoe’s sister.
The girl’s mother, Amber, who has a role in the play, is also acting for the first time on stage.
“Salisbury is so lucky to have community theater for adults and children. To be able to take ownership of stage and sets is a unique opportunity,” Amber Watson said.
Alison Bird encouraged others to participate, even those who have no building experience. She said there are no specific skills required to help build the props.
“I can’t imagine not being apart of it,” Bird said.
She also has a role in the play and will act alongside her son, Cody Veros, for the first time. Bird has been with Piedmont Players since 2006, she said.
“It’s amazing from just a little bit of wood and screws it will become this big set,” said Madison Barrier, who is the stage manager for the play.
The show dates are — Feb. 13-15, Feb. 19-22 at 7:30 p.m. with a Sunday matinee on Feb. 16 at 2:30 p.m.
Volunteers will return Jan. 11 from 10 a.m.-5 p.m. to continue building the set.
For more information about the upcoming production or to volunteer, visit www. piedmontplayers.com or call 704-633-5471.