My Turn by Ralph Baker: The best solution for school office? 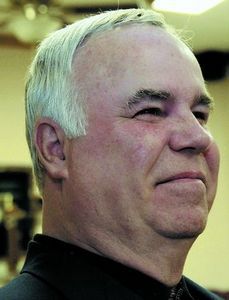 About six weeks ago, I wrote a letter to the school board, county commissioners, Salisbury mayor and city council suggesting that the Salisbury Mall property — which the county had announced it would buy — be used for the new school administration building. The reason was strictly because I thought it would be more economical for the city, county and the taxpayers to split the price and the occupancy, along with splitting the parking lot.
I don’t think my suggestion was received by any of these local officials, as they had their own ideas for the future. In fact, a dear lady friend of mine for over 50 years saw me at Food Lion and told me that she totally disagreed with my article. I hugged her neck and told her not to feel bad because very few people agree with me!
Actually, I had 53 people who called to agree, and a few agreed in the Salisbury Post. However, I completely admit that none of us private citizens has all the facts to make an informed decision, while those facts are available to members of the boards.
To the point of this article, the recommendation that the school administration building be built on the 500 block of North Main Street (at the former J&M Florist site) is absolutely fabulous, and I bet it would suit 90-95 percent of all Rowan County. All the positives are too numerous to mention, but a few are:

• It would create a North Main Street anchor.
• It’s within walking distance of most everything — restaurants, other government offices, county building etc. It would put some pedestrian traffic on the north end of the city.
• A very safe area for employees and visitors.
• Local contractor owns property and could build office (more jobs).
• Could use our local architects.

Talk about a plus for the city of Salisbury! We have the new Integro building (which is astonishing beautiful and humongous) on South Main Street, and if the school administration building were built at 500 North Main, just think how much prettier Salisbury would be to out-of-towners. And besides being pretty, it would show Salisbury/Rowan to be very proactive. Of course, we would need Duke Power to rid us of the telephone/electric lines and put everything underground.
As I stated above, none of us knows all the boards know, but to this point, this location seems to be the best for everyone, including all three boards.
What I think all we citizens should do is to voice our comments (good and bad) to the Salisbury Post and let the elected officials know what we think. After all, we voted for them and put them in office to represent us, not themselves. I have friends on all three boards, and I feel that they all are doing their best to represent their constituents. Obviously it is virtually impossible to please everyone, but I do think all three boards think their way is the “right way.” If the officials don’t hear from us, how do they know whether we agree or disagree?
All of us have opinions. Send your letters to the Post (letters@salisburypost.com), and let our officials know how we feel. Who knows? Maybe one of us will come up with an idea or opinion that may be much better than anyone else had even thought about. The Post is fair and prints letters whether they are pro or con.
I had never even considered the 500 North Main location until just recently, but it does seem to be a perfect solution to win the approval of all three boards. Frankly, I am very pleased and proud of all our local elected officials; they work tirelessly for us and get very little gratitude.
How do you feel about this location?
Ralph Baker lives in Salisbury and is the owner of Baker Shoes.
“My Turn” submissions should be between 500 and 700 words. Send to cverner@salisburypost.com with “My Turn” in the subject line. Include name, address, phone number and a digital photo of yourself if possible.