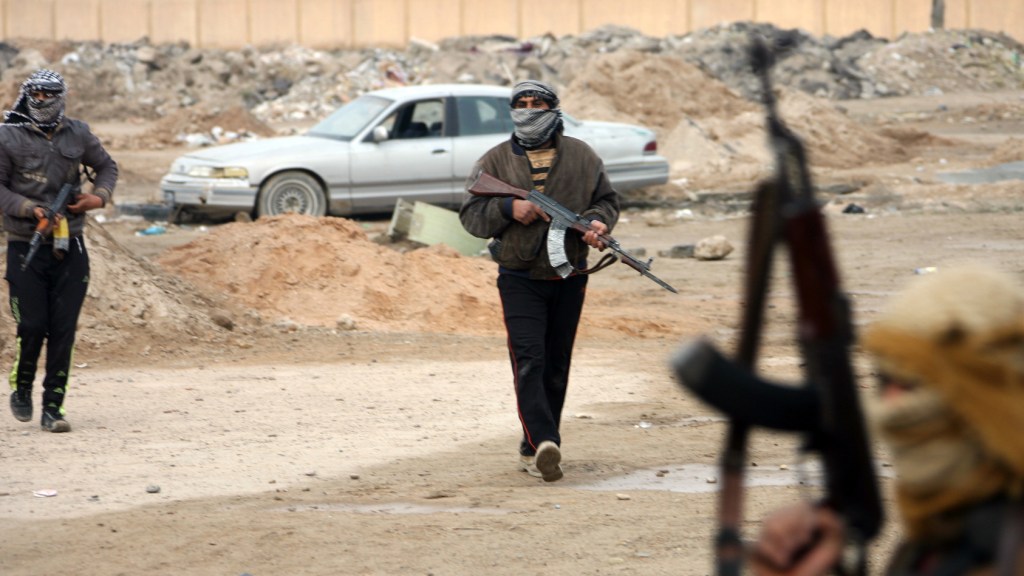 BAGHDAD (AP) — The Iraqi military tried to dislodge al-Qaida militants in Sunni-dominated Anbar province Sunday, unleashing airstrikes and besieging the regional capital in fighting that killed at least 34 people, officials said. A series of bombs in Shiite neighborhoods of Baghdad, meanwhile, killed at least 20 people.
The recent gains by the insurgents have been a blow to the Shiite-led government — as sectarian violence has escalated since the U.S. withdrawal. U.S. Secretary of State John Kerry said Washington was “very, very concerned” by the fighting but would not send in American troops.
Video of the airstrikes in Anbar — apparently taken by aircraft at night — was released by Iraq’s Defense Ministry showing al-Qaida hideouts being bombarded. It showed men gathered around a vehicle, then running away as the site was struck.
A ministry statement said the air force struck a militants’ hideout overnight, identifying them as belonging to the al-Qaida-linked Islamic State in Iraq and the Levant, which the government refers to as “terrorists.”
The army and allied tribesmen also fought al-Qaida militants around the provincial capital of Ramadi on Sunday, two Anbar government officials told The Associated Press by telephone. They said 22 soldiers and 12 civilians were killed, along with an unknown number of militants, and 58 people were wounded. The officials spoke on condition of anonymity because they were not authorized to brief reporters.
Clans inside the city of Fallujah have started to form brigades, they said, and some of the factions who fought the Americans following the U.S.-led invasion a decade ago say they do not want the Iraqi army to enter the city. There was no fighting inside the city on Sunday.
Government troops, backed by Sunni tribesmen who oppose al-Qaida, have encircled Fallujah for several days, and have entered parts of Ramadi. On Friday, troops bombarded militant positions outside Fallujah with artillery, a military official said, speaking on condition of anonymity as he was not authorized to release information.
The deadliest attack Sunday in Baghdad took place in the northern Shiite Shaab neighborhood, where two car bombs exploded simultaneously near a restaurant and a tea house. Officials say those blasts killed 10 people and wounded 26.
Authorities said a car bomb ripped through the capital’s eastern Shiite district of Sadr City, killing five and wounding 10. Another bombing killed three civilians and wounded six in a commercial area in the central Bab al-Muadham neighborhood, officials said. Two other bombings killed two civilians and wounded 13, police said.
Medical officials confirmed the causality figures. All officials spoke on condition of anonymity because they were not authorized to release information.